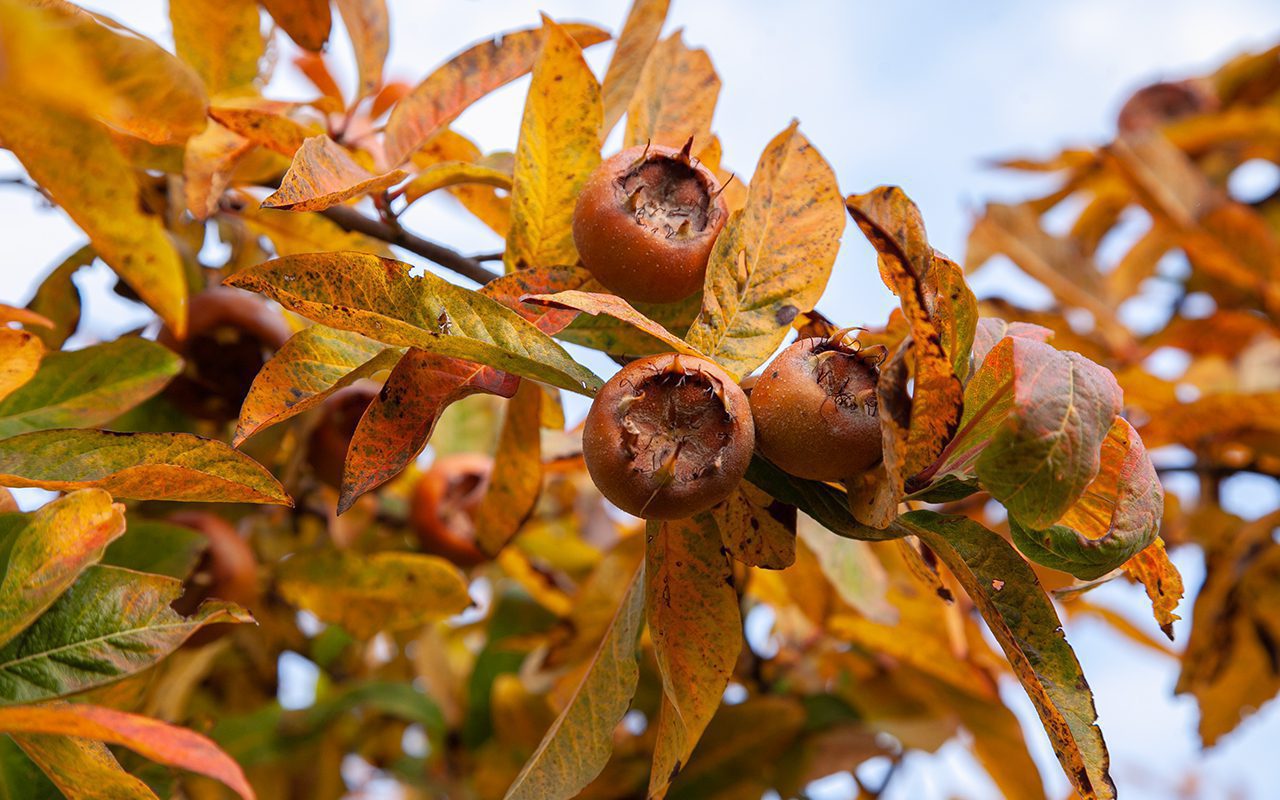 Twelve years ago this weekend we dropped the keys through the letterbox of our house in Peckham and headed west to the prospect of Hillside. The first few days and the quality of this last weekend in October are imprinted very clearly for being so new and suddenly in such a different environment. Where the skies were huge and not narrowed by buildings and where the season was manifest in everything and all around us. In the dew-heavy grass, the hedges beginning to show their winter bones and the apples pecked into cups by the birds that flocked to gorge on the windfalls in the old orchard.

The wind that moves with such ease down the valley and which we have grown to love on our faces had all but torn the last of the foliage from the poplars, their silhouettes clear against the flanks of the rise behind them. The newness allowed us to look deeply into every detail, more intently than you do when you come to know your environment. We combed the land, walking the line of the stream and noted where the farmer before us had pushed the fields as far as they could go to the very quick of the hedge-lines.

Friends who came to stay not long after we moved found the openness and pared back feeling of the land bleak, but we were besotted with our place in the landscape and loved everything about it. We could see the need for the starkness to be relaxed, for the hedges to be repaired where they were gappy from neglect and for the feeling of plenty to return to the land. In berries spilling from the hedgerows, in a new orchard I planted to come up alongside the grandparent trees that were the clue that long before these pastures there had once been a market garden.

The crab apples and walnuts that now help to nestle us back into the hill provide a stopping place for the eye and for the birds that we noted had nowhere but the hedges as respite. Fruiting trees and hedgerow trees felt appropriate and I began by planting a black mulberry in an area where I knew the land would not be changed when the time came to make the garden. Then, when the bone structure of paths were put in six years ago, the first plants to go in were a stand of the American Crataegus coccinea with its über-sized berries and a medlar.

Medlars and black mulberries have an ancient feeling about them, imbuing a garden with a feeling of age and cultivation. A lived-in quality which our land did not possess when we arrived here. Hailing originally from Asia Minor, the medlar has been in cultivation for as long as 3000 years. It was introduced to Greece around 700 BC and Rome five hundred years later.  In Elizabethan gardens they were prized for fruiting late and for their keeping qualities. The practice of ‘bletting’ the fruit, to leave it on the tree to be frosted, or picking it when it is still firm and letting it ripen like a pear inside, turns the fruit so that you are essentially scooping the fermented flesh from the leathery skin. A curious paste with an acquired but interesting taste, not so unlike a Medjool date. Just sweet and overly ripe, but delicious once you remind yourself to retrain your thinking.

As a fruit that was seen as being rotten before it was ripe, the medlar was used figuratively in literature as a symbol of premature destitution or prostitution. Chaucer and Shakespeare both referred to it bawdily as ‘open-arses’ on account of its distinct calyx and humorous association. The fruits were not only a delicacy in times past, but all parts of the tree were the source of herbal remedies to treat many ailments, particularly of the stomach. Their high iron content also meant that they were used for tanning leather. More recently the kernel oil has been used to produce biodiesel. It is surprising, therefore, when looking into things more deeply that today they are rarely considered for anything other than their ornamental value.

Wild medlars are a thorny, bushy tree from Asia Minor, originally thought to be closely related to hawthorn and listed sometimes as Crataegus germanica. Cultivated forms of Mespilus germanica are thornless, with distinctive long-limbed growth and an arch in the branching which can often result in a tree that is wider than it is tall. Up to 10m wide and 6m tall in an established plant, but easily half that on good behaviour. Being relatively short-lived, a thirty year old tree at the height of its maturity can also feel much older.

We have two trees here which have both been given space to reach. The variety ‘Nottingham’, which is a large-fruited form selected for almost seedless flesh is rangy in nature so it has been given a place all of its own above the plum orchard and makes a nice segue into the blossom wood above it,  which at this time of year is fruiting as prolifically. The second tree was a gift from Huw’s mother and is planted at the entrance to the garden just above the tool shed. It is an unnamed variety, selected for its multi-stemmed form, which I like here in the winter. Its fruits are smaller than ‘Nottingham’ by about half and they are as much seed as flesh, so not the best eating, but the tree has something special about it and already this corner of the garden feels held.

The large, creamy flowers come late in May and the tree goes on to provide a quiet presence in summer as its fruits swell. In early autumn you notice it again as the fruits weight the branches and begin to russet. The foliage then colours richly, orange and tan like a field maple, in the last of days of October. This distinctive time that has me back in the house on our first days here. Autumn giving way to winter and the smell of someone else’s damp carpets, but all the excitement of having arrived at the beginning of a new chapter.

In a week our tree will be bare and the fruits will hang on until they are bletted by the frost. They turn a rusty brown and hang long enough on the naked limbs to hold your attention. We let the birds and mice have the majority when they drop and enjoy their perfume as they moulder into November. A basketful of ‘Nottingham’, however, will make its way to the kitchen to be made into something wintry and with a taste of another time.