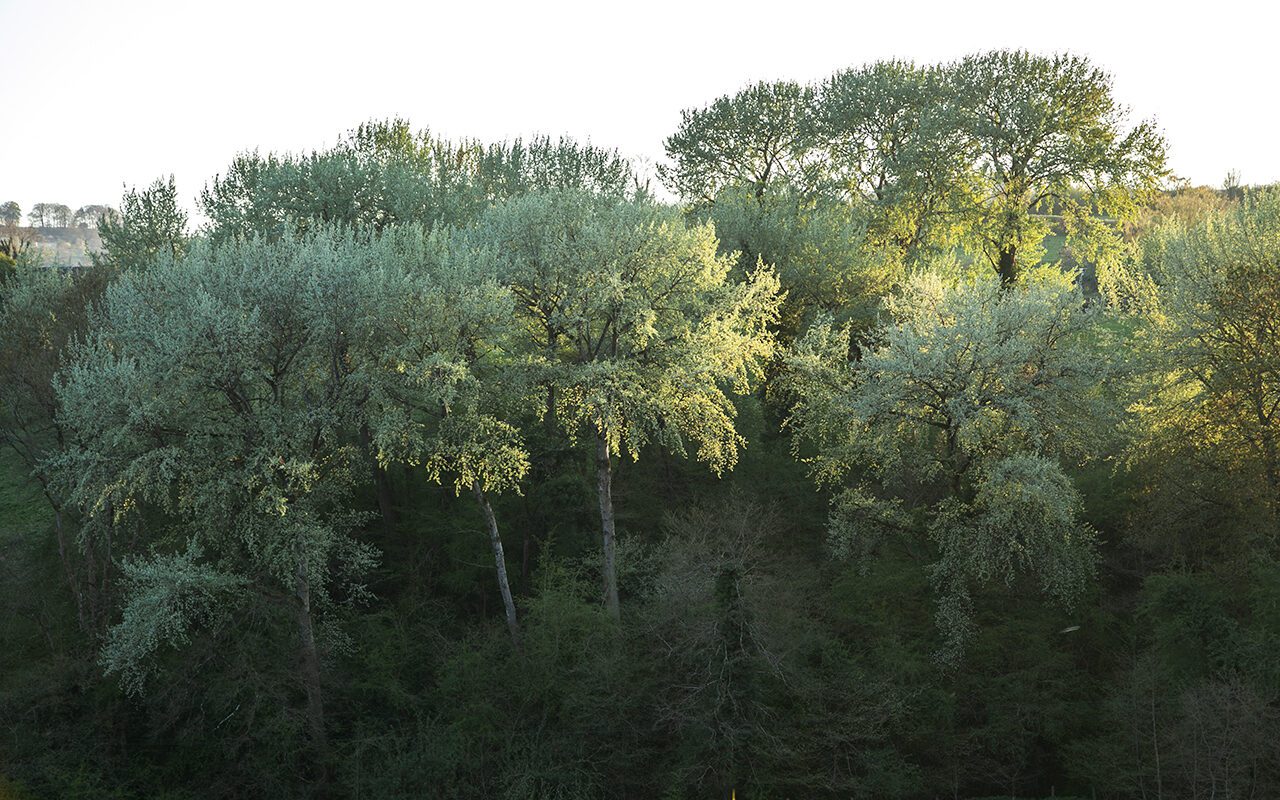 The poplars are the litmus. Standing tall and forming our backdrop, grey in all their parts and also in name, their ghostly stillness will let us know that spring is here when suddenly one day their catkins are caught by new light. That early, the wild garlic at their feet has already emerged to carpet the ground, shiny and lush and rushing whilst the wood is still open. Then, as spring gathers pace and the understory of hawthorn becomes green, the trees above assume their next chapter.

The last week of April this year is the moment you wish you could stall, the buds on the poplars breaking open in unison to shower the trees and once again define the extent of the of their canopies. You have to stop. Against a thunderous April sky, it is almost impossible to describe the colour, a mat aluminium. Chalky and luminous. Caught in the low evening light and with breeze in their limbs this backdrop is mercurial. Plumes of silvery ink dropped into water, shoals of fish; the mind tries to grapple for an image to describe the moment.

The truth is, the poplars are just doing their thing, at scale and in unison and marking a particular shift that we know now will take us rapidly through into early summer. One day the silveriness is sage-green and the leaves fill to tremble and hiss on the wind. With the unfurling, the now-flowering garlic is plunged into shadow, the bright white briefly brilliant, the wood smelling never more strongly as the understorey runs to seed.

The Grey Poplar, Populus x canescens, is a naturally occurring hybrid between the White Poplar, P. alba and the Aspen, P. tremula. The silver in the leaf from one parent and the flattened petiole from the other which allows the leaf to tremble and means that the poplars are rarely still in summer. Soaring with hybrid vigour to 30 metres they are loftier than either parent. They sucker up the hill and out into the light of the slopes to the other side and to date have not crossed the stream in their reach to conquer new ground. Living fast and outreaching themselves they do come crashing down, usually in full leaf and after an August rain. Once at night and just to the side of a camping party we were having on the bottom field by the stream. Everyone slept through it and came out unscathed. Another time one fell to take out the power lines which cracked and whipped like a snake in a snare.

In the time we have been here there have now been three that have fallen. After they have been limbed for firewood, we have left the trunks as makeshift walk-the-plank bridges. A wild bee colony has taken up residence in the “party tree’, the first to topple ten years ago. We are pleased not to have been too hasty to clear and to tidy completely and it will be interesting to see how long it will be before the bridges collapse under their own weight and decomposition. Poplar wood, traditionally used for panelling rooms and for workshop floors, absorbs both the sound and the blow of a tool to protect it from breaking if it is dropped. It is a soft wood and as it burns hot and fast when it is dry, it is also used for matches. Maybe the bees have already found the fault in the trunk that will bring the first of the bridges down.

At altogether another scale and entirely more manageable, I planted the whitebeam, or what I believed to be whitebeam in the blossom wood to take the silver up onto our side. Sorbus aria also has a delectable moment which is no more than a week of awakening. The leaf buds light the tree silver before it dims to a pleasantly grey-green. Unbeknownst to me the whips I was supplied with were the Swedish Whitebeam, Sorbus x intermedia. A wonderful tree for a seaside setting or an exposed site, but here it is already being left behind as the Geans and the faster growing trees in the blossom wood outstrip it. No matter. We will enjoy the mistake whilst it lasts as we do the awakening of the poplars when they are in their moment.