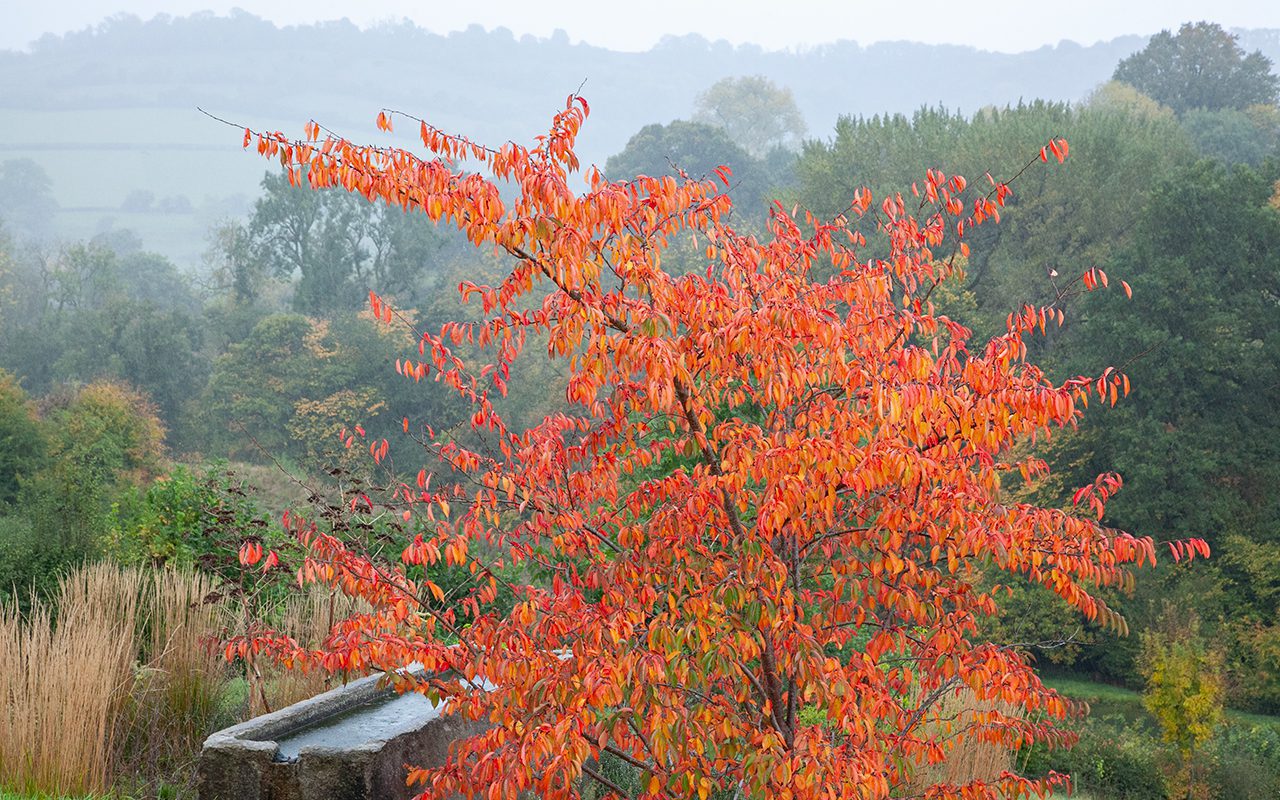 This time last week the garden was at its autumn peak and it coincided with the gentle best of October. The Dahlia australis reaching tall, but now on borrowed time with clear bright nights and a chill in the air. Asters at their most floriferous and still buoyant in a garden flush with colouring foliage and yet to be dashed by rain. The zenith of brilliant nerine and bright but autumn-soft sunlight shimmering in the miscanthus.

A run of clear mornings kept us spellbound at breakfast time when the light broke over The Tump. One ray grazing the dome of brilliant green where the meadow has replenished itself and then subsequent fingers reaching their way into the garden. The first threw a bolt into a gap in the hedge that passed in a direct line through the silvery seed heads of the tabletop asters to fall full-stop upon the last of the Kniphofia thompsonii var. thompsonii. It was as if the  pokers were waiting for the light and for a full three minutes they flared like candles. When it was over we looked up to find the garden awash, the ultramarine of the Salvia patens and the burning seed heads of the switch grass suddenly illuminated. And then the moment had passed. It was simply morning.

What a difference a week makes. Returning from a few days working away, the garden was weighted by rain and the tear of weather. The Anemone hupehensis had lost their petals and I had to retrain my eye where I’d grown used to their glow amongst the berries of the Scarlet Hawthorn. You have to embrace the change and its gathering pace once you feel the tilt, so earlier this morning we took another hour at breakfast time to follow the autumn colour. To trees that we have now encouraged for the best part of ten years and are providing the weight and bulk to make a show.

The Yoshino cherry (main image) is every bit as good at the end of its year and before it drops as it is fresh and alive with blossom at the beginning of the growing season. I like that it stands alone in the yard and becomes the point of crimson focus. Bigger and better than last year’s display and a marker to think about time before it falls back to winter twiggery. Perhaps your attention has been elsewhere in the activity of gardening whilst they have been quietly bulking during the summer, but it is a good feeling to stand back and take in the presence of trees you have nurtured and which, after a decade of growth, now feel substantial.

A young tree moving from youth into the beginnings of maturity can make you feel at scale with time and place. You have to stand back to survey their stature and to take in the time that in one way feels like it has passed all too quickly, but is also mapped so very definitely in growth. The vase-shaped forms of the Chequer trees now colouring so vividly at the bottom of the ditch are a good example. They were planted as feathered maidens no taller than my shoulder a decade ago and now we walk amongst them. The cloud of sweet smelling perfume that holds the hollow now that the cercidiphyllum have presence is also testament to them having the heft to make this place their own and we can now legitimately call it the Katsura Grove.

On a journey of their own making the stand of young hawthorn that has regenerated around the old pollard on the flanks of The Tump has changed this place entirely. When we arrived the pollard stood in splendid isolation and marked one of the last things the farmer did here before he died. The tree, as if to mark the end of that era, never regenerated successfully from his final lopping but, with a change of regime and lighter grazing, it is now all but eclipsed by a young spinney of Crataegus. Sown there, no doubt, by birds which would have rested in the limbs of the pollard, we have allowed the seedlings to come to something with a lighter touch on the land.

The wilder feeling in the land is good to see for its abundance in the autumn, with the Cornus mas now suddenly having weight along the ditch. We didn’t take in their russet colouring last year, for they had not yet begun to register, but this year they have presence. Their limbs are not yet touching, but you can begin to imagine that they might in the not so distant future. Forming a moment of still where their branches arrest the wind and where not so long ago there was nothing. They have made a place here and a backdrop for the blackening foliage of the Inula and the yellowing Equisetum. Somewhere changed by time, the benefit of patience and bettered for being generous.