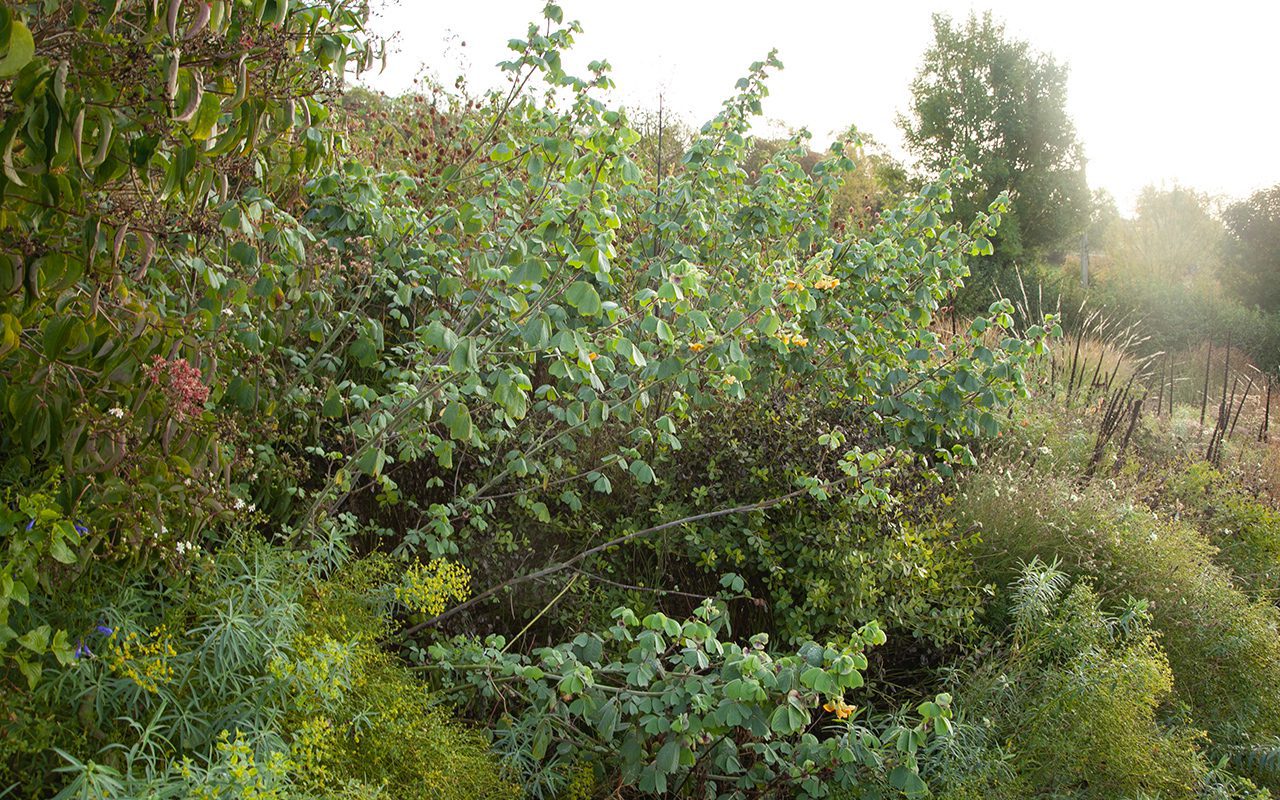 The Amicia zygomeris are eking out the good weather in this last mild chapter before the inevitable frost. They have taken this long to all but come to fruition with a flurry of pea flowers which are surprisingly opulent in their appearance at this closing moment of the growing season. Tilting outward and down from a yoke-like ruff of ink-stained bracts and glowing a warm, golden yellow in low sunshine.

My first plants originally came from Great Dixter when I was a teenager, but I do not remember where Christopher Lloyd grew them before he replaced the old Rose Garden with the Exotic Garden. This is where you will find them today, juxtaposed with other exotics and reaching boldly skyward. Hailing from Mexico, best advice in this country is to provide this sturdy perennial with a winter mulch, as you might a dahlia that you intend to leave in the ground. I followed these rules with my first plant, growing it against the only warm wall where the light fell into our woodland garden in Hampshire. I remember this plant with the same delight I feel about the ones here at Hillside all these years later, but I have grown in confidence about their hardiness and now grow them in the open with just a little shelter from the wind. Out of habit I mulched the plants here in their first few years but, now they are fully established, have found them to be perfectly hardy on our free-draining slopes and indeed they are reputed to be hardy to -10°C .

In the last weeks of the growing season anyone with a good eye will gravitate to amicia and enquire what it is, but in the first part of the summer it can easily go unnoticed. Rising latish in spring from a sturdy basal clump, its foliage is quite unlike anything else that we have in the garden. Quietly exotic and obviously a legume, the leaves appear in pairs and neatly as if they have been designed by a pattern cutter who enjoys a fold and an overlap. The leaves are blue-green with a distinctive indentation at the ends and a collar-like sheath where the leaves meet the stem. These stipules are stained reddish-purple and cluster more definitely at the apex of the stems where, toward the end of the season, they shelter flowers.

Amicia makes itself known in the garden sometime in August, when it gathers quite a presence. The tailored foliage is smart and always in good condition and if you visit it as dusk descends you will witness the leaves folding up for the night. By now the plant is shoulder high and continues to become bolder and more sculptural. However, it isn’t until October that the brew of buds become visible and then, as the evenings cool, a weighting of the stems and first flowers. It is just about the time you are beginning to fret about how many days you have left before the dahlias are wilted by frost, but they take this fortnight or as long as they have left to grace you with flower.

I have never seen amicia set seed, because the frost strips everything back to the base and so they never complete their life cycle. That said, they are reliably clump-forming, have a long life span and do not cry out for division. I suspect I will only need to move them if they become overshadowed by the company of the neighbouring heptacodium, which provides wind shelter. Before this happens, I will take cuttings to futureproof against potential failure. Basal cuttings at the beginning of spring, internodal cuttings in July or semi-ripe cuttings in October provide ample opportunity to keep them going. A handful of plants is always a good thing to have on stand-by, I find. For the simple joy of making your own plants or to give to the friends who discover amicia late in the growing season, inquisitive about this curiosity and its quiet but very definite identity.