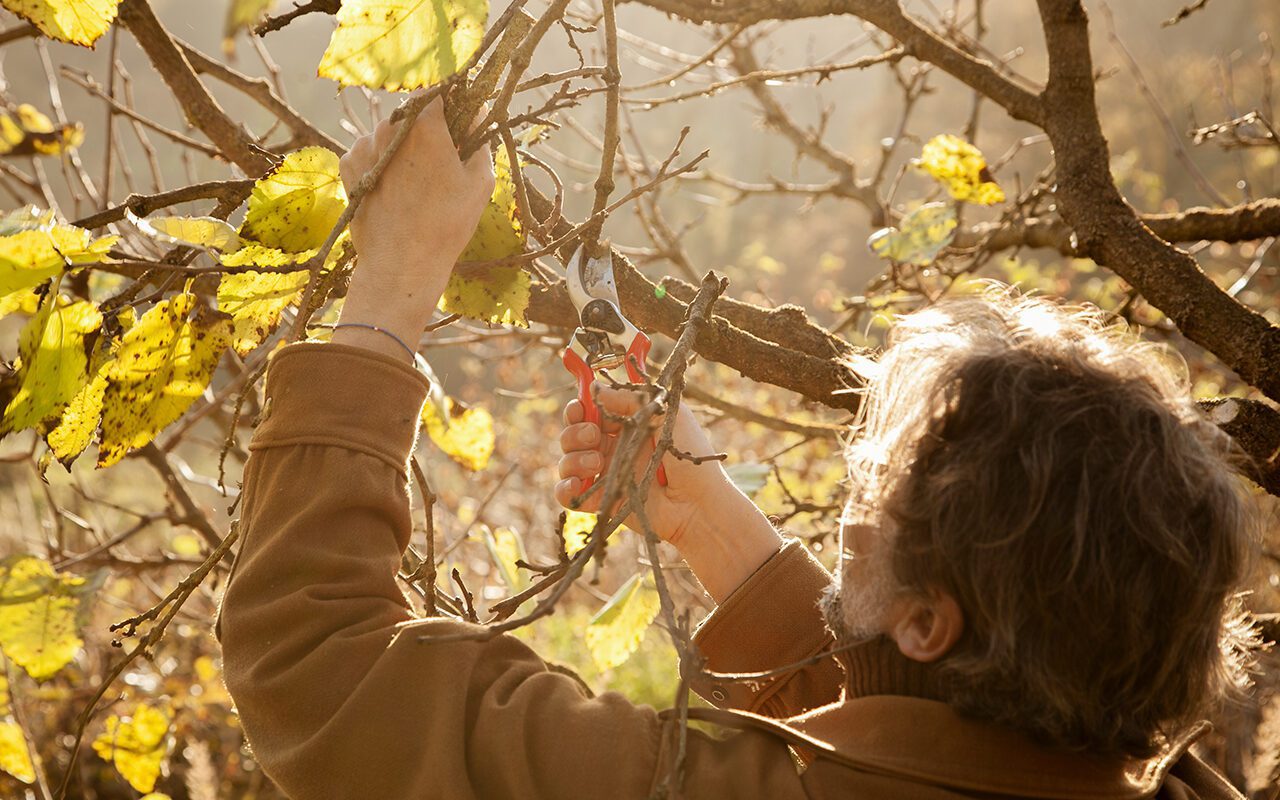 Cultivated in England since the early part of the 16th century, the black mulberry is a tree that has a timeless quality. A ruggedness that speaks of previous custodians, of care and cultivation and lives lived around it. A mature tree, squat and always rounded, shows the decades in its fissured bark and the mosses and lichens that find a home there on twisting limbs. Limbs that often reach to the ground under their own weight and lean on elbows to root where they have rested. If you step inside the cradle of branches you find a leafy world within, the lush foliage hiding bloody fruits, like sharp, juicy loganberries, that stain your hands and mark your appetite in August.

As Morus nigra have been widely cultivated for so long, it is not known from where exactly they originated. Mesopotamia and Persia are listed when you try to understand their requirements and, though vague, this does explain their desire for a warm position and their preference for southern England. As temperatures warm their range will surely extend slowly north so they may well become more widespread as vineyards move up the country. They are often grown in association in Persia since the conditions vines favour are typical of their preferred habitat. Warm slopes and free drainage. Somewhere that basks in sunshine.

Morus nigra was mistakenly introduced into this country in the belief that it was the fodder for silkworms. The white mulberry (Morus alba) – the real food crop of the silkworm and a bigger tree – has inferior fruit and less charisma in a garden. However, you will often be sold it as a substitute since they are more easily grown in the field. Black mulberries are rarely sold as large plants and are most often containerised and supplied as feathered maidens of not more than 1.5m. That said, they are not as slow as you might imagine and begin to show character remarkably early in life.

Our mulberry was one of the first trees I planted in our first winter here in 2011. Though I only had the garden in my mind’s eye at that point, I placed a young maiden in the rectangle the farmer before us had carved out of the field to grow his brassicas. Now that I know the land better and the winds that race down the valley, I see why he had put his only growing patch just here. It has the hedge behind it and the shelter of the house not so far away. Despite the fact that there were no trees here initially, I instinctively knew that a mulberry would be my gateway tree to the garden that one day would follow. A tree that would eventually hug the hill and make this place into a garden as it matured and brought with it that certain gravity.

Planting trees early in a project is a rewarding milestone with time mapped in new branches. My youngster, with all its promise, sat amongst the rotations of our temporary vegetable and perennial trial garden for the following five years. Every year gathering a little more strength and presence and slowly making us work further around it to ensure its well-being. By the time I finally made the garden in the summer of 2016, it was already the deciding factor for where the paths would sit to either side. One grass path to the rear and the other – the primary route into the garden – on the sunny side. Ten years in, and with the garden now grown around it, the tree has already formed its own microclimate, a pool of shade beneath, where pulmonarias and snowdrops trigger spring and a place on the grassy walk behind where the grass is cool and shady on a summer’s day. Together with the medlar which is planted nearby, it already gives this young garden a feeling of age and establishment.

Though in time I know my tree will become idiosyncratic, with limbs and character that I could never plan for, I like to set a young tree in the right direction with formative pruning to establish a good framework. In the case of the mulberry, the structuring of the tree is also to keep it open with free air movement, because in the last couple of years we have slowly seen mulberry leaf spot wither the lush foliage in high summer.

Leaf spot, a fungal infection caused by either Cercospora moricola or Phloeospora maculans, is quite common on mulberries. It is noted that the fungus is most prevalent in wet conditions, and recent outbreaks in Turkish orchards have followed mild, wet winters, so we avoid watering near the tree on the rare occasions I put out the oscillator. This year we also applied a neem oil spray every fortnight as soon as the tree broke bud, which had a noticeably positive impact. Of course, come a busy August, there wasn’t time to be consistent, and so spraying stopped, but the tree has done better for it, only showing signs of infection again in September. We have cleared the fallen foliage to remove the spores that fall with the foliage and hope as time goes on that it will be only be a problem in wet summers.

Mulberries bleed to their detriment if you prune in the second half of the winter, so I do this in late autumn as the leaves drop and the sap is being drawn back. It is an easy and meditative process and I remove a small amount only, to thin the limbs and not trigger sappy regrowth. The time spent with the tree allows me the opportunity to imagine the branches reaching out and over the paths one day. An easy reach for a luscious berry as we enter and exit the garden and take pleasure in the knowledge that with time this tree will only get better.