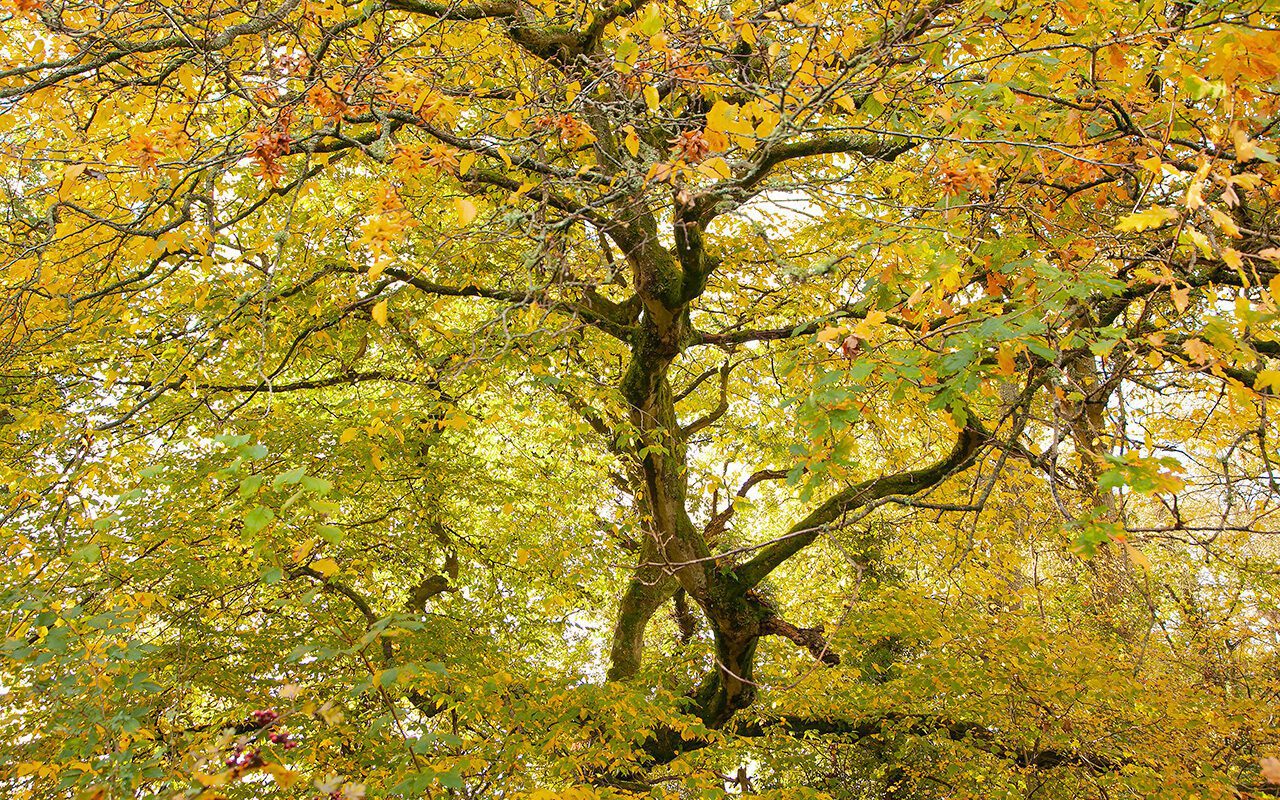 At the bottom of our hill, where the stream runs along our boundary, everything changes. The stillness there is a constant, even on the days when we descend the slopes to escape being buffeted on the higher ground.  Although it now stands tall, the wood that runs our neighbour’s boundary is not so old. Glad, who lives just behind us remembers being able to see the slopes on the other side when she was a girl, eighty or so years ago but you can see signs of ancient woodland in spring mapped in colonies of wood anemone, bluebell and, in one place, herb Paris in the places where it must have stood for longer.

It is interesting to imagine the push and pull that must have happened over the decades with the management of the wood and the open ground respectively.  When we moved here ten years ago this very weekend, the land that runs down to meet the stream had been grazed hard and the ankle twisting ruts that the cattle had made in the clay ran up to a twist of barbed wire that hugged the stream edge. The battle the farmer had made with the wood to keep it back was traced in bluntly severed limbs and an ongoing tussle with the brambles that were leaping from the wood across the water. We made the removal of the wire and the encroaching brambles our first winter job, so that we could see the lie of the land and the path the stream had cut in the valley.

The following summer I fenced off the lower slopes of the Tump, tracing the line where the farmer dared go no further down the slope to cut the hay. The plan was to bring the wood back over the stream to our side in a swathe of trees for coppicing on an eight to ten year rotation for firewood. The young saplings were planted over four winters. Hazel made the foundation and the majority, whilst small leaved lime, sweet chestnut and hornbeam were added to ascend above the hazel for shade. Managed on a slower cycle of twenty years, the tall trees in the mix will make fencing poles and wood for the burner. The first hazel should be ready when I am about sixty and the larger subjects should be mature enough for their first cycle of copping when we are pushing seventy. A good incentive to stay nimble, but in the meantime a joy in the coming together of this new environment.

Seven or so years in and we are beginning to see the changes. The tussocky sedges that told us this was heavy, wet ground are slowly being shaded out, the advance of the wild garlic has begun stepping out from the small groups on the stream banks and the roosts and runs of the animals that live here are already in evidence.

I took time to look at the established wood to see which trees did best immediately beside the stream because without tree roots to hold the banks, we were vulnerable to erosion on our side.  It is only where we have occasional alder that their thickly matted roots hold the stream banks sufficiently to bind them. The alder, however, are not shade tolerant and as streamside trees they would ultimately not be ideal in the coppice. The shade tolerant hazel do not have a root system that holds the stream banks, but looking at my neighbours mature hornbeam, it was clear that they were both good in shadow and also in holding the banks. Where they sit by the stream it moves around them and in the spring you can see the influence where the garlic laps up to their root plate to leave mossy circle free.

The fibrous roots of hornbeam (Carpinus betulus) can be hungry in a garden and you can see that alongside a hedge where company grows less easily, but for the streamside they are ideal. So this is where the majority have been planted and they have shown their tolerance of the thick heavy clay here too, throwing sturdy growth and showing that they have taken to their position.

I was brought up with the ancient hornbeam coppice that grow on the downland where I spent my childhood. Some of the old stands were hundreds of years old, the timber the fuel for smelting iron and making charcoal. Known locally as ‘bluntsaw’, for the wood is one of our hardest and consequently hottest burning, hornbeam has also been used for making yokes for oxen and clock parts for its strength and ability to withstand wear.

Currently, in this last couple of weeks of autumn, the hornbeams are flaring yellow so that you can see exactly where they are in the wood. As young trees in winter and cut to retain juvenile growth as hedging material, hornbeam retain their foliage. Russet brown and rustling nicely in wind, they provide fine protection for winter birds. Holding onto their seed late, they are hung with the papery bracts for some time yet before the windborne seed is liberated or eaten by the birds before it has a chance to spiral down. As hornbeam mature their trunks develop a smooth and undulating musculature which makes a coppiced tree all the better for winter interest in the wood. Spring is heralded in pretty catkins that festoon the branches with countless creamy verticals. April foliage is the brightest of greens and in summer the pleated leaves are host to a wide range of moths that use them as their food source.

Though in summer the canopy casts a dense shade, the elderly branches reach widely and elegantly and hold their own and very particular place in the wood. A hornbeam can live to three hundred years or longer if it is coppiced. They wear their age well so it is good when we see such progress to ponder the lives of our youngsters. Happy here it seems and making the place their own.