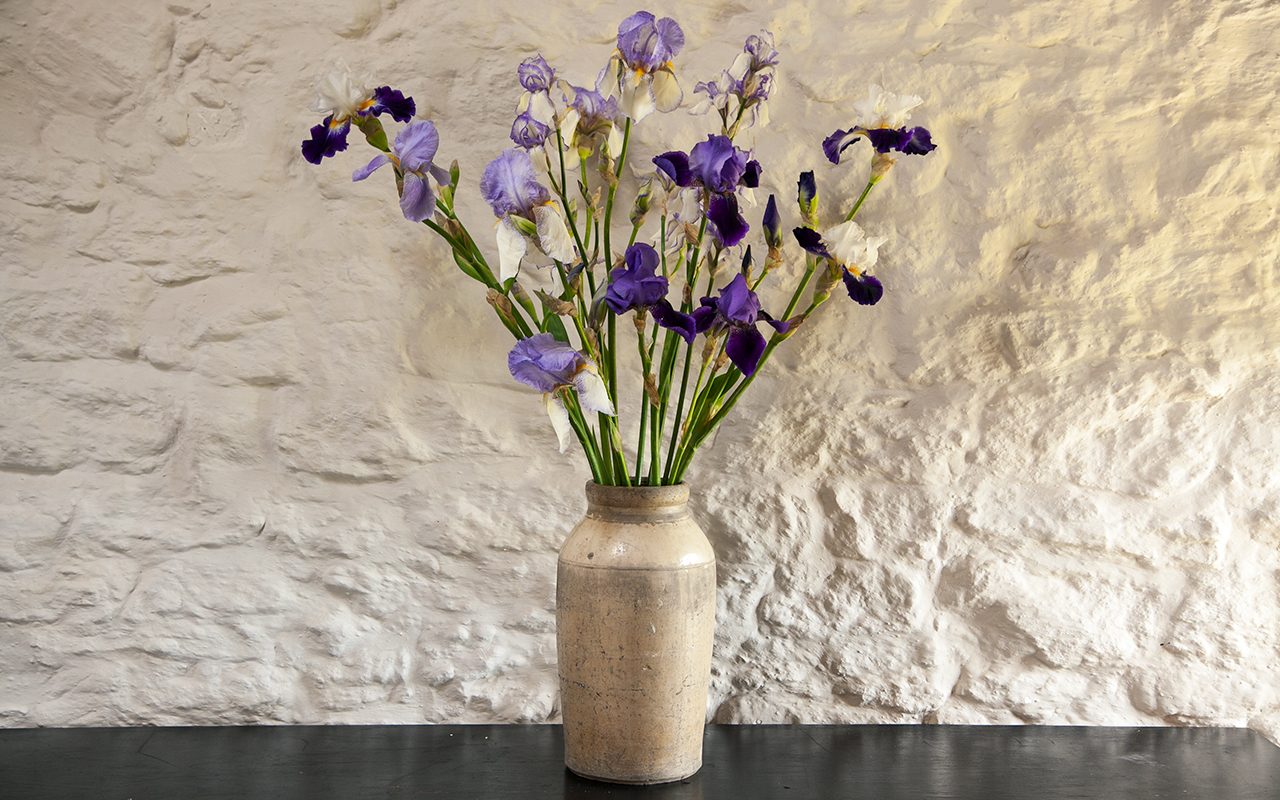 The dry spring has been good for the bearded iris, their growth starting early and rapidly converting the energy stored in their knuckly rhizomes. We have them growing against the warm walls here and in splendid isolation so that they can bask in the sunshine and out of our wind to spare them from tatters. Light caught in their flattened foliage, designed like sails to harvest every ray, you need to be there to watch from the moment they stir. The leaves are full of promise well before you spot the first flowering stems, sheathed still and backlit then suddenly visible, spearing free into the air. Racing to bud they are the epitome of expectation. Papery sheaths encase a tease of tightly wrapped colour, the growth slows as they ready. Then, one morning, the first miraculous flower and then daily more over the three weeks or so until their peak.

When we moved here I set up a trial of bearded iris on our south-facing slopes in order to get to know the plants that I thought would do well here and that I would like to get to know better. You need to have room to grow bearded iris or to commit to letting them bake once their flowering season is over. Until moving here I had gardened with them tentatively, giving over a small area of precious sunshine here or there, but always pining for the room to grow them freely and en masse, with one against the other.

In the spirit of research, I spent a glorious day in the iris fields of Woottens of Wenhaston with the late owner and iris collector Michael Loftus. I was looking for good form, nothing that felt too overbred and debilitated by ruffles, and I was hunting down good colour. Some deep and saturated, others less definable or with the complexity of veining and picotee.  I kept an open mind within this remit with the aim of honing a palette and came away with an extensive list of 56 that spoke to me whilst I was there.

We observed the trial closely over the next five years, each season revisiting those that came to the surface as interesting and repeating the editing exercise to select the keepers. In the sixth year I made the final selection and so, after flowering and as the plants were going into their summer dormancy, I invited gardening friends to come and collect the divisions and liberated spares. It was a Saturday morning free-for-all, every bit as good as a jumble sale and uplifting for having whittled out the favourites and having sent the rejects to appreciative homes.

Twenty or so Benton iris, bred by the great plantsman Cedric Morris, which had very quickly come to the surface as right for the mood here, were planted against the hot, south-facing wall that backs the herb garden. His selections had a natural cohesion and I wanted to keep them together to see what he had seen, unadulterated. There were another dozen or so that we found impossible to part with. The hot flanks of the granite troughs became home to a handful of blues, a black and a thunderous purple, whilst the misfits went up to the barn wall where we grow those plants that don’t feel right in the garden, but make for good cutting; peonies, roses, sweet peas, dahlias and sunflowers.

The jarful you see here is a selection of the blues. Blue is not a colour that feels right in the main garden. Perhaps because the light is so bright all day on the open slopes. Blue is best in the gloaming or in shadow when it glows and hovers. It is lost, fugitive and hard to claim in bright light. Visited early in the morning or picked and brought inside where the dim brings out their luminosity, they come into their own.

‘Mme. Chereau’ is the first to bloom here and though the flower is small and delicate, it stands easily as tall as the majority at about 90cm. Bred in 1844, it was one of the most sought after iris of the 19th century. Described as ‘Hortense violet over creamy, ruffled falls’ in early iris manuals, it registers as pale from a distance. Though prized for the undulations in its standards and falls, the ruffling never overwhelms the flower which is small and perfectly proportioned. I love this iris and keep it close to the herb beds, where the green cushions of lavender are mingled this early in the season with denim blue flax. ‘Mme. Chereau’ is also delicately scented.

‘Nassak’ is planted close to ‘Mme. Chereau’ for its similar mood and colouring, and for the joy of the scale change. Bred in 1938 marbled sky-blue standards hover above white falls with exquisite blue stitching. The flowers are large and need the shelter the trough affords them from the Westerlies. Of all this bunch this is the most heavily scented. Zesty and opulent in equal measure and perfuming the whole of the boot room.

We kept ‘Tishomingo’ as it stood out for its simplicity. Bred in 1942 and described as a ‘Wisteria blue self’, it is blue throughout with the exception of a pale veined throat and golden beard. I liked it because I could see it in a silver and grey planting and quite simply didn’t want to overlook it for being so simply itself. An elegant plant with ease, poise and stamina when the wind blows. Pick it and you immediately notice its citrus perfume.

‘Benton Nigel’ was bred by Morris in 1956 or thereabouts and, of the Bentons we have here, makes an exception amongst its siblings for its saturated colour. Dark violet standards are underpinned by the richness of the inky purple falls, which glow more deeply for their paler, light catching margins, as if the petals were lit from beneath. This is an impeccable iris, well-behaved and clean in appearance.

‘Noctambule’ is the misfit amongst the misfits. A Cayeux iris bred in 2007 (the name means Night Owl in French), it feels decidedly different from the rest, with white satin standards and inky ruffled falls thrown out almost horizontally. At just over a metre in height it also has a stature that puts the others in the shade. Far too glamorous and exotic for this country hillside, I have been in two minds about keeping it since it first flowered here over 8 years ago. Somehow, however, it has always had a stay of execution. Various friends who have seen it have said, “You can’t let that one go, it’s incredible!”. My mother, who is staying with us during lockdown, was drawn to it too and we cut a stem for her bedroom. And so now its fate is sealed as a keeper and, as you can see, the contrast in the bunch is enlivening. The nearest to a black and white iris bred so far, squint in sunshine or see it at dusk and you get the impression, but the falls are really the richest, most velvety purple ands there’s no denying, it’s quite the distraction.