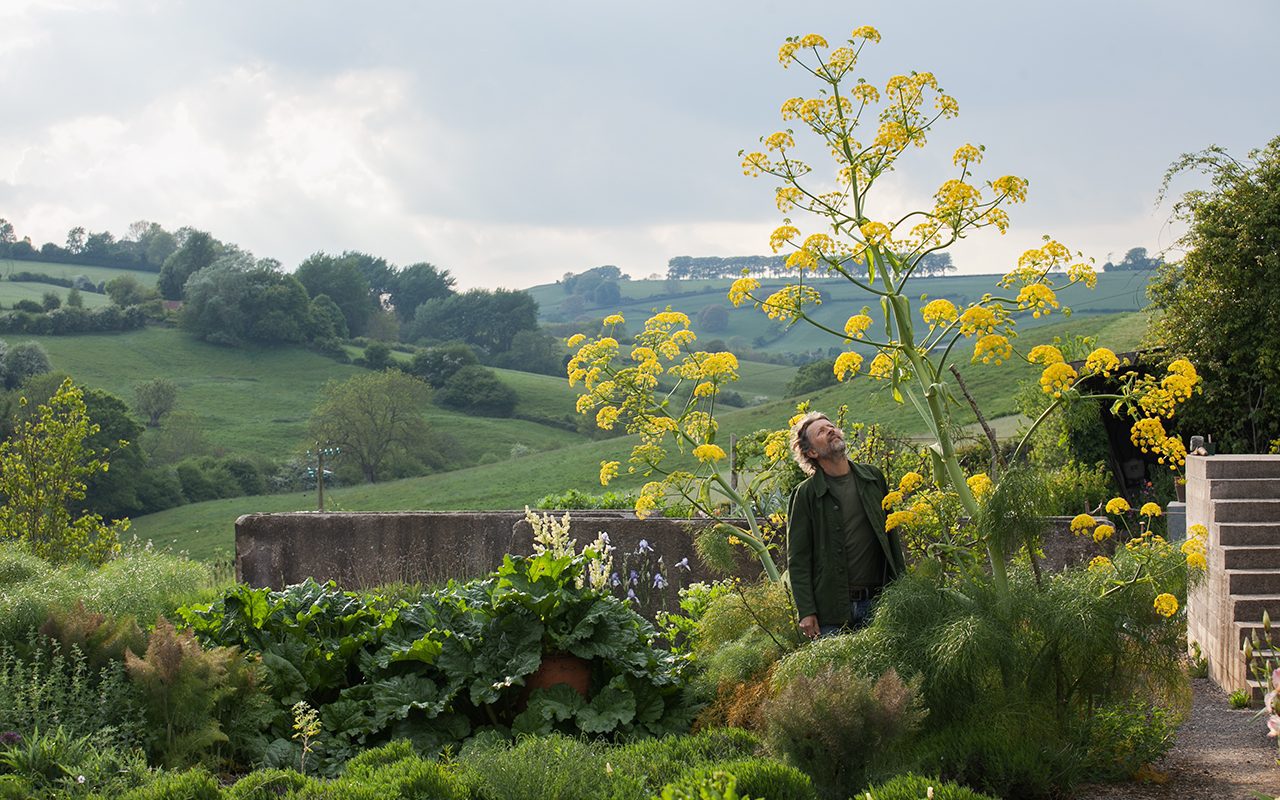 The Ferula communis came to fruition last year after two seasons in the ground readying themselves. They bolted skyward like Roman candles and we stood in their shadow to wonder at the enormous surge of energy, summoned from the deep and tracking the awakening spring. The expenditure of those that flowered last year sees them resting now, hunkering down to nothing but foliage to build their reserves. It is too early to say how many cycles they can sustain here before they give up and make way for a new generation, but for now I am pleased that they have staggered themselves and will ensure I do not go without a spring in their company.

As if the group in the herb garden had been in silent conversation, this year’s flowering plants have distributed themselves rather nicely, throwing four fresh spikes to articulate an easy distribution. New leaves were already pushing from dormancy in November and they sailed through the wet winter with our slopes draining easily.  Mounding slowly through the cold season and pushing against the stillness elsewhere, the netted foliage remained untouched, easily coping with wind and bowing gently but recovering after the frost. They kept their fine structure, the snowless winter sparing them its potentially damaging weight. So, by late February, we were already parting the growth to check for the fattened, flowering stems which were already preparing to move with the lengthening days.

It is easy to spend time with the giant fennels, for their rapidly moving architecture has an animalistic quality. Armature and sheath unfolding, tendoned limbs extending as they move always upwards, the day they peak is the day you see the beginning of summer. Buttercups rising above the grass. The first poppies and leaves flushed on the trees. We are lucky to have the room here for several colonies to test different varieties and in differing situations. We are bathed throughout the day in sunshine, for they would not do well without it.

The Tangier fennel, Ferula tingitana ‘Cedric Morris’, is the first into flower and grows against the espalier wall that it shares with the pears. They are taking a fallow year this year after flowering plentifully last,  but their distinctive, shiny foliage is good even when they are taking some downtime. Although the giant fennels are said to be short-lived as a tribe, they are proving to be reliable here where they are never overshadowed in a planting and this seems to be a general rule for their well-being. The ‘Cedric Morris’ came with me as seed from the Peckham garden and establishing seedlings when they are young is the best way to ensure happiness. I keep a few generations on the go in the cold frame so as to always have a spare or two to keep an age-range but, as with most umbellifers, their roots dive deep to provide the foundations for their great bolt of flower, so they should never be allowed to become pot-bound before planting out.

I have several forms of Ferula communis, the larger-growing cousin and close relative to the Tangier fennel, all of which were given to me by Fergus Garrett at Great Dixter. Immediately in front of the house and in the yard below it we have Ferula communis subsp. glauca. This is the most elegant of all, in my opinion, for its slender limbs and burnished dark green leaf. I have planted it amongst the rockscape of the re-imagined Delos Garden I recently designed at Sissinghurst. We sourced the plants from Olivier Filippi in southern France and, although young when we planted them in the autumn, I could immediately see that his form of F. c. subsp. glauca was distinct from the Dixter form.  Finer, more wiry and exhibiting a variable trait, which is common in a plant that has such a wide distribution across southern Europe and into Eurasia.

The straight Ferula communis we have growing in the herb garden (main image) has paler, more netted foliage. It is the largest growing, the flowering stems being as thick as my wrist and rising to three metres tall over the course of a month. Despite their open position here on our hillside,  they still search for the light and the stems each chart the sun’s movement due south to show you their desire. After a heavy West Country drizzle last week we woke to find the tallest two having toppled. Grown too fast and furious on our fertile ground, they have probably just been a little spoiled and lacked the stamina of the plants that find their way into crevices on the rocky slopes of their homelands. We spent an hour before breakfast carefully staking and hope that, as the acid-yellow flowers go on to produce the weight of paddle-shaped seed, our endeavours will not be further challenged.

In the main garden we have a possible cross between Ferula communis and F. tingitana. Passed to me in a brown paper bag by Michael Wachter, one of the Great Dixter gardeners, with words on the bag stating “From Fergus. F. communis. Tingitana blood”. It has risen to flower this year for the first time. The foliage is more feathery again that F. communis and consistently so across all the seedlings. I have planted it with scarlet oriental poppies pushing up through the foliage to remind me of the first time I ever saw giant fennel in the Golan Heights with scarlet Anemone pavonina. Planted on the south side of the fennel foliage so that they do not get overshadowed too early in the season, I have added an early flowering pea, Lathyrus rotundifolia. With Turkish origins (which means that it is also an early riser) I plan for the pea to rise up into the net of the fennel foliage and then go on to scale the lofty tower of flower. The pea, I am hoping, will climb tall enough for the soft, carmine flower to mingle with the sharp brilliance of the fennel in flower during May and June. Both the pea and the fennel will be over and gone to seed by the time the rest of the garden has taken over in July. The pea rupturing its drying pods on a hot day with a distinctive crack and patter of far flung seed. The fennel foliage withered, to leave nothing but the architecture of the flowering stem and seed held high to be caught in late summer by wind and distributed. You have to be ready for the hole when this happens and plan for it not being a gaping one. We have Salvia ‘Jezebel’ planted in front to make late cover for the small inconvenience of bare ankles.