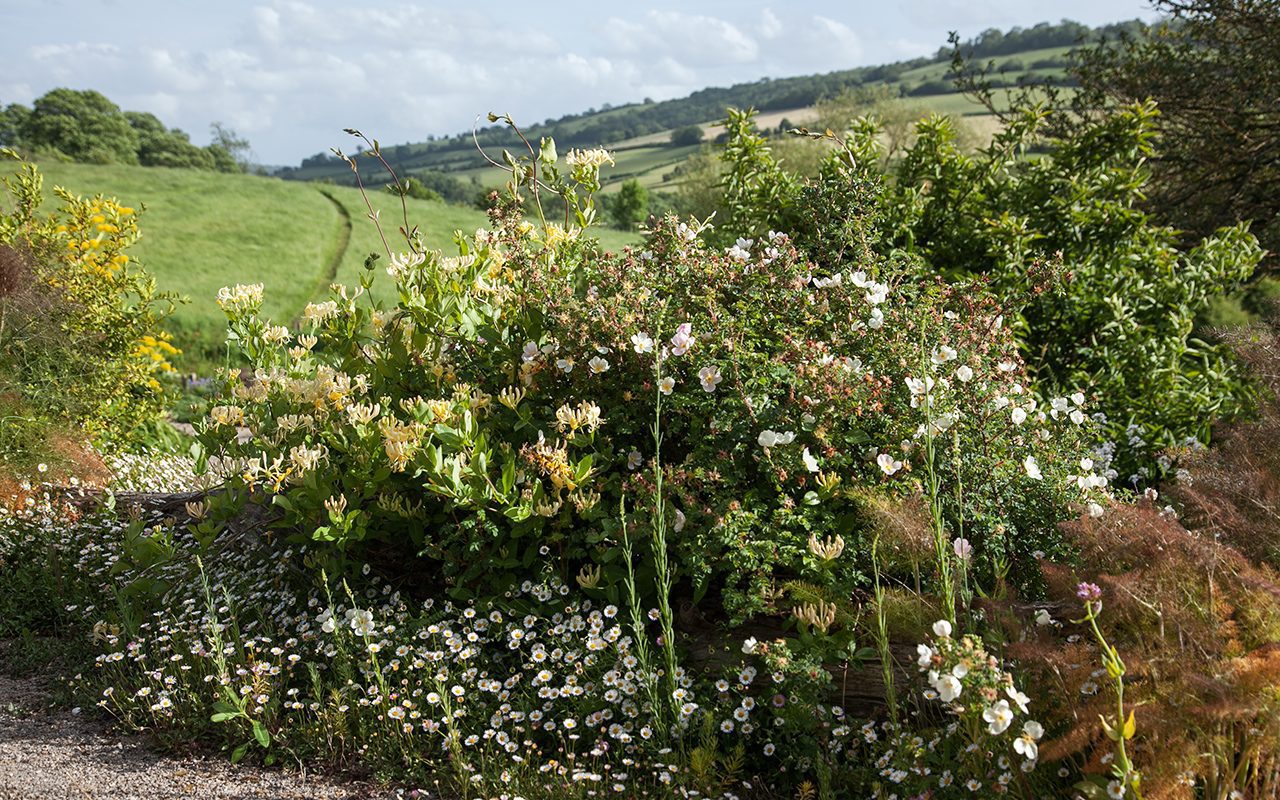 When we arrived here the smallholding aesthetic, with its ad hoc manner of making-do, ran right up to the buildings to keep anything growing at bay. A brutal concrete slab sloping down and away from the lane surrounded the end of the house, diving steeply between it and the little barn below, where the cows were once milked, to form a yard. From there more concrete ran along the field before climbing steeply again towards the big barns, where the troughs now screen the kitchen garden from the house.

The track had been made in sections, as and when materials were available and potholes needed filling, so your first experience as you arrived off the lane was dominated by negotiating this necessary evil. You either had to park your car at an angle that spilled the contents when you opened the doors or prepare yourself for a vertiginous descent if you drove down into the yard. You certainly weren’t getting back up easily if the weather turned in the winter.

We muddled on for the first five years of being here and partly liked the authentic feeling of it, but I knew that it would eventually have to go so that the house could be cushioned in green again and not divided from it. After we renovated in 2016, we removed the concrete and reoriented the track behind the buildings and built a level platform at the end of the house. Flat ground is limited here, but even the smallest amount helps you to feel grounded enough to lift up your eyes and take in the view.

I wanted this pull-in from the high-hedged lane to be a little breathing space, to not give too much away of what was to come and to welcome you into an eddy, a pause with a feeling of rightness.  I planted black-catkinned willow to form a semi-permeable boundary, so that you only got glimpses of the garden beyond and encouraged Erigeron karvinskianus, Centranthus lecoqii and white linaria to self-seed in the gravel. Viola odorata, which doesn’t mind the exposed position because it has company, reappears when the Mexican daisy is dormant in winter and when the sun shines in February they liberate their perfume to catch you unawares .

Perfume was an important consideration for this first impression and a scented ambush shoulders your descent down the steps to the front of the house. A seed-raised Rosa spinosissima, which we collected from Oxwich Bay on the Gower peninsula, sits to one side and hunkers down to form a little thicket. The first flowers opened in the last week of April this year and, although the perfume is delicate, it is delicious when you catch it for the month the bush is in flower. I’ve been training a honeysuckle along a log we’ve used to define the edge of the entrance platform, but now the briar is large enough I’m letting the two intertwine. The honeysuckle is a selection of our native Lonicera periclymenum called ‘Scentsation’. It’s not the best of names, but I have not seen a form that flowers as freely or grows as compactly. And it does live up to its name, perfuming the air sweetly and causing you to stop and linger when the wind stills in the evenings.

The second perfumed shoulder by the steps, held in the angle of the building to the other side is Philadephus ‘Starbright’. In its third year and beginning to have enough impact to create a presence here, we now have enough flower to perfume the breeze. In terms of scent, mock orange is a perfect description and is placed for best effect so that the wind blows it towards you. I don’t expect it to get much taller than it is now, topping out at about eight feet and six or so across for this P. delavayi x lewisii cross is modestly sized. The larger growing Philadelphus coronarius is beautiful in June with clouds of fugitive blossom but, for the remainder of the year, they are not the most interesting of shrubs.

‘Starbright’ has an open habit, never heavy, is upright but not stiff and remains open. Though it also settles into a quiet shrub for the rest of the summer, it is good in the lead up to flower, pushing plum coloured growth and first foliage. The dark staining travels into the calyces of the flowers which, against their brilliant, pure white, appear as dark as if they had been charred. Now that our ‘shoulders’ are large enough to spare some for the house, this week we have been picking combined bedside posies of mock orange and honeysuckle. Both have a fresh, zesty perfume, but the philadelphus is easily distinguished in a posy. It is evenly scented both day and night, while the honeysuckle is strongest after dusk and through into early morning. It has been waking me throughout the night, breaking my sleep with waves and pulses of perfume. I like the thought of it seeking the attention of night time pollinators and am happy that we now have enough to bring into the house to feel the full benefit ourselves.