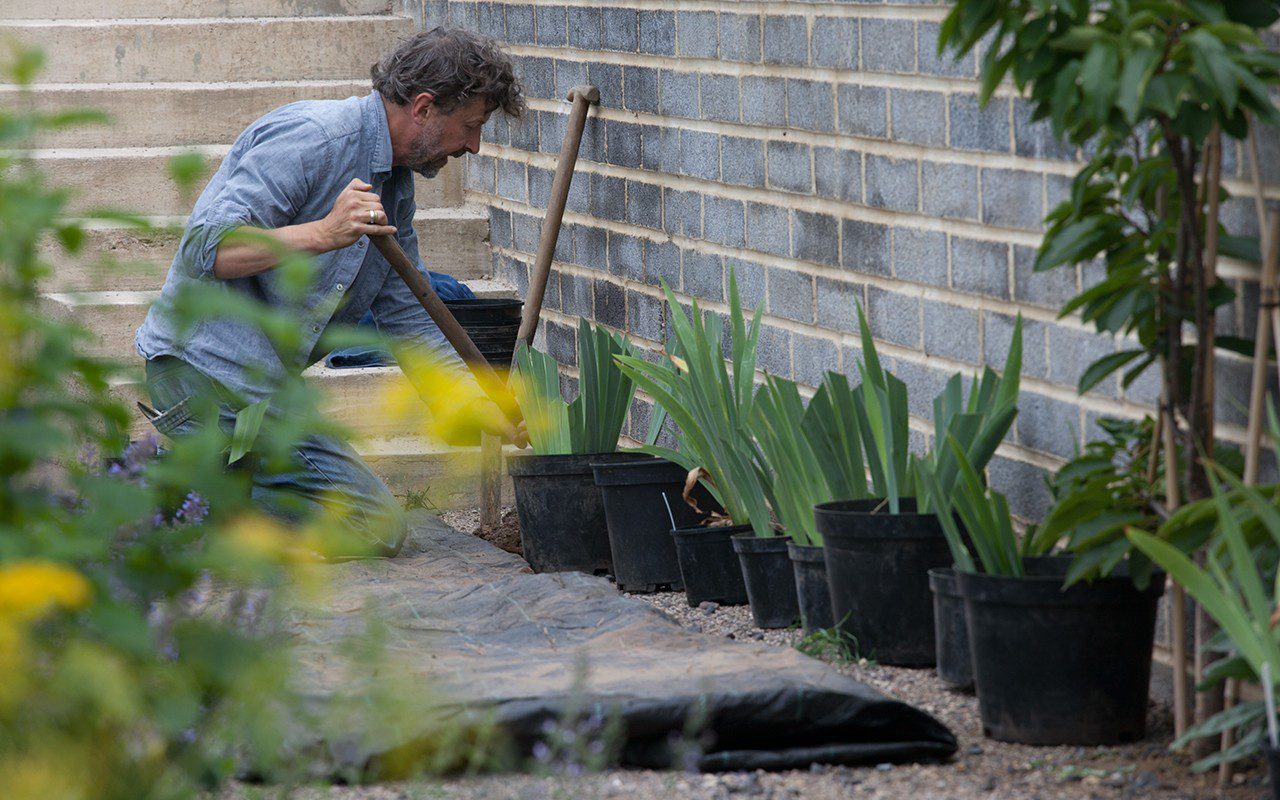 Not long after moving here I planted a trial of bearded iris. I’d been inspired to do so by our hot, south-facing slopes and the possibilities that came with having space. At the time I was also in the process of replanting a Lutyens and Jekyll Arts and Crafts garden for a client. The iris felt right for the period when the garden had been in its heyday, so I made a research trip to Woottens of Wenhaston to see their famed collection. Their extensive fields fluttered with hundreds of varieties, which were thrown together as far as the eye could see. It was an unforgettable moment. Even with the exercise of some restraint, I still came away with a list of fifty-six that I wanted to trial.

Of those divisions that arrived bare-root in their period of summer rest that July, three plants were of Benton heritage. I did not know it then, but the Bentons have refocussed and refined my iris eye. It is only when you grow plants for yourself that you get to know the best for your purpose and your true favourites. The trial revealed varieties that I had been seduced by in the field, but that in truth were easy to part with. And I did part with a lot. I was interested to find that of all the colours trialled it was the dark blues and purples, the colours with which bearded iris are perhaps most commonly associated, that looked most out of place in the landscape. I also dispensed with all those that felt overbred, with too much flounce, frill or rigidity to give the flowers real grace. However, once our focus fell upon the sophistication of the Bentons and we started to seek out more, the trial grew as quickly as it shrank. 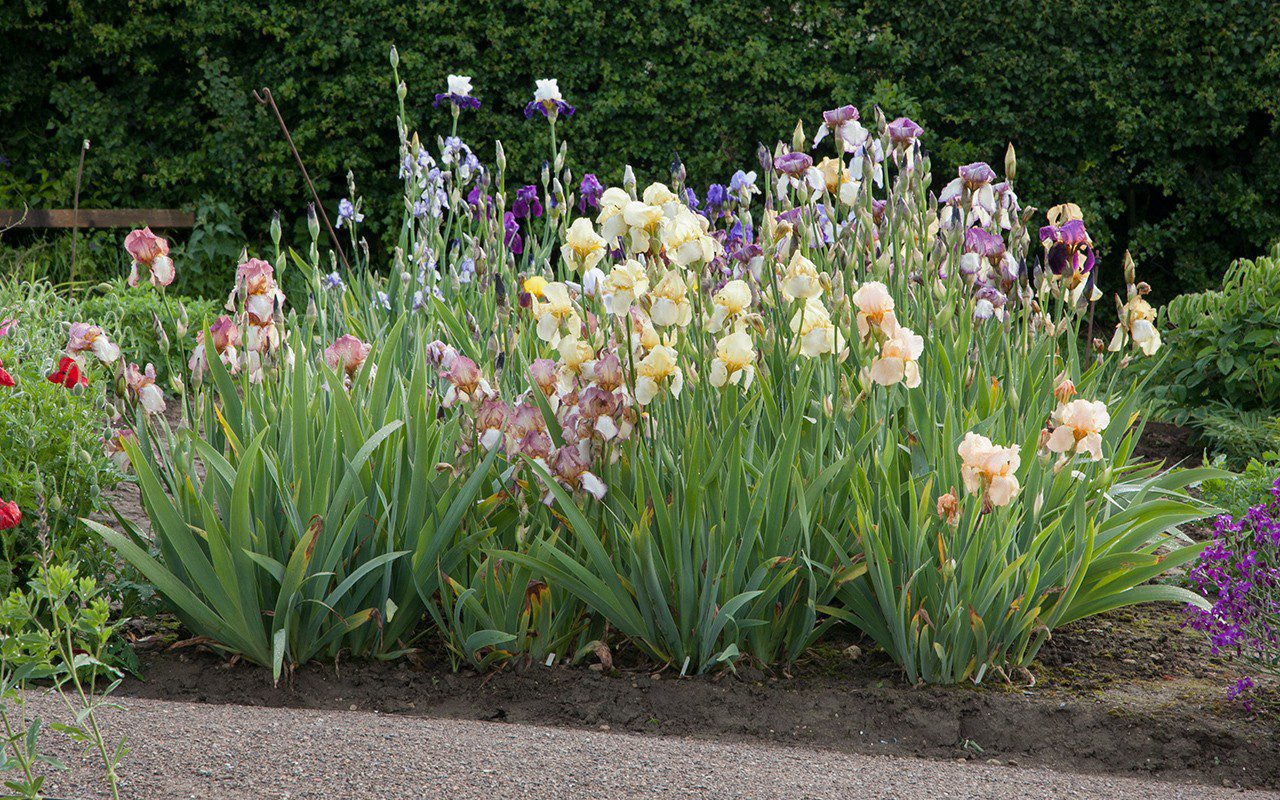 The Benton iris were bred by the artist and plantsman Cedric Morris at his home Benton End in Suffolk. Between 1934 and 1960 he raised thousands of bearded iris from seed, selecting some of the first pink, peach and yellow varieties that were widely acclaimed at The Chelsea Flower Show.  Regularly growing as many as a thousand seedlings a year he named around 90 varieties, the greater majority of which have been lost to time as they went out of fashion or were left behind and then, as gardens changed hands, overwhelmed or their provenance forgotten. As timing would have it, Sarah Cook, the previous head gardener at Sissinghurst, had also fallen under their spell and had made it her mission to pull the lost collection together. She teamed up with Howards Nurseries and together they mounted one of the best stands in the Great Pavilion at the 2015 Chelsea Flower Show. Thanks to Sarah and her tireless hunt and research, twenty five or so are now available again and her quest to find still more is ongoing. 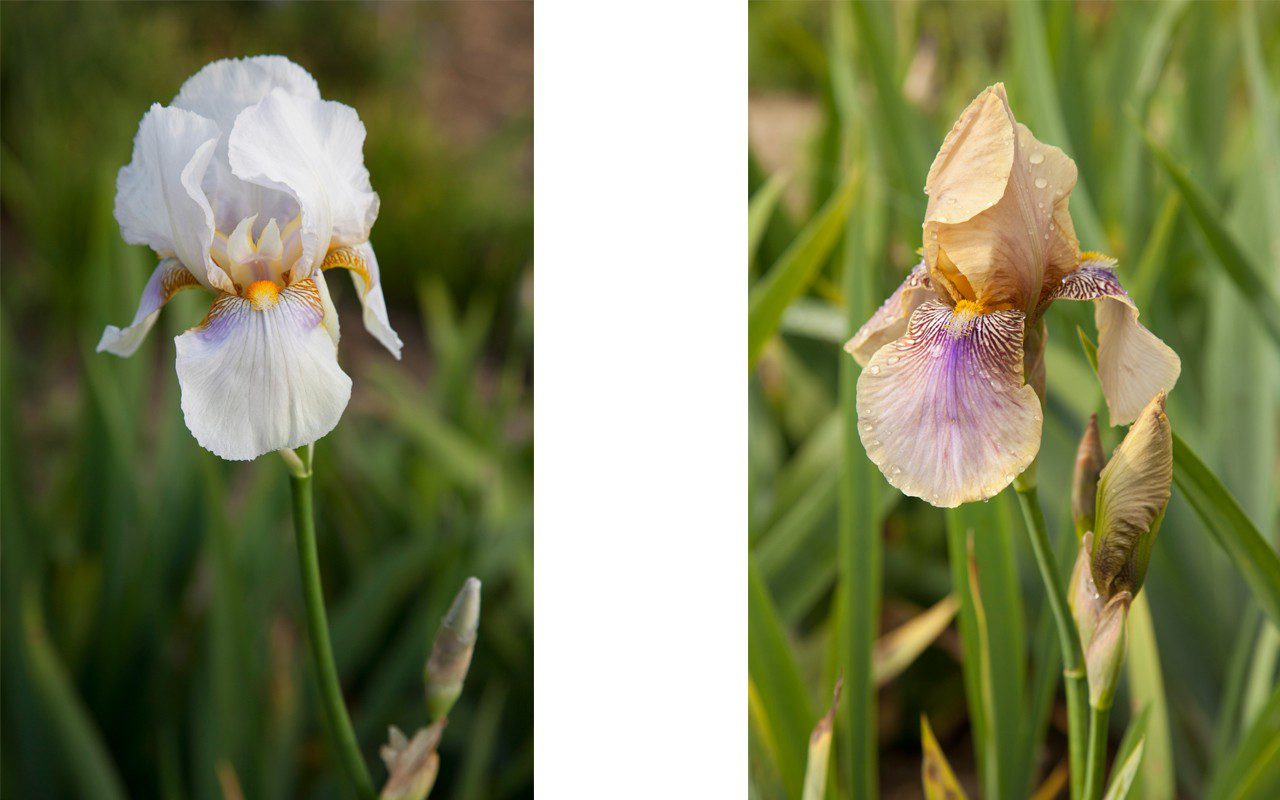 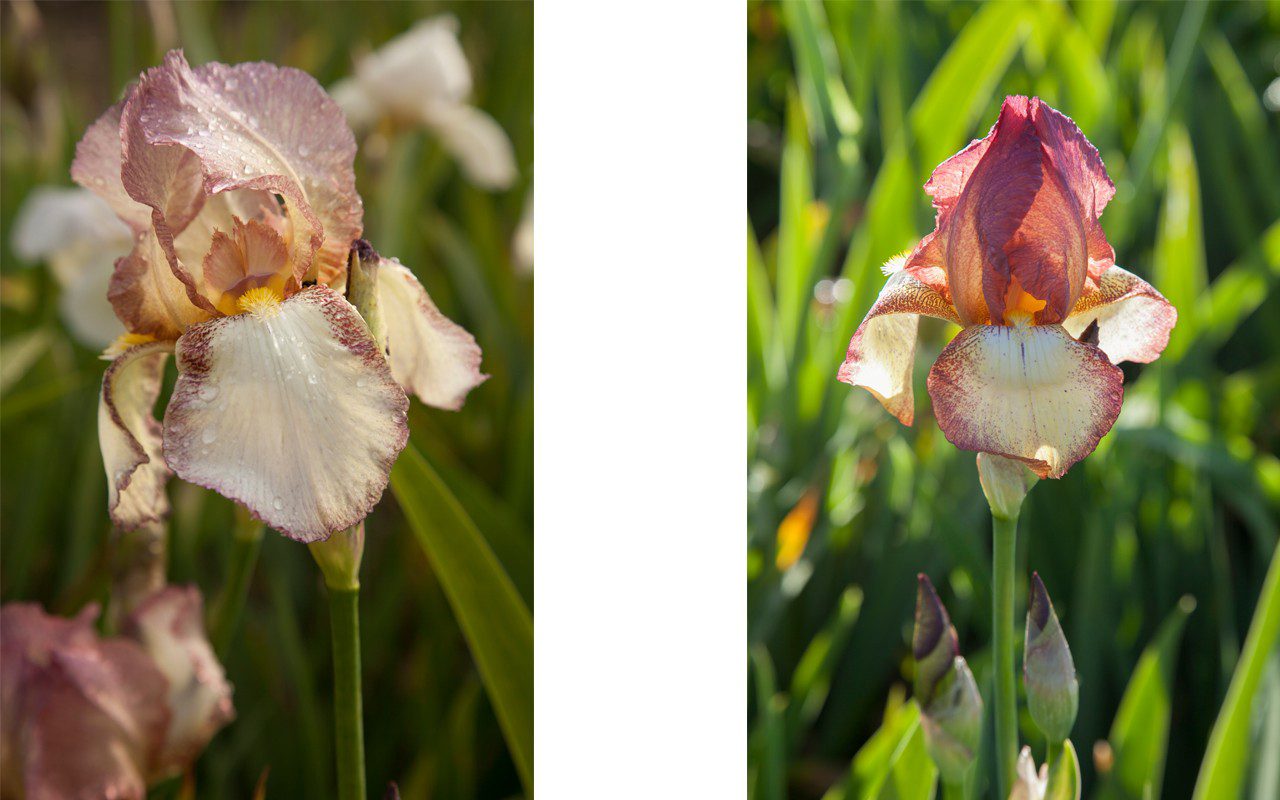 I would love to have met Morris, for he obviously had an incredible eye and nose for a flower with poise, grace and perfect balance, despite its complexity. Thanks to his eye, I have now been able to strip the trial back to my true favourites, which include 20 of his selections and just a handful of others that feel right alongside them; chestnut brown ‘Kent Pride’ was bred in the ’50’s and has the same period feel, while the straw yellow ‘Glen Ellen’ is as graceful in form and unusual in its colouring. The only blues I have kept are pale and refined; the small-flowered picotee, ‘Madame Chereau’ and the ice-blue and white ‘Nassak’. Of the purples ‘Demi-deuil’ almost looks like a species iris with small, dark-veined flowers, while the truly almost-black ‘Anvil of Darkness’ was always a keeper, because to my eye no other iris has such depth of colour combined with such a light and refined flower form. 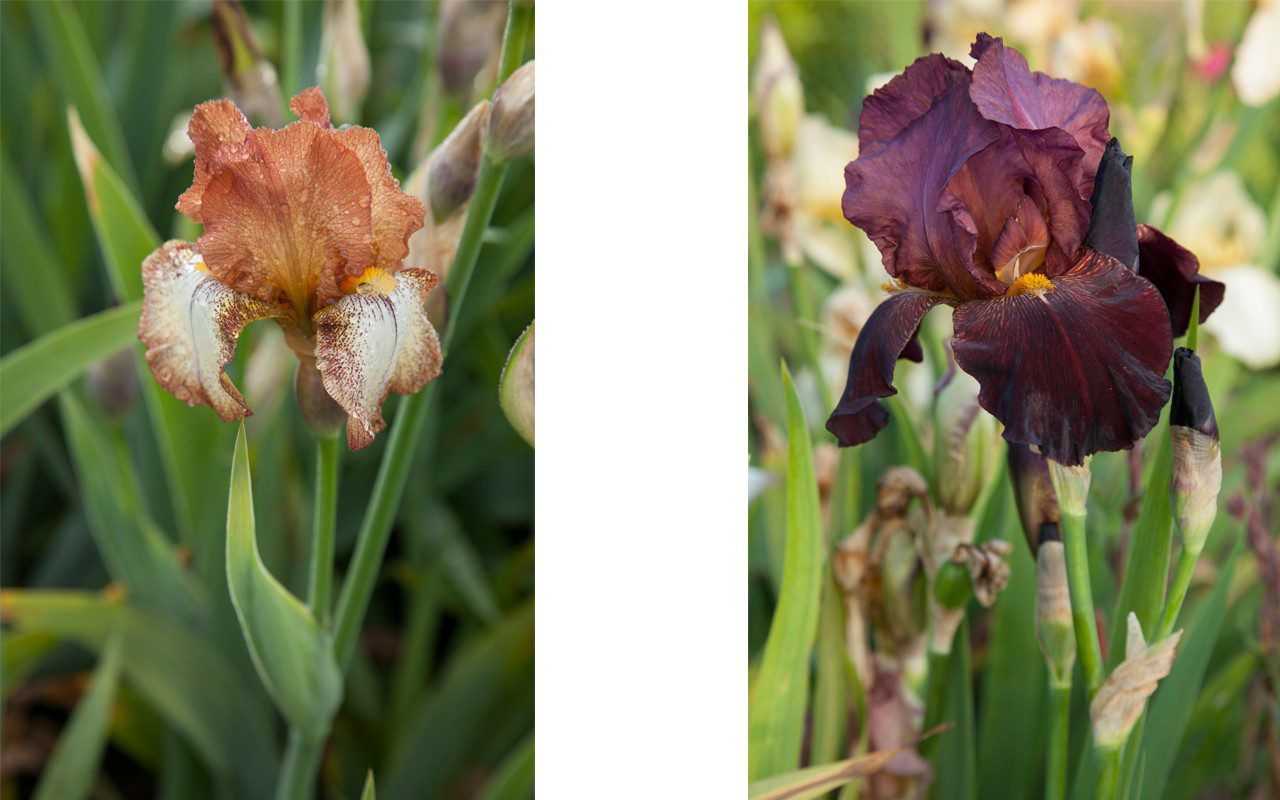 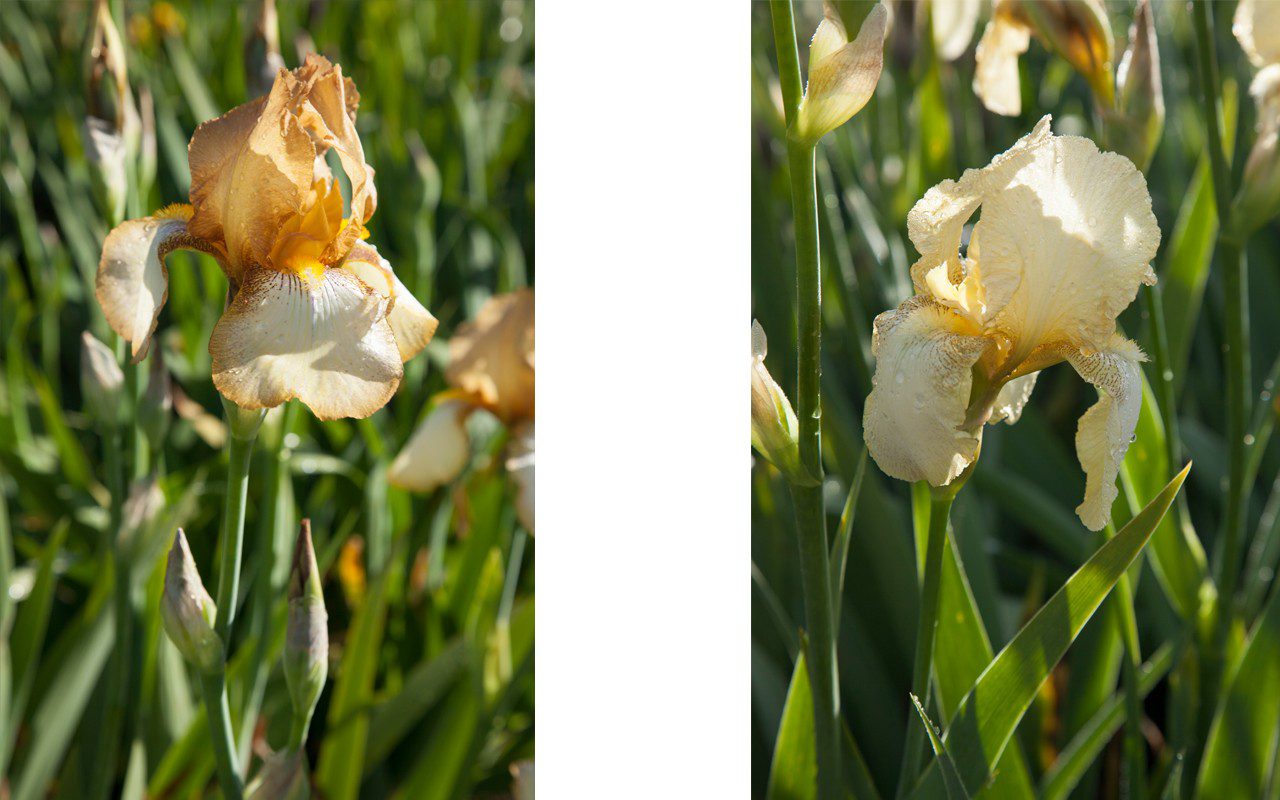 The Bentons have their own particular beauty which is hard to put your finger on, but you know it when you see it. With more elongated flowers and space between the falls they have an ethereal, stately quality. There is a bruised, sophisticated complexity of colour, which conjures another period and you can see is the result of an artist’s eye; picotees in shades of plum, mauve and pink, silver grey, mother-of-pearl white, primrose yellow, true apricot, rich chocolate brown and papal purple. You completely trust in Morris’s eye when you see them and his choices were so particular that you can almost feel what it might have been like to know the man himself. 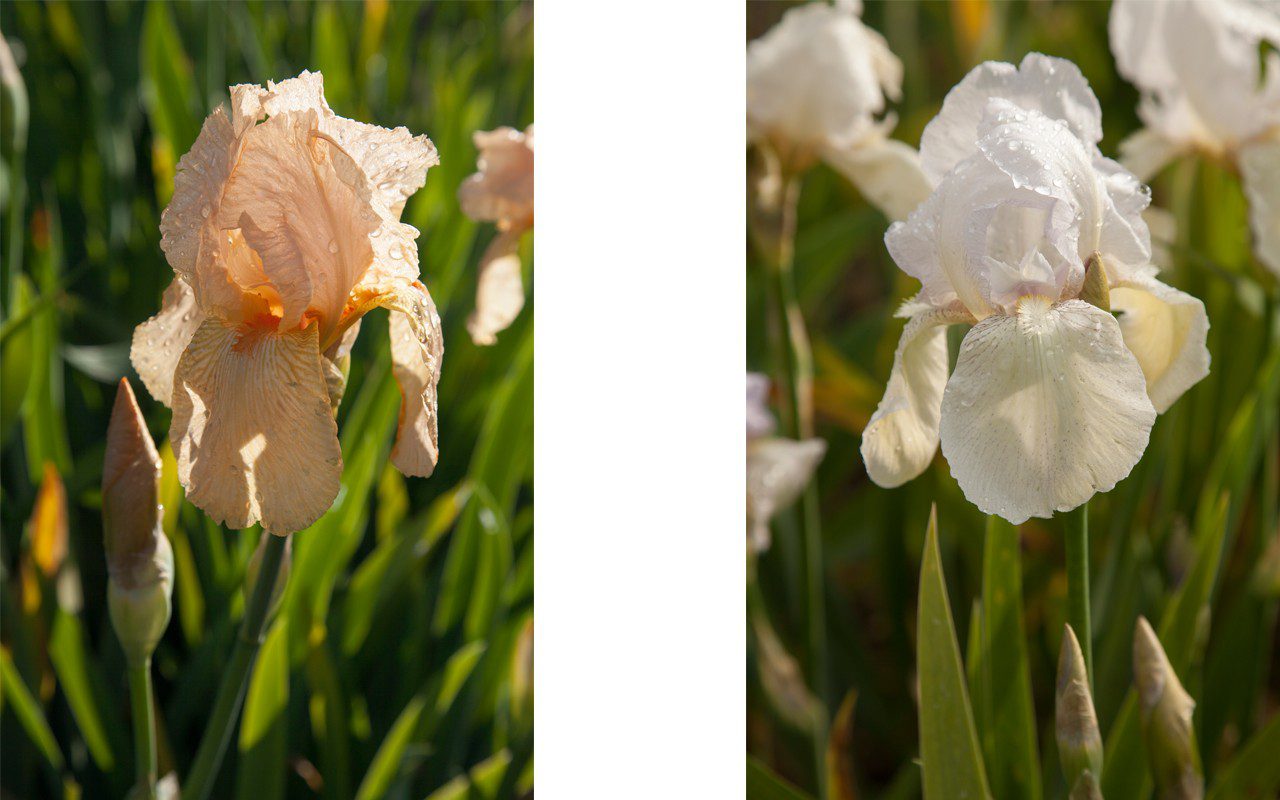 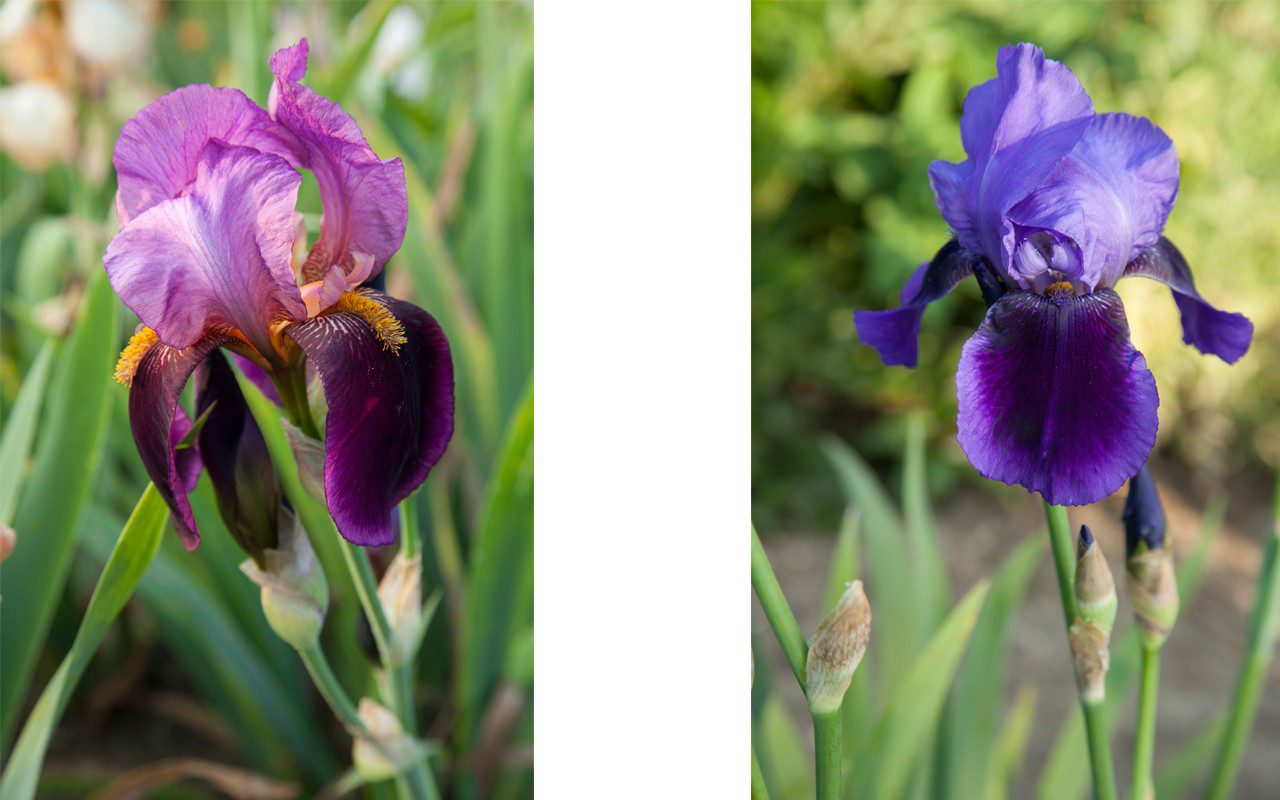 I have been planning for this moment for several years, as the trial garden is now in the process of being liberated to make way for the remainder of the new garden. I have deliberately not included the bearded iris in the new plantings, partly because they are very hard to use in combination, needing full sun at the base and no competition, plus they are altogether too captivating and attention-grabbing when they are in flower in June. The chosen few have been found a special place against the hot wall behind the herb garden, where they can have all the attention they want. All being well, they will thrive there with the radiated heat from the blockwork and I plan for there to be no companions for this is the way that the germanica iris usually fail, as they are lost to competition. 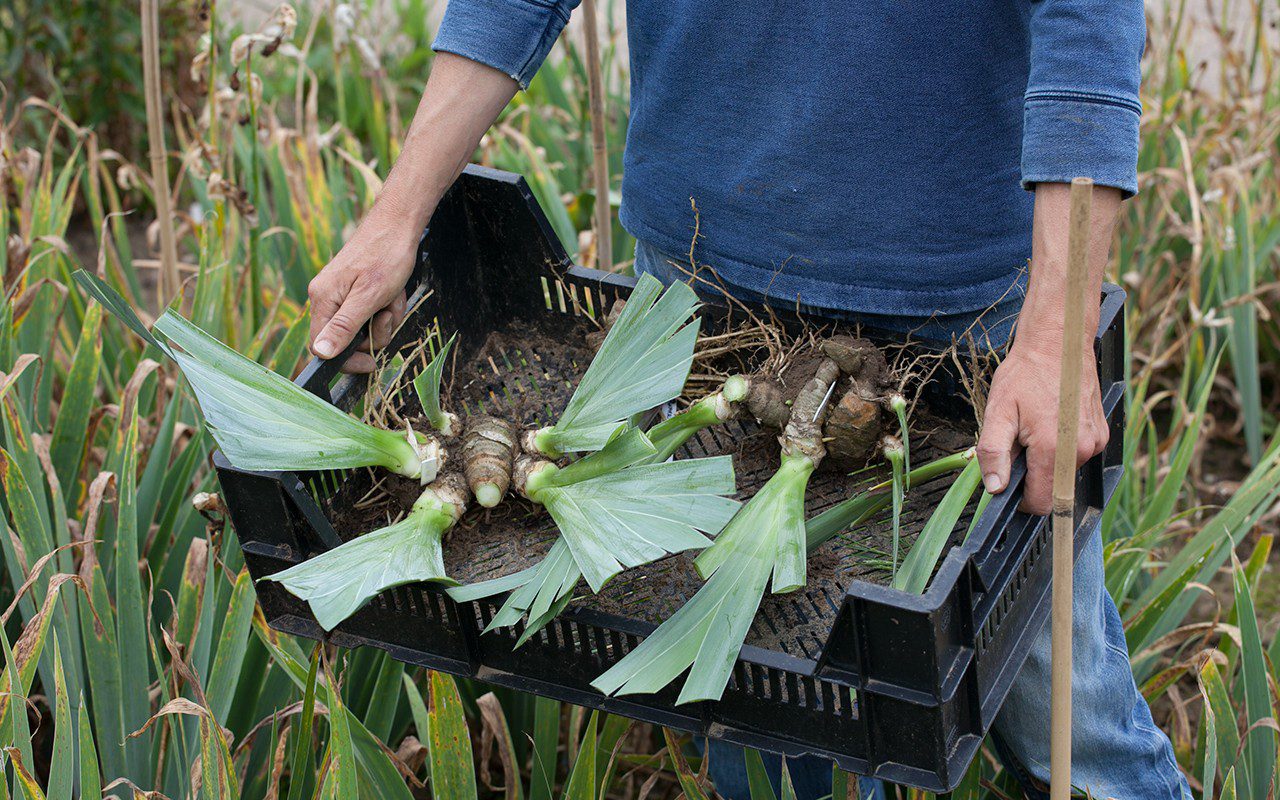 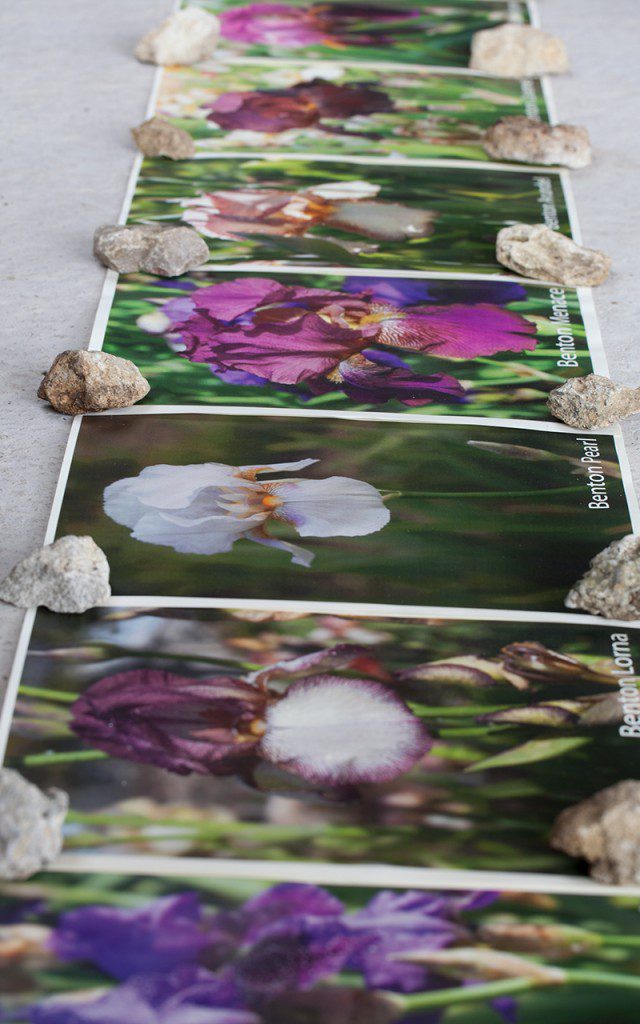 I lifted them in early July, as soon as they started to show signs of going into their period of summer dormancy. Splits were separated from the main clump with a carefully aimed border fork separating a healthy rhizome, with two fans of foliage and the energy in it to make good growth as soon as they start back into life later in the summer. The leaves were cut back into a fan in text-book fashion to reduce transpiration and to clean up any diseased foliage. The Bentons are well known for their health, but all the germanicas go into their scruffiest period in the middle of summer and the clean up feels good. The plants were replanted, the rhizomes facing south with the fan of foliage behind, like holidaymakers sunning themselves in deckchairs, to harvest all the light there is going. Our ground being damp in winter, I drew the limestone chippings from the path around their collars to help with free drainage and give them the best start at the beginning of this new and refined chapter.