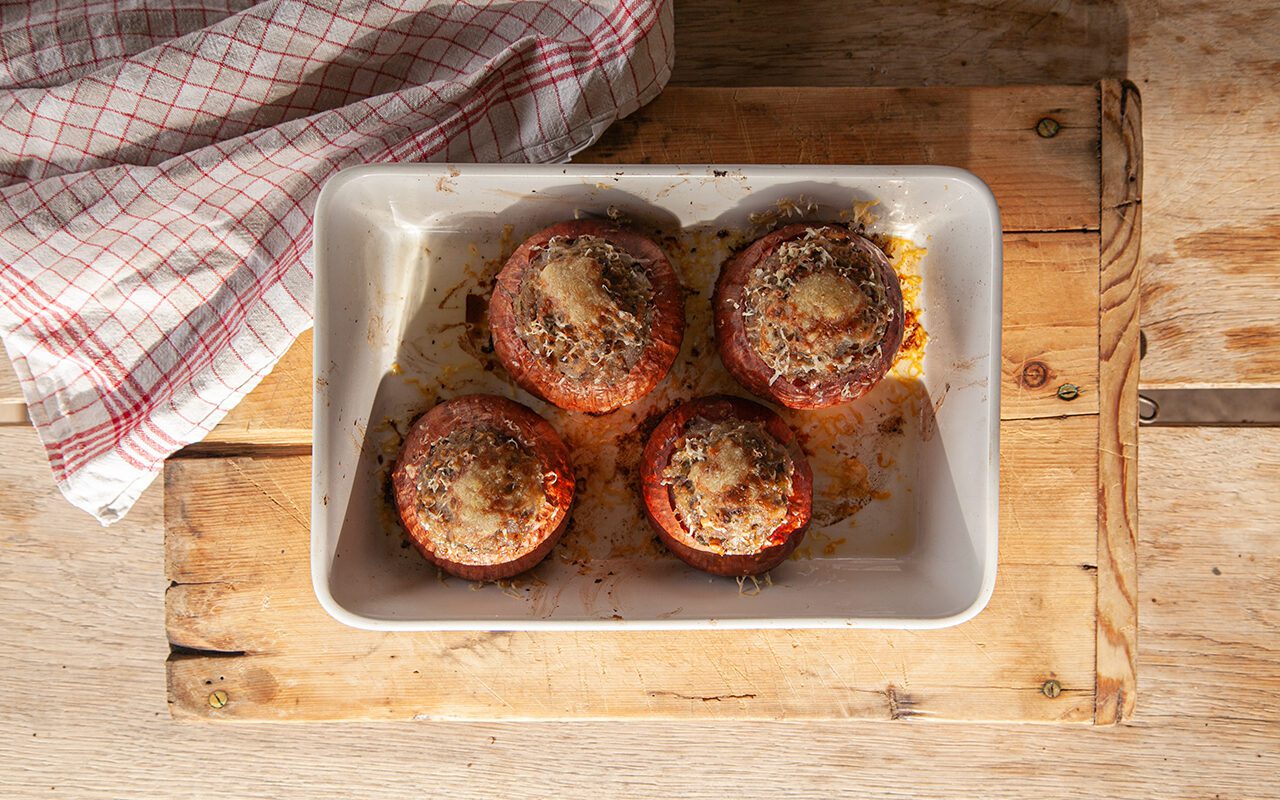 Almost without fail, every meal I cook begins with an onion. Despite the fact that I use so many and that they are both cheap and plentiful at the greengrocer, every year we grow our own. They are a straightforward crop, needing very little attention after planting, apart from weeding, and they always produce in bulk and without pests or problems. Given the frequency with which I use them, every meal time provides a sense of satisfaction and proof of a successful growing season.

We grow a number of onion and shallot varieties, and have settled on our favourites over the years; ‘Sturon’, a large white onion for everyday cooking, which has an RHS Award of Garden Merit due to its reliability and storage quality, ‘Red Baron’, a red onion, also with an RHS AGM, which is another good keeper and with a stronger flavour than most red onions and ‘Keravel Pink’, also known as ‘Rose de Roscoff’, a pretty pale pink onion with coppery skin, which is said to have the best flavour of all, sweet enough to eat raw and deliciously fruity when cooked. An old variety from Brittany this is the variety that my mother remembered beret-wearing Frenchmen – Onion Johnnies – selling from their bicycles on the streets when she was a child in Wales.

Over the years we have learned that onions do best in the sunniest beds of the kitchen garden, unshaded by other crops, do not like growing in beds that have been recently manured, benefit from heavy watering as they approach maturity and that, contrary to traditional growing advice to bend the tops over when the bulbs are fully grown and before lifting, that this is not good practice in reality, since it damages the base of the leaf shaft, which results in the bulbs being more susceptible to rot.

We grew only one variety of shallot this year, ‘Longor’, a large, yellow banana type shallot, which produces reliably high yields. We usually also grow ‘Red Sun’, but these had sold out last year before we could place our orders. All of our onions and shallots come from The Organic Gardening Catalogue as sets – small onions ready to be planted out in spring for a midsummer harvest – but I am tempted this year to try growing some from seed, as this is a lot cheaper and reportedly very easy. Unlike onions shallot sets can b e planted in autumn to produce an earlier crop, and I have recently received an order of ‘Échalote Grise’, an old variety, the gourmet French shallot also known as the ‘true shallot’, which I will plant before teh end of November. Every year we harvest around 100 mature, large onions and 10kg of shallots which, after they have been left out in the sun to ripen and dry out, are plaited together by Dan who is a dab hand, having done it for many years as a child with his mother.

Although the majority of our onions end up invisibly in soups, stews, casseroles, dhals and curries, sometimes you really want to taste the flavour of a home-grown onion, and this recipe makes them the focus of a meal. Many stuffed onion recipes have a lot of ingredients which compete with the subtle sweetness of the vegetable itself. Here onions’ well-known partner, sage, and just a little bread, nut and cheese ensure that the onion is what you really taste.

Set the oven to 180°C and bring a large pan of water to the boil.

Remove any loose papery skins from the onions, retaining one complete layer of dried skin. Remove the root with a sharp knife being careful not to cut through the skin, then cut through the top of the onion to remove about 1cm, so that you all of the layers are visible.

Simmer the onions in the pan of hot water with a lid on for about 30 minutes until soft to the point of a knife. Remove with a slotted spoon and allow to drain and cool in a colander.

When cool enough to handle carefully remove the centre of each onion with a teaspoon, leaving a shell 2 to 3 layers thick. Put the onion shells into a buttered ovenproof dish.

Toast the walnuts in the oven for about 3 minutes until lightly coloured and fragrant. Chop finely.

Remove from the heat and add the chopped walnuts, sage, the grated cheddar cheese and breadcrumbs. Season generously with salt, black pepper and grated nutmeg. Stir well and then spoon the mixture into the onion shells. Press the stuffing down well so that there are no air pockets and mound it up on the top so as to use all of the mixture.

Grate a little more cheese over the top of each onion and then put into the oven for 30-40 minutes until brown and bubbling.

Serve as a main course with a green salad and boiled potatoes or as a side vegetable with other dishes.

These can be made in advance and then, before roasting, kept covered in the fridge for up to three days until needed or wrapped in foil and frozen. Once defrosted you should add 10 to 15 minutes to the cooking time from cold.