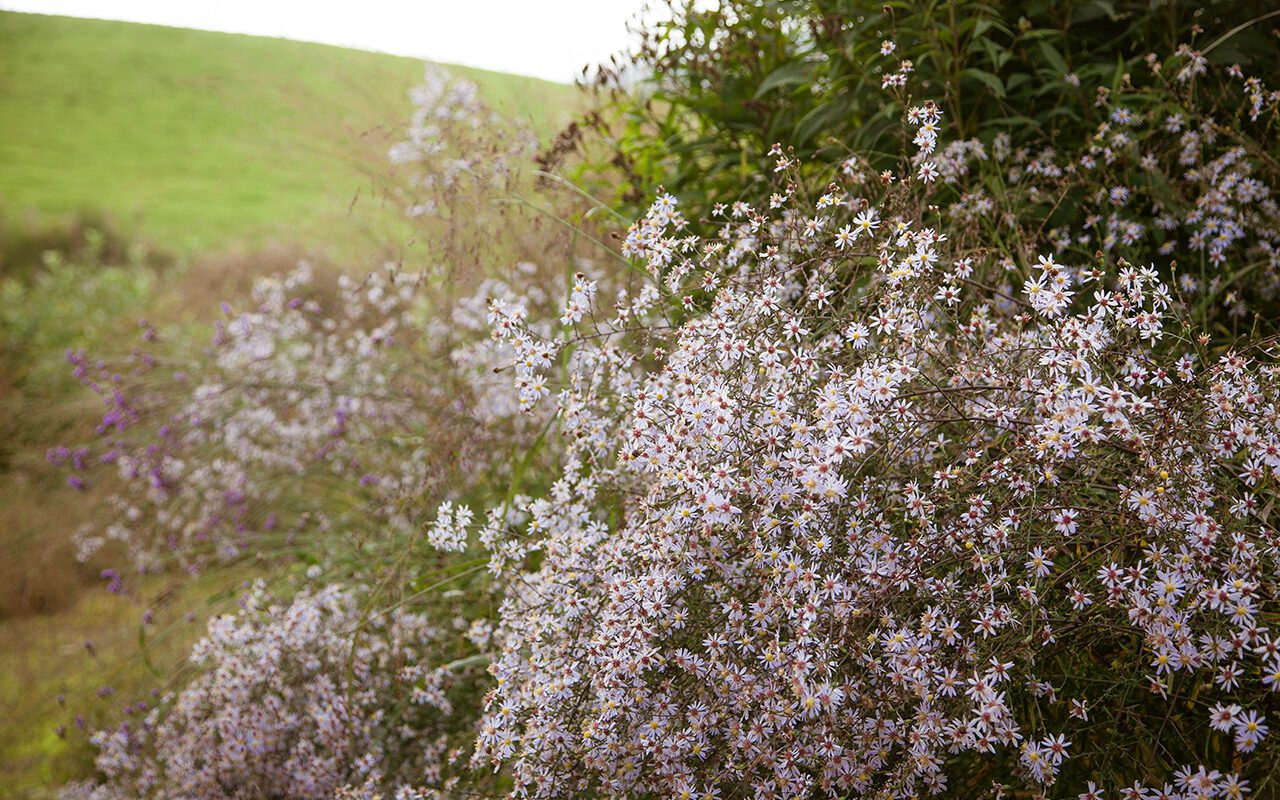 A chill is in the air. Mist in the valley. The wood tawny and bronzing. This is one of the most beautiful moments in the garden, standing still and voluminous, but beginning the decline. A decline suggests something lost, but the turn from the growing season is anything but. Colour in the grasses, the tail ends of the Verbena ‘Lavender Spires’ smattering violet.

Running in an undercurrent much like the cool air that sits in the hollows, the asters claim this moment. Softly spoken as flowers but enduring, they have been mustering quietly. The feeling of potential they provide is valuable as the summer plants fade around them in August, a month that often feels suspended between two seasons. Energy yet to be spent is good then and this is when the first of the asters begin their relay, one handing over to the next until frost finally does for them in November.

I made a trial of asters before making the garden here, testing a couple of dozen varieties to find the ones that felt ‘wild’ enough in the planting. I was looking for forms that were light on their feet, with air in the sprays and not too heavy with flower. It was also important that they were reliably clump-forming and without the tendency to run so prevalent in many, though I have been prepared to make the exception for Eurybia x herveyi ‘Twilight’. This is one of the earliest to flower here in late July and I always forget then the time I have to spend in March keeping them within bounds. I am probably going to move them to a corner where they can have a space amongst other plants that can deal with their wandering habits. Somewhere that feels akin to their home in Eastern North America, on the edge of woodland and reaching through grasses and scrub towards the light.

Symphyotrichum ‘Photograph’ was moved back into the garden last year from the stock beds, where I had kept the best of those from the original trial not used in the garden to further get to know them. A stock bed is a wonderful luxury. It is a practical place where one of each plant sits cheek by jowl with an unlikely neighbour and can be observed more closely than in the mind’s eye. It was this time last year when we felt we needed a lift amongst the Molinia ‘Transparent’ in the lower part of the garden. We picked a number of sprays from the stock plant and set them there to see how they felt. Then four canes were pushed into the beds with a label to remind me on the other side of winter what they were for. In March, after the garden was cleared, the original stock plant was split into four in text-book fashion with two forks placed back to back and levered apart to quarter the clump.

Symphyotrichum cordifolium, the Heartleaf Aster or Common Blue Wood Aster, is the parent of several good plants; ‘Chieftain’, ‘Little Carlow’ and ‘Primrose Path’ to name three in my original trial. The first two were rejected because they were too dense in flower and too showy.  ‘Primrose Path’, which is lighter in feeling, made it briefly into the garden, until the fact that it was a seeder looked like it might become a problem.

‘Photograph’, a 1920’s S. cordifolium hybrid raised by Ernest Ballard, is tall at 1.2 m and needs a little staking if you do not have the room to let it sprawl. A Chelsea Chop in mid-May to reduce it to knee height encourages branching and curbs the tendency to lean. We have found it the room is has been waiting for, the benefit of patience and observation allowing it the opportunity to light up the molinia at this tail end of the season. Arching with the sweep of the grasses, the constellations of just-violet flower are alive with pollinators and capture the low October light to illuminate a garden that is on the wane. Falling away yes, but far from yet spent.

Post Script:
Asters, lamentably, have been reclassified and renamed in recent years. Retain the original name in your mind and forgive the awkwardness of the new names – Symphyotrichum, Eurybia, Doellingeria – which capture (to the non-botanist’s mind) nothing of the magic and rightness of Aster, which means ‘star’.