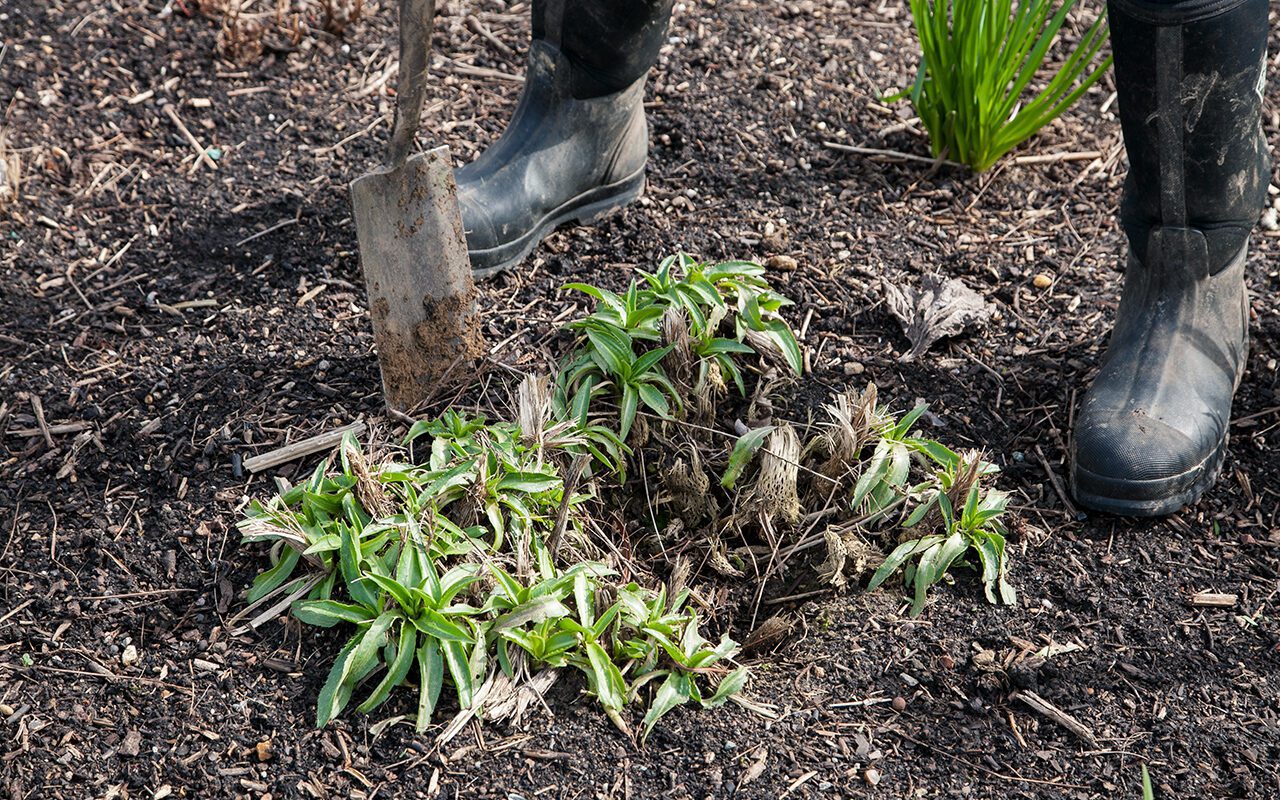 The great cut back this year happened over three weekends, starting at the end of February as soon as I saw new life, and finishing with time to assess the garden before mulching. It is a very good feeling when you finally decide to let go of what came before and embrace the change. A time you have been waiting and planning for and one that, this year, feels particularly good to embrace with the uncertainties that lie ahead of us.

The growth feels early now after the mild winter and, by the time we cleared the last bed, many of the perennials had already pushed into last year’s growth. Some, like the baptisia were a dream to pull away. New shoots in a perfect arrangement of expectation, the colour of red cabbage, the old stems toppled and splayed and waiting to be lifted. The sense of urgency was expressed in the delicate lime green of fresh hemerocallis foliage, which I wished I’d cleared around earlier but, standing back at the end of the day and with the volume of last year gone, it was good to see the established rosettes, each with their own character and story to tell so clearly mapping their territories. The new ruby foliage of peonies marching along the path, and the bright buzz cut of the deschampsia already re-growing from their shearing. Yet to emerge, the late season panicum are making it very clear that they are lying in wait and it is only at this time of year that you are able to make these observations. Put them on the wrong side of an early to rise sanguisorba and they will be thrown into shadow and not make it off the starting blocks.

The window between cut back and mulching is a good time to look and I like to take a day or maybe two combing the garden to see where actions might be needed. The long-lived clump formers like the peonies and baptisia will go years before they need any attention. All I have to do there is give them their domain and restrict an unruly, faster-growing neighbour. Stooped and looking close to retrace the ground-map of rosettes, I make mental notes of what needs doing now and what can wait for another year. When all is laid bare is when you see the life cycles, when the runners give away their secret behaviours and the clumpers either make you feel at ease, because they do not yet need division and have life in them yet.

Those that will dwindle in the coming year and need re-vitalising exhibit this with a monkish bald patch in the middle of the plant where the new growth is moving towards fresh ground. I have deliberately steered away from perennials that live on a short cycle and have taken time, for instance, to choose asters that are clump-forming and need division less regularly than those that run or burn out fast if they don’t. But there are favourites that do take a little more time. When I put aside a whole morning to carefully retrace the runners from the Pennisetum macrourum I think about the Hemerocallis altissima that won’t need my attention. With plants you haven’t grown before or don’t know as well, you need to build in this time to become familiar with their habits and weigh up whether something is going to become an problem. The pennisetum comes close to being problematic but, when it captures the wind in its limbs in midsummer, the balance is fairly tipped.

Singling out the bald patches has not taken much time for there are just a few plants that are showing their age in this young garden. As it ages I expect there will be more and I will need to pace myself and anticipate action before it is needed, singling out a few plants each year that look like they need refreshing and doing so before the season is upon me. This year the perennial Angelica anomala and the hearty Cirsium canum have both required splitting. They have been fast to make an impression in the new garden, but are doing so at the expense of reliable longevity. I do not begrudge this quick turn-around, for their presence in the planting is strong and certain. In its early awakening I can see that the dark limbed angelica has moved away from the original crown with small offsets offering me plenty of material to pot up and grow on for the autumn. The most robust sections, with good roots, storage rhizomes and potential have been replaced in the same position with the ground regenerated gently by forking in compost.

The cirsium were divided into three, the best part replanted in improved ground and the remainder discarded. This is hard to do, but it is a gentle giant and there is only room for a small number. Standing seven feet tall, glossy and without prickles but looking like it should, it is a plant with attitude which, like the pennisetum and the angelica, make up for needing a little more attention than the crowd.