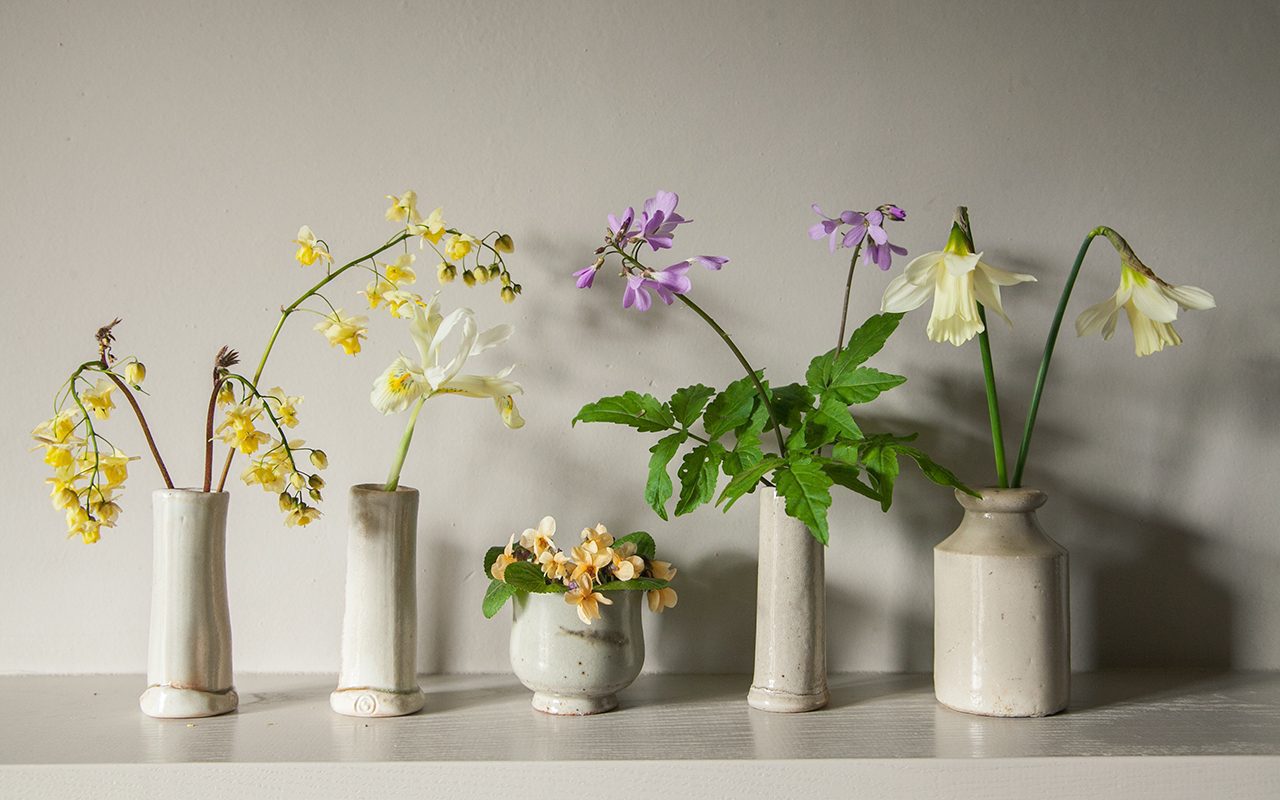 Finally, it seems, it is officially spring and we hope to move on from dodging the storms at last. Sailing through unscathed since they first showed colour in early January, the Cardamine quinquefolia is a plant that I would like much more of.  It has taken a while to establish, but now it has the shade cover it likes, it is moving amongst the hellebores and the lavender-blue Iris lazica. An early woodland ephemeral, this cardamine has come and gone by the time the trees leaf up in May. It is a plant that takes all your attention for being so willing when most other things are dormant and it is good company for going into dormancy when they come to life. For this reason, it is worth making a note of where you need more of it and then moving it as soon as it breaks ground in January if you are not to miss the moment. It has fine surface roots like wood anemone, so I find it best to lift a square sod once the clumps are large enough to divide with a border spade.

This is the first year I have cut back the Epimedium sulphureum, shearing the foliage as soon as I saw flower buds in the crowns in mid-January. ‘Best practice’ dictates this is the most effective way to appreciate the coppery, new growth and emerging flowers, but leaving this easy epimedium for the past few winters has created a wonderful micro-climate whilst I’ve been establishing the hellebores. I have them pooled in its pillowy foliage so that their leaves are protected from the easterlies, but the flowers can rise above them.

Shearing last year’s growth in January felt bold, but the delicate flowers are now dancing in the breeze and quite capable of dealing with a storm. They are as delicate as fairies, despite being tough enough to deal with those difficult places between shrubs and beneath trees. It holds the slope behind the tool shed where there is shadow, but it is just as happy in open ground as long as it retains moisture. This would not be the case at all for its Asian relatives, but this reliable European epimedium is made for easy gardening.

Out of necessity I have been experimenting with planting woodlanders in sunshine on our exposed hillside. As long as they have the canopy of later-to-emerge perennials, the primroses actively seem to prefer spring sun. The same can be said of spring violets, which I am planting wherever there seems to be a suitable niche close to the paths. I first saw the unusual, soft apricot Viola odorata ‘Sulphurea’ a few years ago in the nuttery at Sissinghust, when I was visiting Troy Scott-Smith. He promised me a division but, as is the way, spring happened and the business surrounding it meant that it was autumn before Troy re-visited the spot to follow through on the offer. By then the violets seemed to have moved on so, smitten, I ordered seed from Chiltern Seeds and sowed it ahead of winter. Being another mild year and without the chill they need to germinate, they took two years to appear and then another one to flower, but now here they are. The wait seems suddenly nothing and I’m delighted to have them for myself. Though not as strongly perfumed as their purple cousins, I’ve also used them along path edges, combined with this creamy epimedium, so that not an inch of ground goes without cover.

I never fail to be delighted by Narcissus moschatus, which is possibly my favourite of all for its poise and delicacy. Closely related to our native N. pseudonarcissus, but only occurring naturally in the Pyrenees, it has taken a while to build up a nice colony, for the bulbs are hard to find.  I have it growing under a five year old sweet chestnut that was planted in memory of my Dad. Opening a pale yet sharp buttercream yellow, they soon fade to ivory white. Heads tilted downward (they are also known as the swan-necked narcissus) the flowers have an air of modesty and melancholy.

Though some plants are good to revisit every year (and in the case of the narcissus, I am never disappointed) it is the first time that we have grown Iris ‘Katharine’s Gold’. It is always nice to discover a potential new favourite, and is one of the reasons we trial some new varieties of bulbs every year. This is the last of this year’s reticulate iris to appear, a good three to four weeks later than the first ones that came in late January. Reputedly a sport of I. ‘Katharine Hodgkin’, we prefer it as it is taller and stands more elegantly with more air between the standards and falls. Pale yellow suits this moment too. One we hope can now be depended upon to get brighter.