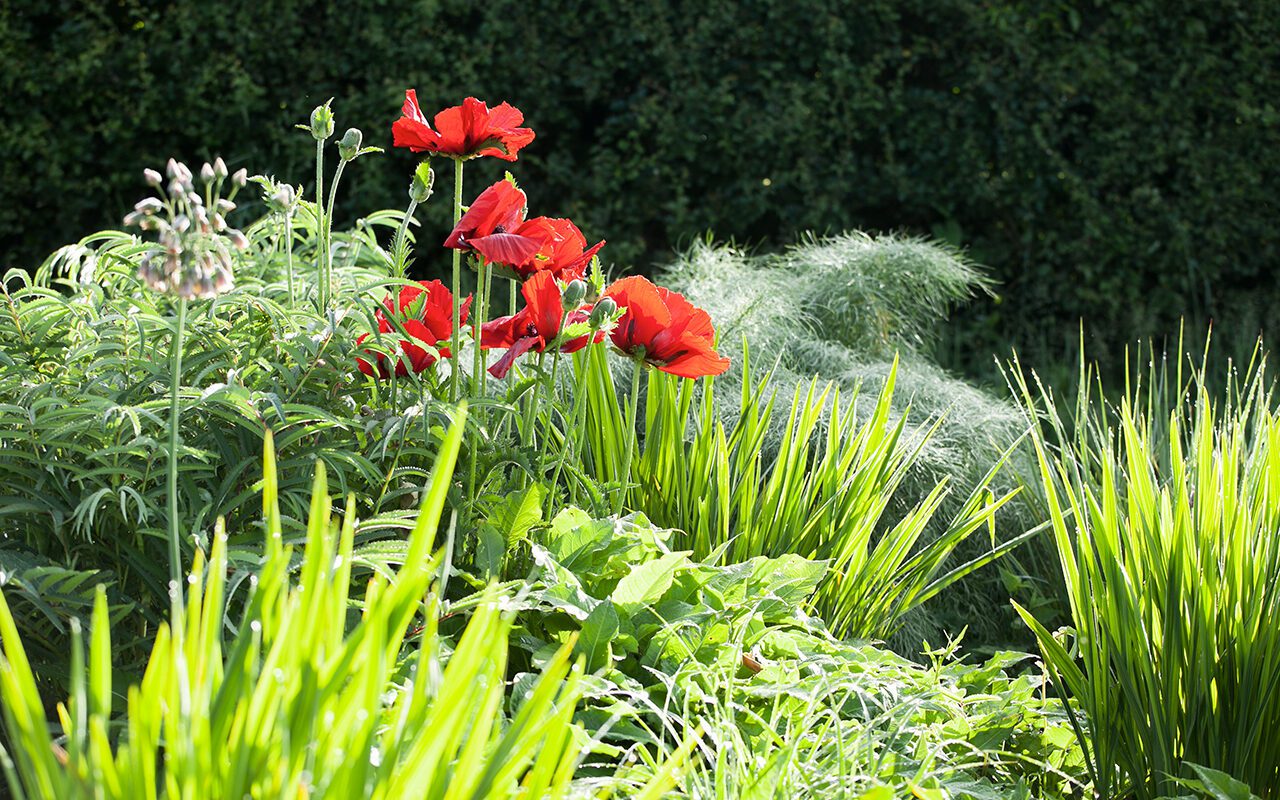 The oriental poppies have broken the green, rearing above the rush of June foliage. They are the first true colour in the garden, save the Tulipa sprengeri that teetered neatly on the last week of spring and preceeded them. Red is a jolt this early in our verdant landscape, but we are ready for it now, the first slash of summer.

I have planted the poppies in homage to several memories. The first, a plant I remember from being about the same height, gazing into their interiors in our childhood garden. It grew with ferns and sprawled beyond the borders to offer up bristly buds, the casing breaking into two under the pressure of soon to be uncrumpled flower. I am red-green colour blind, but not completely and those poppies are an early memory of being able to see red fully, for they present it without compromise. Luminous and as red as anything can be, heightened by black-blotched bases and turquoise stamens.

The second memory, and one that I have planted into this garden, refers not to poppies at all but to meeting scarlet Amenone pavonina flaring amongst euphorbia and the march of giant fennel on the Golan Heights in Israel. I was there for a year working in the Jerusalem Botanical Gardens and the brilliant Michael Avishai, then Director of the gardens, would take me on weekend excursions to look at the flora of Israel. A fearless and terrifying driver, we would leave at 4am, to arrive at a site, spot on time for a happening in the landscape. This one came with his advice to not stray too far from the road. If you stepped over the wire marked “Land mines. Do not enter !”… The red of anemone I can see too and I shall never forget its shimmer amongst its opposite acid greens and the sun rising over an army of fennel stretching into a dangerous distance.

So, this particular memory comes with a charge and the oriental poppies that step through the giant fennels in the garden here take the place of the anemone. We have two varieties by default, not design. The requested ‘Beauty of Livermere’ (Goliath Group) are pillar box red, while there are three plants of a tangerine orange one that were substituted and planted without knowledge of their difference. I do not have the heart nor the desire to take out one or the other. The reds are good together and if I were to try and remove the plants to only have one, they would still likely regrow from root cuttings. This is the way to propagate oriental poppies for they do not come true from seed.

The rush into life in the spring, first with a mound of hairy, lime-green foliage and then the reach to flower is made possible by energy stored in thick, deeply searching roots. Hailing from Central Asia, their habit of disappearing once they have flowered and set seed is a survival mechanism against the drought of summer. The gap they leave will need to be negotiated by cutting the plants back to the base as soon as they begin to wane and in combining them with later-to-come perennials that will cover for the gap they leave behind. Asters and late flowering grasses make good couplings.

The reserve in the root can also be used to advantage in the fringe of the garden in rough grass and amongst cow parsley for the early growth will also outcompete grass in spring. The secret is to introduce them as established plants and keep them clear of competition in the first year whilst they are building their root system. Their dwindling summer growth will be disguised by the meadow and the autumn regrowth can be mowed around once it returns with summer rains.

Though I do not grow more varieties here, for the oriental poppies set an opulent tone and demand your attention whilst they are in flower, I have grown several in the past. At Home Farm I set ‘Perry’s White’, with its contrasting dark blotch, amongst gallica roses and inky bearded iris. I used the wood aster, Eurybia diviricata to cover for them later. For a while I also grew ‘Patty’s Plum’ for its thunderous bruised grey-mauve flower though it was never a keeper and dwindled for me. Then there was Saffron’, with wide open flowers of pale tangerine.

Burned into the June green, I will be there as I was aged five this coming weekend to witness their awakening. Never dimmed, always welcome.