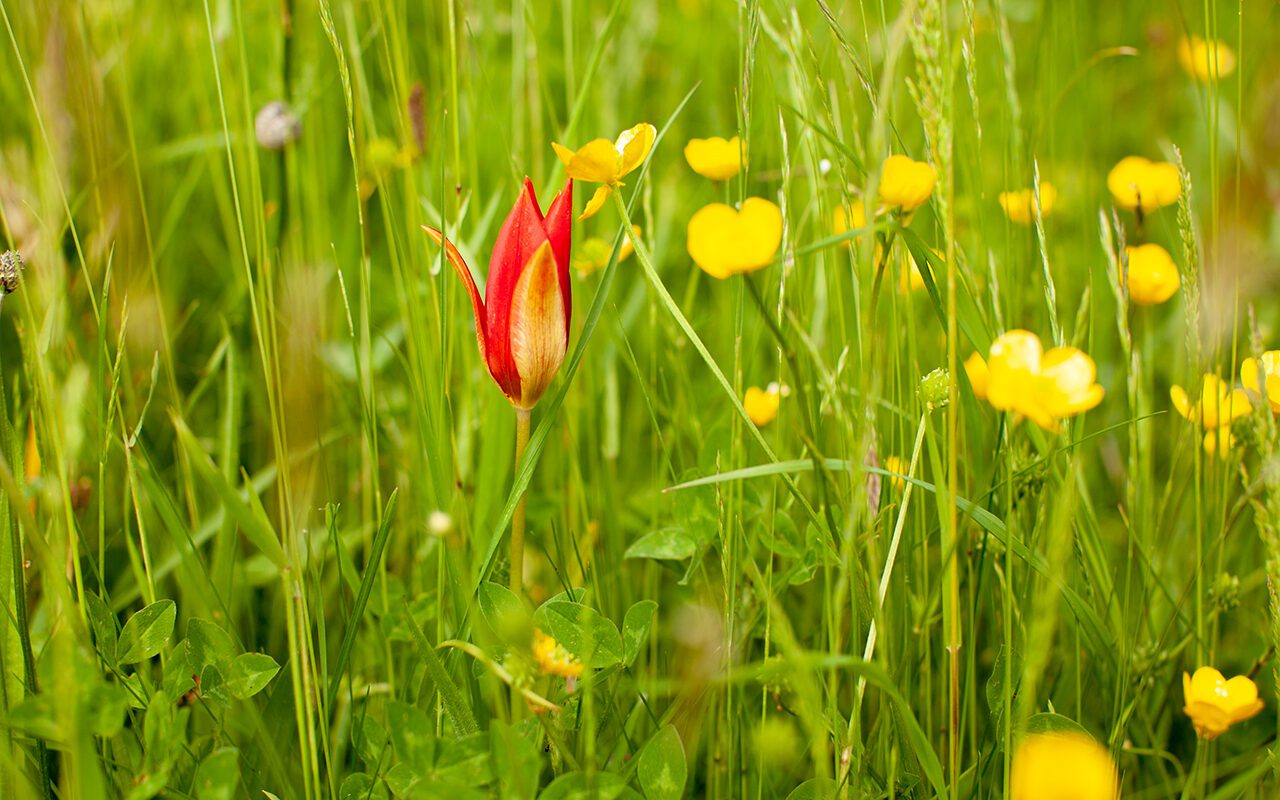 The farmers around us are making the first haylage, harvesting this moment of energy in the pasture before the grasses race to seed. Meanwhile, we let our meadows grow and watch the energy change on a daily basis with the mown paths deepening as the growth pushes into June.

After the slow, cold spring and now the rush with the weather warmed, we find ourselves feeling as if the world around us is in fast forward. So full of life and never lusher.

The Paeonia peregrina holding on with its perfectly spherical buds, glistening and burnished whilst it was cold still in May, were the perfect example this year. Despite the slow spring, the anticipation in their readying was as good as the moment they opened when the weather warmed earlier this week, the richly coloured goblets acting as sound boxes as the bees busied themselves inside. Pollinated and the business done, they were gone and on to the next part of their life cycle. Such is the way in these early summer days. You have to concentrate and make the time to look or you will have missed the moment.

The ephemerality of many of the plants that see in summer is made more acute for the rush. The first field poppies and evening primrose, each flower lasting just for a day. The creamy hawthorn or the flash of scarlet Tulipa sprengeri (main image). You have to put aside time to be with them as they move from one stage to the next. Miss a day and you will do as I did just last night and return to find the vivid tulips already dropped, their scarlet just a memory.

We try right now to spend time walking the meadows daily. The garden is deliberately planted to be slow whilst they are in their prime and to come into its own once they dim and lose their lustre. The daily visits out into the landscape chart the happenings. The week of the dandelion, the pause and then their clocks two weeks later, seeding and silvery as the first of the buttercups rise and put the sway into the meadow as it lifts and reaches skywards.

The dynamic nature of the meadows is what makes them captivating and our walks are slow as we follow one colony of plants or stumble upon the first orchids or the dainty, day-flowering Pale Flax, which has moved its place from the previous year. One year is different from the next as the balance addresses itself to the weather or the grazing or a window of opportunity as one species ebbs or migrates.

Right now it is the time of the mauve-grey Tragopogon porrifolius, which I introduced to the meadows to see if it would find a niche. Blinking open in morning sunshine and closing in the afternoon, the flowers also last just a short time, but they relay over three weeks or more with one flower rising from the grassy foliage to follow the next. Standing tall, a head or so above the crowd it will be the end of the month before their giant dandelion clocks are suddenly with us. Coppery and transparent and holding the light. The parachutes that help the seed travel will slowly further their reach as the seed itself is heavy. They are less invasive in a meadow than if you let them loose in the garden and they bridge the two and help blur the boundaries.

In these first few weeks of summer I often think that I will end up gardening in meadow one day rather than controlling to the degree I do in the garden. The pale Camassia leitchlinii ‘Alba’ is a nightmare seeder in a bed, but it is happy to find a niche in the meadow to follow on from Pheasant’s Eye Narccissus. The magenta Gladiolus communis subsp. byzantinus, which might steal the limelight in the green of an early summer garden, sit so comfortably in the shimmer of the first grasses. They accept the punch of this foreigner in the community and then eclipse them as they run to seed once the summer takes hold.