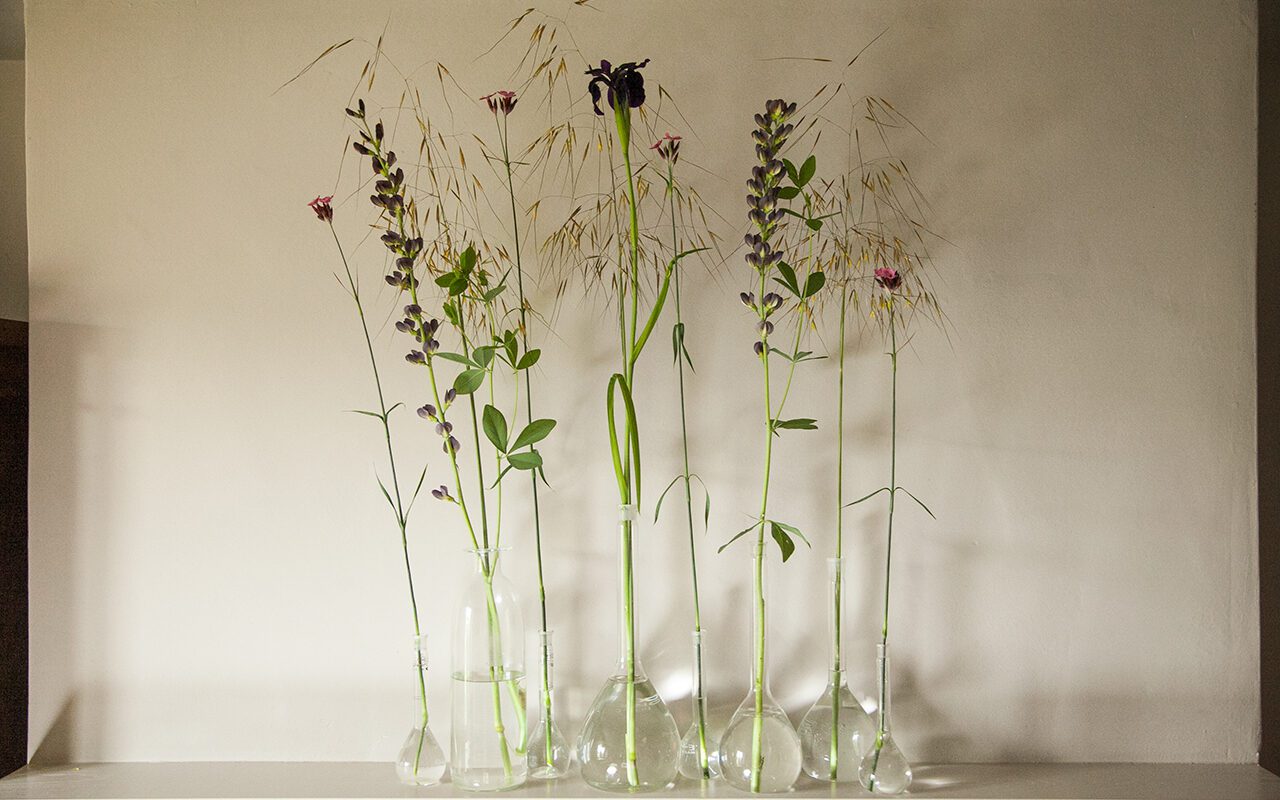 The Giant Oat Grass inhabits high, dry ground in southern Europe and, although I have never seen it in the wild, I can imagine them rising above their companions in the steppe. This is how they like to be, in the company of plants that do not overshadow the tussock of evergreen foliage and where in the longest days of the year they take the light and hold it in a hovering suspension of coppery awns.

The stipa is an old favourite. I grew it first and en masse as an early emergent in the Barn Garden at Home Farm. We used the pockets amongst the old cobbles where previous buildings had been razed to the ground and allowed the oat grass to lead the mood in June. I let the Californian poppy seed through a sprawl of Potentilla ‘Gibson’s Scarlet’ at its feet and the rusty spears of Digitalis ferruginea ascended up into the cloud to score the vertical. I have the Stipa here too, also by our barns and growing in nothing but rubble and subsoil where they stand head and shoulders above their companions. To play on the dilapidated mood of the rusty buildings they are teamed with evening primrose and the tiny pinpricks of a wild dianthus.

Spearing at speed from the basal foliage as the days lengthen, the stipa are a litmus in this race to the longest day. Angling up and out so that there is sufficient room for the flowers to take their own space when they break the tall tapers, they head into a miraculous fortnight of flower. The panicles open out at head height to form a cage through which the wind can easily pass. The golden moment is the week the anthers furnish themselves with pollen, dangling free and on tiny hinges for mobility and ease of distribution for wind-blown pollen.

Though it strikes a particular mood of dry airiness in the garden, Stipa gigantea goes with almost anything if you pick it and bring it inside for closer observation. We have it here with a couple of neighbours from the planting. A tall Dianthus giganteus from the Balkans, which favours the same conditions and seeds about in the open places. It has proven to be long-lived here where the ground drains freely and has seeded easily but not annoyingly amongst but not into the crowns of neighbouring plants. Rising to almost a metre here, it is an easy companion, content to find its place on the edge of the planting and rising through the stipa to provide an undercurrent of colour. With blood red calyces and magenta buds that deepen the mood, the flowers open a soft rose-pink.

Close by, but very much in their own space, are the Baptisia x variicolor ‘Twilite Prairieblues’. Where many perennials are happy to be moved if you don’t find them the right position, you need to place the False Indigo in the right place the first time, because they like to put their feet down and hate disturbance thereafter. Being leguminous they fix their own nitrogen and are happy in the rubbly soil. As prairie-dwellers they hate to be overshadowed and will dwindle if a neighbour throws shade, but given a place they like with the surround of good light, they are long-lived and easy.

I have been experimenting with several of the hybrids for their longevity and their curious in-between colours and this one is a beauty. The female parent is the more usual indigo blue B. australis, but the male parent here is the yellow flowered B. sphaerocarpa and this provides the yellow keel. The colour of the standards is neither one thing nor another. A smoky violet-purple, without being muddied.

Rising fast and tall and again racing to the solstice, the lupin-like flowers strike a vertical accent whilst in flower. As they go to seed the plant becomes a rounded form that you need to allow room for as it fills out as it matures. The presence in summer is strong and definite, with good healthy glaucous foliage and, later, long-lasting seedpods that darken in winter to charcoal-black.

Though from the altogether different growing conditions of the cool damp meadows of southern China, the Iris chrysographes ‘Black Form’ refers here to the winter colours of those baptisia seedpods. Though iris could become a serious obsession, the reappearance of this one every June is always spellbinding. Black on first appearance, but the deepest royal purple on closer observation, they are worthy of a backdrop against which they will not be lost. In the garden they are allowed to hover in the paler suspension of Bowles’ Golden Grass, where their beautiful form is made all that much clearer. And here too, the stipa shows us that it is worth experimenting with associations you might not choose for their cultural compatability, but for what they might inspire beyond their place in the garden.