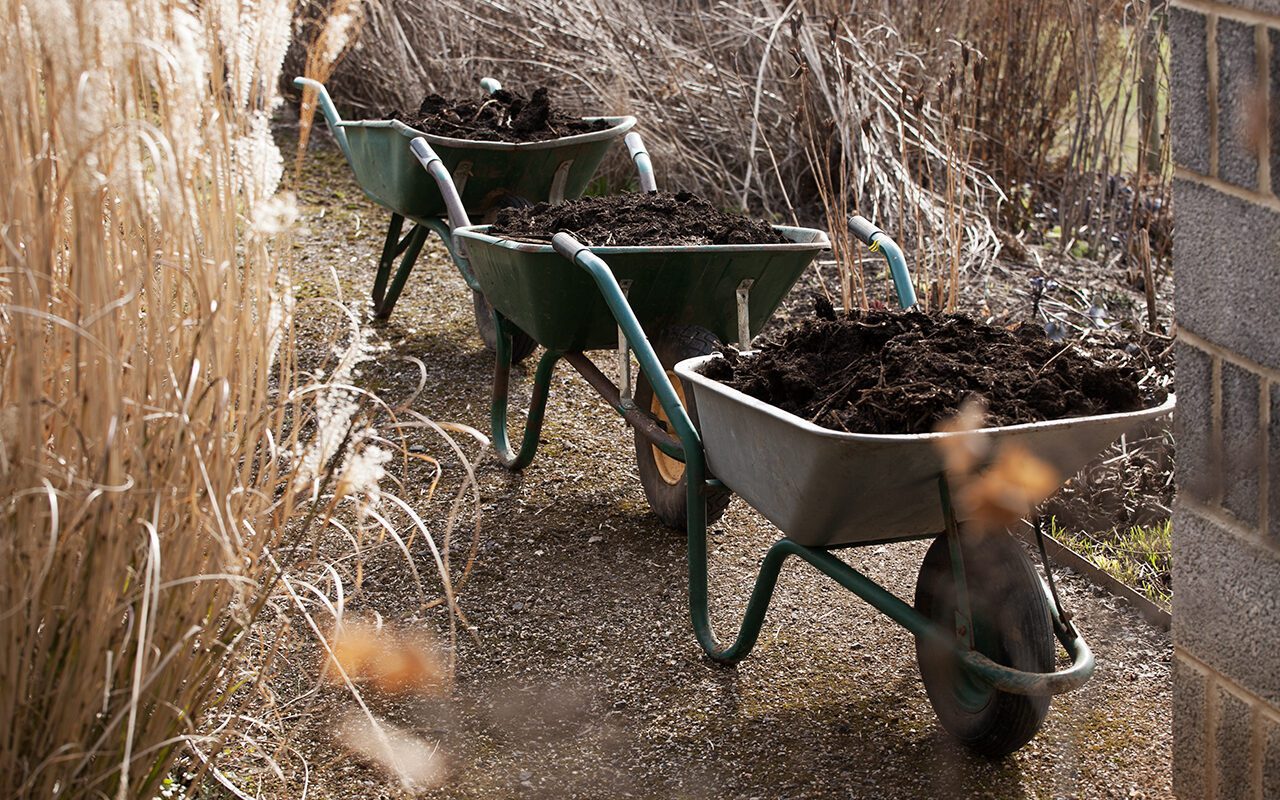 A chill easterly wind has held us firmly in its grip, whistling around the house and freezing the puddles and the muddy gateways.  The pots of early bulbs have frozen solid even up by the house, their growth suspended for now. I look out over a landscape that feels right for February. A crunch underfoot and the mixed feeling of knowing this is as it should be, but hoping that the bay tree will survive the scorch it has suffered from being left to fend for itself in previous years. Wrapped in advance of the freeze last week, I’m feeling hopeful.

This is our last week of winter work. I drew up a list in late November that we started as soon as the foliage was down on the trees. Weekly tasks beyond the garden that take us out into the rougher places where energies are only applied when the garden itself is resting.

Ten years on and we have begun thinning in the blossom wood to allow the young saplings there the room to become trees. The fast growing hawthorn and Cornus stolonifera, have served their purpose as nurse trees. The microclimate they have provided for the slower growing oaks and Sorbus torminalis has allowed for the canopies to meet and the ground to be protected.  Returning there in this period of dormancy we spend a couple of days making gentle clearances. Felled wood is pulled out and logged and the brash is made into brush piles where it slowly moulders back to earth whilst providing shelter for the critters. After snow you can see their footprints going back and forth from these protected places so that we now feel like intruders in the wood.  We will revisit for the blossom, but as soon as the nettles that have claimed the open ground have sprung we will leave this place in peace for the summer.

Every year I make it my mission to return trees to the land. At first it was to complement the ash, which is our dominant tree, but now it is to replace them as we are beginning to see the brutal effects of the Ash Die Back that is sweeping the country. To keep the fields that we are retaining for meadow open, new trees have been worked into gaps in the hedges – English lime and field maple – whilst oaks are placed by the gates as marker trees. This year we planted thirty oaks along an open stretch of hedge to extend the still air that is usually harboured to one side of the hedge and provides a hunting grounds for owls and bats. The higher canopy will eventually harbour an invisible highway of stillness that extends their territory and also a future roost for the birds that currently pass through the open landscape. Though we will never see the trees mature, it is a fine feeling to imagine these places and to help begin their futures.

Working slowly inwards, the winter works this year have included the restoration of a hedge below the milking barn that was mostly taken over by elder. The elder is the bully in a hedge, growing faster and muscling out its neighbours, so the plan has not been to eliminate the elder but diminish its numbers where it has become dominant. Three years ago, in preparation for this moment, I sowed hawthorn and guelder rose, wild privet, eglantine rose and spindle from our own saved seed. These youngsters are now ready to be planted, so the old hedge was felled to the base to allow us the chance to pull out the farm detritus that was put there to gap up the holes. Old bedsteads, buckled railings and a chain harrow in this instance. The elder roots will be grubbed out and the remaining hawthorn allowed to re-shoot. We stacked the prunings as a dead hedge to one side where it will be allowed to rot and in the meantime protect the young hedglings that plug the gaps. A new stock-proof fence to the open side will keep them secure until they are grown and established.

With time finally playing into our hands through not splitting our life with London, the orchard was pruned for the first time properly. I had always intended the trees to be grown to full size and not pruned for production, but we still need to plan for health and good structure. Any diseased wood was taken away first, some trees being more prone to canker than others. Crossing branches were targeted next and then the centre of the trees gently opened to allow free air movement. My grandfather said to maintain their health you should be able to throw your cap through an apple tree. Our trees will be more relaxed than this, but it is good to see, now that they are a decade old, the varieties each assuming their own character. You only know this from growing something for yourself and the thought often has me pondering that you really need another lifetime of learning.

This winter I’ve also had time to revisit the espaliered pears, which are now showing me where I have been too busy to make the right moves in training the limbs in past summers. On one such example, I had to make do with limbs trained from a lower tier where I had simply missed the boat because I was travelling too much for work. You need to plan ahead with trained fruit as the years become mapped in the limbs.  A restoration prune, to remove some wood to promote the growth where I need it, should hopefully address time lived too fast and be more worthy of my Wisley training. A gardener’s training that has made me feel a little guilty every time I see my neglect advertised by the poorly trained branches.

Onward, in readiness for beginning the big cut back in the garden next week, we are clearing the compost heap as the final job on the winter works list. The clearances from last year are now composted and good for mulching and soil improvement. One cycle completed, the profits from the last one in barrows full of goodness and the next about to begin.