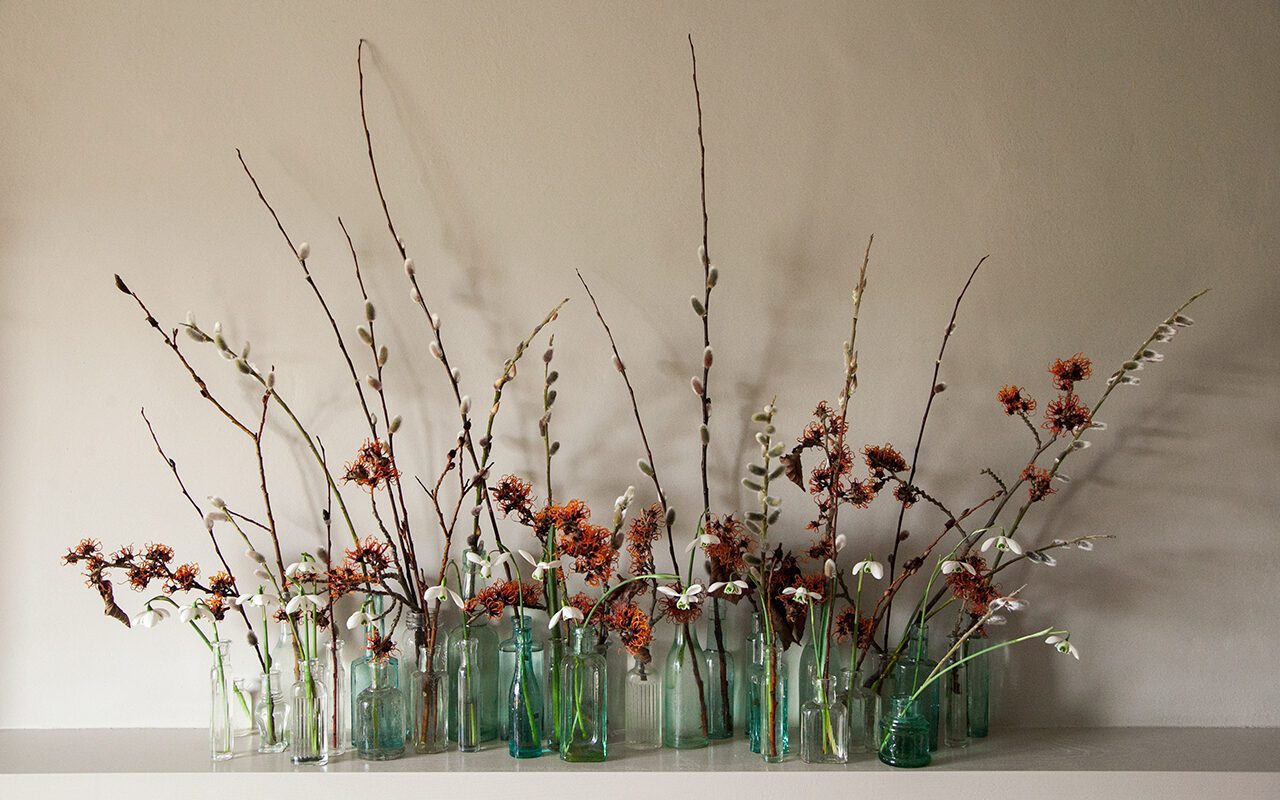 Last week we passed the half way point between the winter solstice and the spring equinox; the Gaelic celebration of Imbolc.  Here in the garden there is a notable shift from slumber. Bright rosettes amongst the leaf litter, looking determined and suddenly visible. Newly green amongst the darkness of foliage from last year, which is daily being pulled to earth by the earthworms and mouldering. The cycle making way and the old providing for the new as the nights become shorter.

In the garden, it was the witch hazel which were the first to stir. I grew them in pots when we were living in Peckham and were pushed for space and needy for more. They were brought up close to the house where their winter filaments could be given close and regular examination. They grew surprisingly well considering their confinement, to the point of outgrowing their summer holding ground in the shadows at the end. I passed them on as they outgrew us. ‘Jelena’ was big enough to warrant the hire of a white van and driver to take it to Nigel Slater in his north London garden. A number went to clients and the remainder came with us in an ark of the best plants to live with us here.

Our sunny hillside with its desiccating breeze does not provide the ideal conditions for hamamelis. In an ideal world they would go down in the hollows, where the air is still and the cool shadows finger from the wood on the other side of the stream. Although they are modest and do bear a likeness to hazel in summer, their winter value is bright and otherworldly. Too bright and too ornamental to sit in the company of natives.

As a highlight of these dark months, the witch hazels are worthy of the pockets of shelter up in the garden.  Hamamelis x intermedia ‘Gingerbread’ claims one such position alongside the old milking barn, where the west-facing aspect protects it from the sun for more than half the day when it is at its height. On a still day a delicious, zesty perfume describes a definable place that you encounter as you move alongside the barn. It makes your mouth water. The colour of ‘Gingerbread’ is well named. It is hot and spicy, but dims after a couple of days perfuming the mantlepiece.

The plant must be about fifteen years old, given its time in London and the early years here still confined to its pot. Though slow to settle in, the limbs now reach out widely and provide me with a little microclimate. Its branches offering a shadowy place beneath for lime green hellebores and paris and a climbing frame for scarlet Tropaeolum speciosum, which covers for the witch hazel’s modesty come the summer.

The willows come once the witch hazel are already in bloom, their neatly fitting sheaths thrown aside as the pussies begin to swell. Salix daphnoides ‘Aglaia’ with dark mahogany stems and silver-white catkins sits a walk away as an eyecatcher down in the ditch. Closer in Salix gracilistyla, acts as guardian to either side of the lower garden gate. Not so commonly available as the black form, S. gracilistyla ‘Melanostachys’, or the pink-pussied S. g. ‘Mount Aso’, I love the straight species for the delicacy of silvery-grey. Like the fur of a rabbit, it is impossible not to touch as you move to and fro and I have let the branches reach in from either side to encourage this interaction. As the flowers go over, the bushes will be hard pruned to a framework in early April to keep the plants within bounds so you can see over them and still have the view.

Just a week after the winter mid-way we find ourselves at peak snowdrop. Those in the warmest positions where they bask in winter sunshine have been out already for a fortnight, but right now is the week of the majority, at their most pristine and poised. What the Japanese call shun, the moment when a plant or crop is full of its vital and optimum energy.

I have fallen under the spell, for the snowdrop’s solitary presence is a tonic when you are pining for life. Their ability to draw you out into the winter and make it a place that is finer for their presence is why, perhaps, when you do find yourself spellbound, you begin to want for more. That is another story altogether. One which I will share with you another year when I feel I know more, but suffice to say I have begun a collection of specials. All three here (each named after characters from Greek mythology) are readily available for being reliably good plants and you can buy them easily enough in-the-green, as bare root bulbs from Beth Chatto’s for planting out now. ‘Galatea’ was first given to me by our friend Tania.  The ‘goddess of calm seas’ is a fine reference, but the long pedicel suspends the flower in the arc of a fishing rod, so if there is a breeze, they are wonderfully mobile. In the warmth or on a bright day, they fling their petals back in a joyous movement to expose their skirts to the bees.

Though the doubles tend to last longer in flower, they are not always my favourites. The bees favour them less because they are harder to pollinate and the simplicity of the flower can often be lost in frilled petticoats. Not these two, which both have an interior that is beautifully tailored. ‘Hippolyta’, daughter of the Queen of the Amazons, is the shorter and more upright of the two with a fullness and roundness to the flower which is distinctive from a distance.  ‘Dionysus’ has both poise and height, though it is good to plant the doubles on a slope so that you can admire their undergarments. Named after the god of wine (and ritual madness) I am happy to be swept along in a little obsession and midwinter mania.