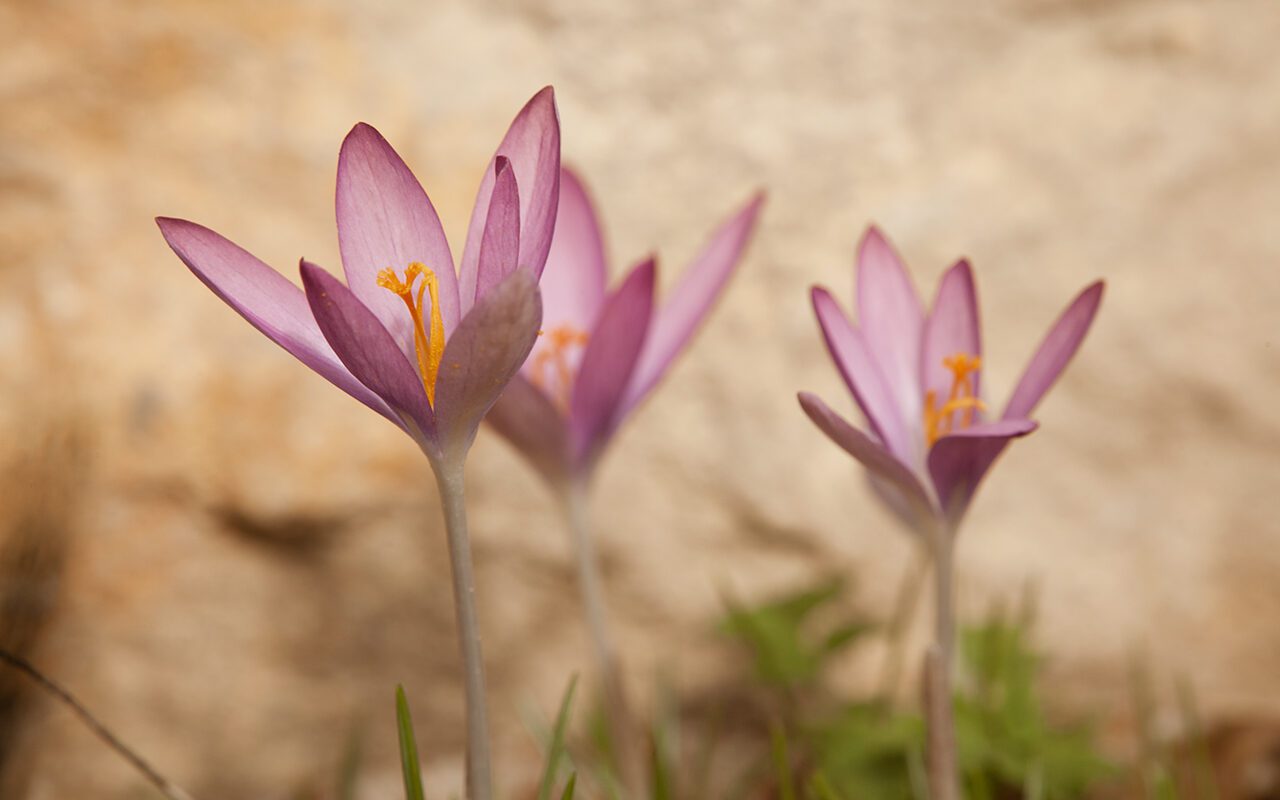 Against the odds, the delicate Crocus tommasinianus ‘Albus’ spear the turf on the bank in front of the house. When you first become aware of their presence earlier in the month it is easy to mistake their pale tapers for the light reflecting off blades of grass, but suddenly and all at once they are free. Standing tall enough above the sward to shiver in the slightest of breezes and opening wide in a sunny interlude to reveal orange stamens, yellowed throats and nectar for the early bees.

I first grew Crocus tommasinianus in the Peckham garden and learned to love it there for being the superior cousin to the ‘Dutch’ Crocus vernus which stud front lawns in spring like spilled tins of Quality Street. I did not know it then, but I had been supplied with the true species, which has the palest silvery-lilac reverse to the petals with the colour held within. I have since repeated my orders, again and again and from different places, only to find I have planted a thousand ‘Ruby Giant’ here or two thousand ‘Whitewell Purple’ there. These darker selections are often mis-supplied and sit less lightly for their weight of saturated colour.

Just up the lane and making the point that they are happy there, the true form has taken over our neighbours’ garden. The sisters that live there are natural gardeners and have been tending theirs now for decades. Without competition the crocus have seeded freely, to the point of flooding the open ground of their borders, seeding into the crowns of all the plants and seizing every niche between paving stones. The garden is free and joyous and Josie and Rachel never see their occupancy as a problem.

We have struck up a friendship and Rachel has generously allowed me to dig them in-the-green immediately after flowering so that I do not have to depend upon the vagaries of the bulb suppliers. I am going to keep them out of the beds here, however, as I want to work in the garden just as they come into leaf when I’m preparing the garden for spring. The sunny banks at the back of the house are where I am hoping they will naturalise. The free-draining slope there is ideal, because they like dry ground when they are dormant and the sunshine ensures that their flowers, which are light sensitive, open to reveal their interiors. When they do, you feel your heart lift and the long dark winter retreat.

I can already see from their behaviour in the grass under the young crab apples that they will not seed as freely as they have in the open ground of Josie and Rachel’s garden. Though happy in grass, the lushness of our meadows is probably too much for the young seedlings to take a hold. I hope in time, and once the grass thins as the crab apples assert themselves, that they will take to a lighter sward and begin to make the place their own. This is worth waiting for and every year I am adding a few more with Narcissus jonquilla and Anemone blanda to follow after their early blaze is over.

Shipton Bulbs stock a number of special selections that are subtler than the named varieties above. The rosy Crocus tommasinianus ‘Roseus’ (main image) and C. t. ‘Pictus’ which looks as though the tips of the petals have been dipped in ink. The white form, Crocus tommasinianus ‘Albus’, is very choice and, as they do not come as cheap, I ordered a couple of handfuls and gave them their own place on on the bank at the front of the house in the hope that they will not cross with the others at the back. The position here is exposed to our winds that whip across the open ground, but they stand bravely and mark the shift in the season with the snowdrops and the promise of what lies just around the corner.