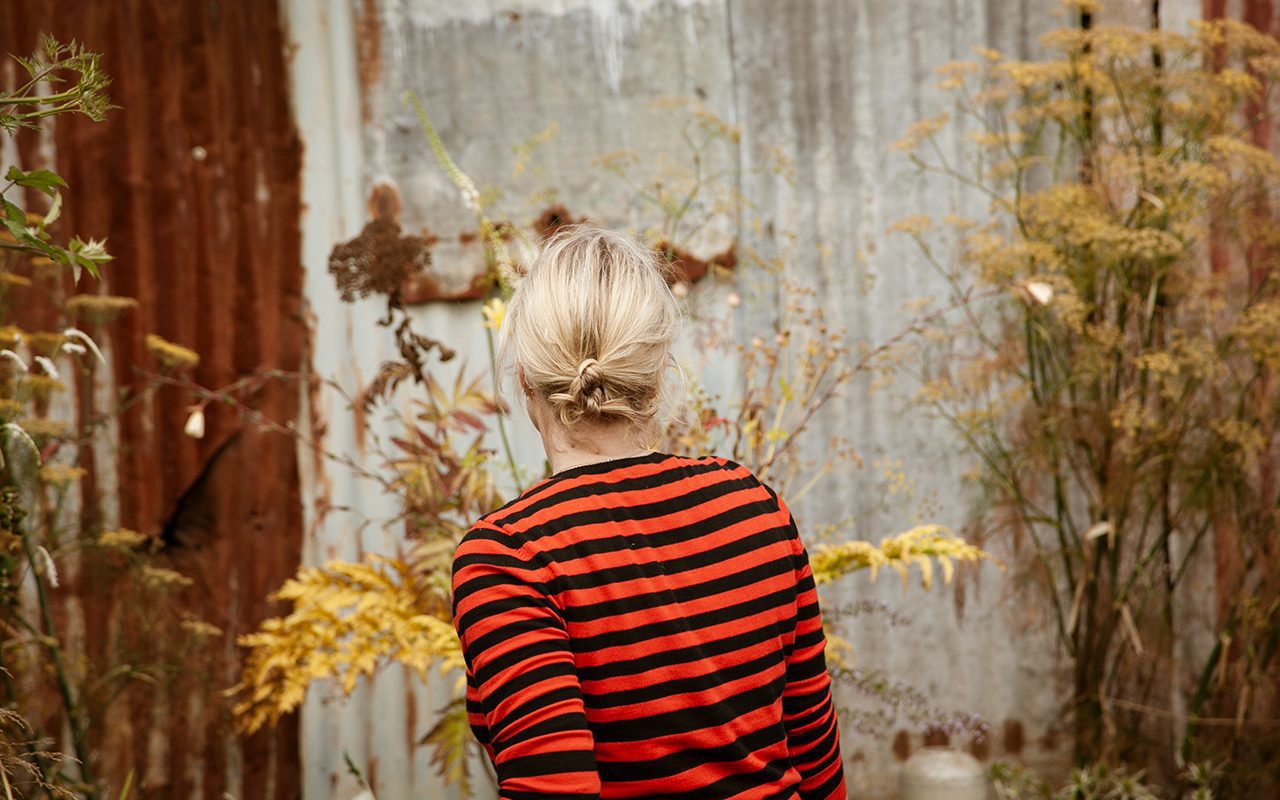 Although I already knew of her by name, reputation and Instagram it was at the 2015 Port Eliot Festival, where we were both judges for the Flower Show, that I first met Flora Starkey. We hit it off instantly, finding that we gravitated towards the same entries in each of the show classes; those where the immediacy, spirit and freedom of the arrangement was more important than technical proficiency, complexity or sophistication.

These are some of the very qualities that set Flora’s work apart and she is rightly feted for her lightness of touch, very particular use of colour and sensitivity to decay and the use of the ephemeral in her arrangements, which have a melancholy beauty and Late Romantic sensibility. Amongst the new generation of floral artists hers is a completely distinctive vision.

I knew immediately that it would be exciting to give Flora the opportunity to come to Hillside and see what she made of our selection of plants and flowers. Although it has taken several years to come to fruition, finally last week Flora came.

After a walk around the garden taking everything in (and impressing me with her plant knowledge) Flora identified the things she most wanted to use. It was wonderful to see her working with such intent focus and speed. The instinctive way in which she both selected plants from the garden and then placed them together in the arrangements was both very down to earth and practical, but also full of the mystery of intuitive artistic expression.

Over a glass of wine after an adrenalin charged afternoon, I asked Flora if she would like to come back to see the garden in another season. ‘Of course !’, she said. And so, schedules allowing, we are planning for Flora to return to make further floral portraits of the garden here in autumn, winter and spring.

On arriving at Hillside, it is immediately apparent how the land holds the house & outbuildings central amongst the different areas of garden, the fields and valley beyond. Sitting outside, while Huw made a pot of tea, I had a strong sense of the patchwork of history of the place and the different stories that have been woven there over time. There is magic in somewhere so loved.

We chose the location for the shots outside one of the original barns surrounded by the kitchen garden – a place of old & new. For me, the space is always the starting point of any arrangement and the corrugated metal backdrop with its patches of rust led to Huw’s collection of stoneware vases.

Then to the garden. I wanted to create an arrangement from this setting while impacting on it as little as possible, so we cut sparingly – one or two stems from each plant – some of which had already been blown over in the wind. I chose what I felt captured the feel of this time of year, high summer with autumnal undertones. I’m always drawn to the changing colour of the leaves as they move through the seasons, the most beautiful stems in my opinion are the ones in transition or decline.

I felt there were two stories in the flowers at Hillside in early August: firstly the creams and buttery yellows with the odd splash of blue & lavender, and then the drama and heat of the reds, dark purples and browns. So we decided on two arrangements. I wanted to show the flowers for what they are: wild and changing, not too ‘arranged’, and of their place. Using a collection of mixed sized vases to make one piece is a way that I often like to work as it allows for a fairly large arrangement whilst giving more space in between the stems.

The molopospermum led the first with its sculptural leaves of bright yellow turning rust brown, and then a tall stem of Achillea chrysocoma ‘Grandiflora’, dried and curled at the top. Further down the stem, the leaves became a rainbow mix of pale green fused with yellow and wine red.

Evening primrose, fennel, actaea and Bupleurum longifolium ‘Bronze Beauty’ followed to give height and structure and all in different stages between flower & seed. This is where I find the true beauty, in the changes through which every plant evolves. Then a single stem of Rose ‘The Lark Ascending’, to add a touch of glamour, quickly offset with some bone coloured poppy heads. A hemerocallis lily was softened by some chasmanthium and two varieties of Calamintha in cream and lavender to visually draw the stems together. Finally some echinops and a sprig of Eryngium giganteum snipped from under the table to finish.

The second arrangement featured pops of bright red in the dahlias, crocosmia and geranium against a tangled backdrop of daucus, verbena, sanguisorba, persicaria and asters with a single arching stem of dierama in seed swinging above. Again, it was the mottled & turning leaves of the Nepeta ‘Blue Dragon’ with its dried flower heads that brought the most joy.

This really must be the most satisfying kind of creativity: working with flowers in your direct locality & the opportunity to use so-called imperfect stems, the beauty in which is so often strangely overlooked.