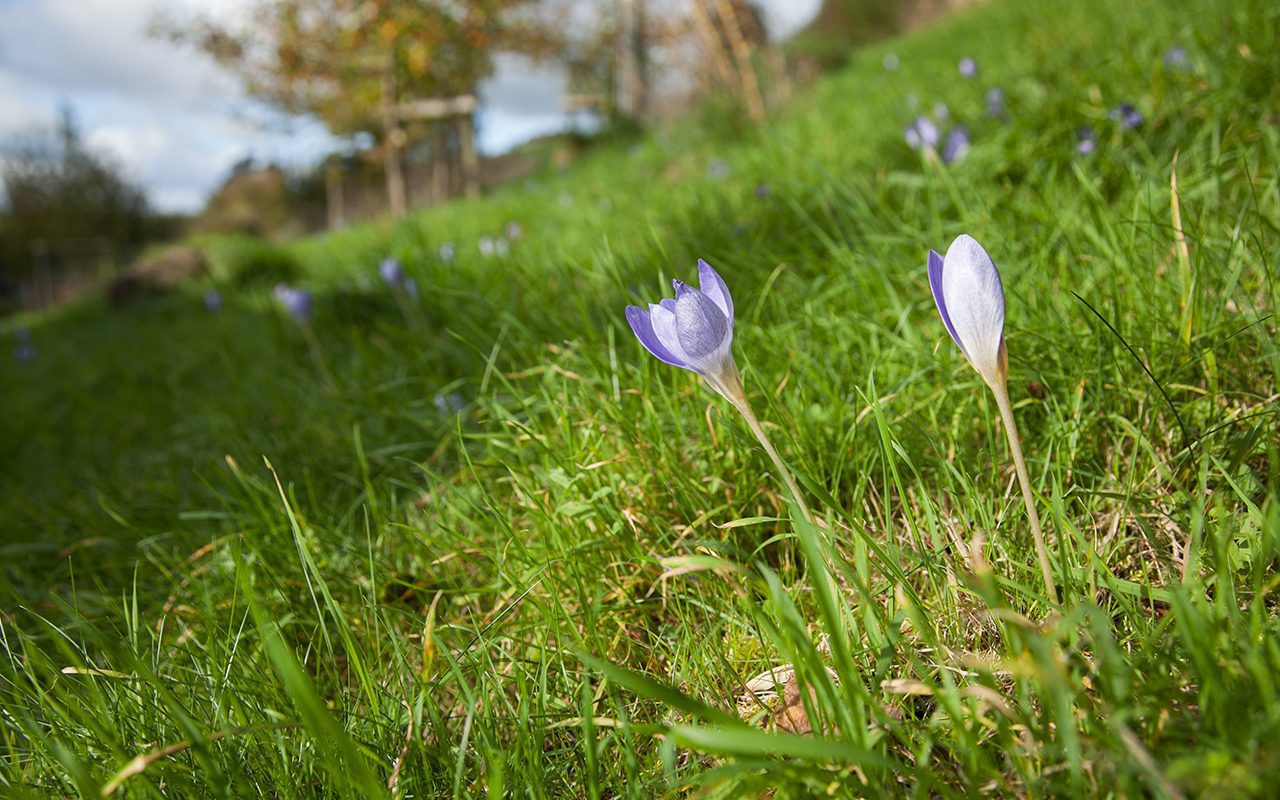 The autumn crocus appear late with the last of the asters and braving the change in the weather. Although I have only just planted the real saffron crocus, Crocus sativus, and wait to see whether it can handle our moist Somerset loam, I can now say squarely that I can depend upon Crocus speciosus, which are beginning to naturalise on the bulb bank behind the house. This year they came in the first two weeks of October during a fortnight of rain and heavy skies that accelerated the feeling of the evenings drawing in, but their appearance completely runs against the retreating tide and the feeling that goes with it.

Triggered by the very cool and the damp in the ground that puts an end to the growing season, they score the palest lilac tapers into the grassy banks. The true colour of the interior is suggested, but held back on the reverse when the buds are closed, but opened by sunshine or the warmth of a room if you pick one, they flare a bright lilac. Look inside and the violet tracery of dark veins maps an upward movement, the orange styles, luminous and hovering in a pool of colour. Look deeper and the dip of a yellow throat appears to throw light from this inner world.

Seen from the kitchen that is dug into the hill at the back of the house, the crocus appear just above eye level where I have planted them in an extensive drift. Standing tall at around 20cm, the stems push the flowers free of the meadow, which was cut late in August to make way for their arrival. The stems are impossibly delicate and, grown in an open position, they will easily break, not completely, but enough to topple the flower so that it lies fallen by those that have yet to do so. Planted in grass, which by October is grown just enough to support them, the majority stay standing and you can rely upon their display. A gentle autumn is what they enjoy most of course, but their emergence is always late enough to catch the turn in the weather.

Native to Greece, northern Turkey and Iran, the hot dry summers put the bulbs into ensured dormancy and a wet autumn triggers growth. Here they are best in a position that emulates their homeland and dries in the summer months and hydrates again in the winter when their foliage comes above ground to feed. A position under deciduous trees, where light comes to earth in the winter and the rootiness of ground dries in summer is ideal. Turf or meadow that remains uncut until their foliage withers in spring will also protects them during dormancy. If you are introducing the bulbs into turf, do so early in the bulb planting season to allow for their rise to October flower. Planting deep, up to 12cm, will also help keep them out of reach of mice, which are a favourite predator.

In the garden proper, I have been slowly introducing the white form, Crocus speciosus ‘Albus’, in areas that are sheltered from wind. In the lea of the barn where the low ground cover of violets and Waldsteinia ternata protect winter cyclamen, I have found them a niche. The white form is more ethereal still than the true species. Simpler for being white inside and out, but still with the charge of the orange style and the yellow throat, they are worth devoting a corner to for late season contemplation. Their grassy foliage with its silvery midrib comes in early winter and makes a pretty addition and complement to the marbling of the cyclamen leaves. Something to look forward to and to rely upon as the days shorten.