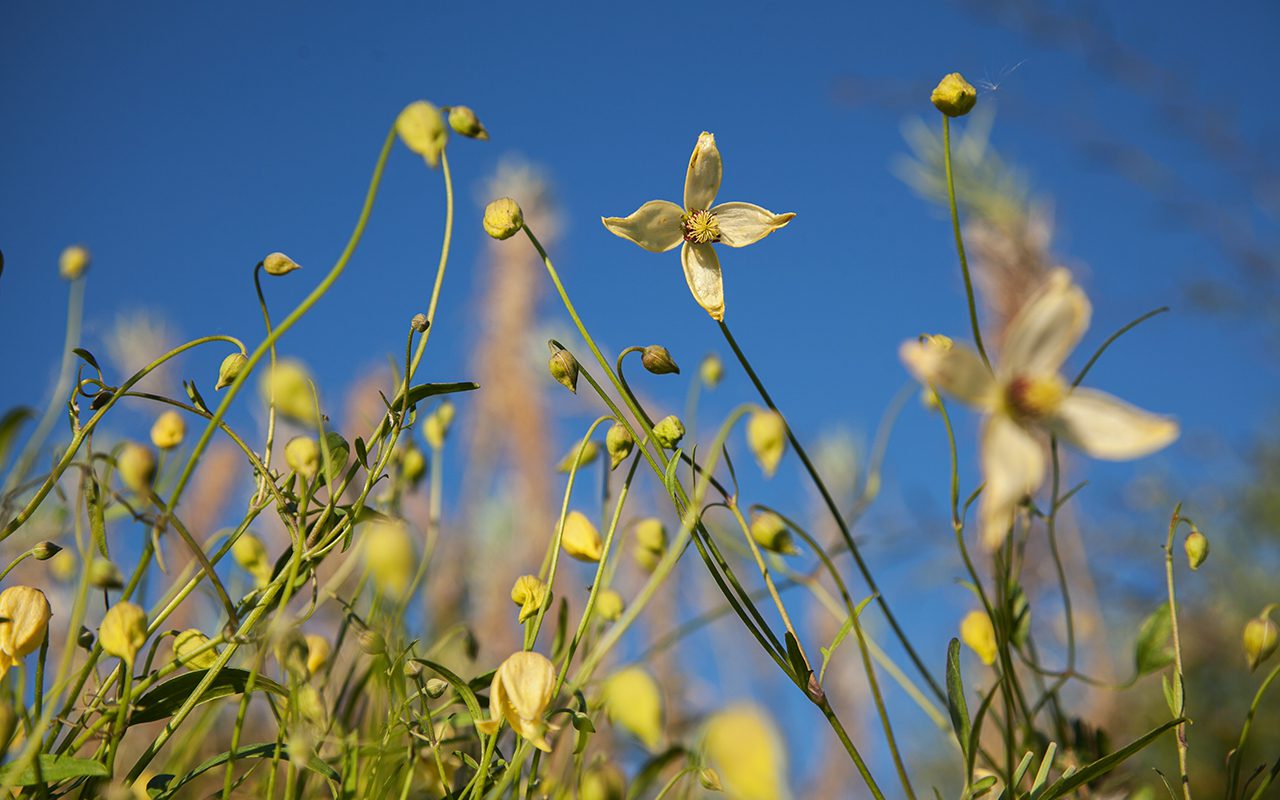 September is surely one of the most beautiful months. Evenings cooling, grass wet again with dew, but warmth still in the sun. The tiredness that sometimes hangs over August is now refreshed after rains. The meadows flushed with new green and germination happening everywhere. A rash of poppy seedlings seizing the moment to establish themselves before winter and, of course, the sea of dandelions. The very moment I thought about back in May when the airborne seed moved in silken clouds down the valley, but I’d all but forgotten whilst they lay dormant in the dry weeks of summer.

With the change we welcome a new wave of energy in the garden. The first of the asters, the sudden emergence of naked colchicum and smatterings of autumn flowering cyclamen, the harbingers of this shoulder season. Most lovely of all on this particular September day is the Clematis ‘Sundance’ which has been readying itself for autumn. I have it on the edge of the garden close to the milking barn veranda where, if ever we do sit and look, we are inclined to catch the warming, morning rays. The covered veranda is our breakfast place, so it is a moment in the garden which affords close scrutiny and where we need the detail to satisfy the time we take to pause there. In spring we have Paeonia mlokosewitschii, followed by navy blue camassias twinned with the blackest Iris chrysographes.

Backlit for most of the first part of the day, I like to play with the morning light here. The sparkle caught in pale flowers and the potential of shimmer in flexing willows. Thalictrum ‘Splendide White’ and white again with the albino form of the rosebay willow herb. Gone to seed now and disseminating the seed into the air much as the dandelions do in May, the willow herb is now showing that it is done. But not so Clematis ‘Sundance’ which, despite its modesty, is flushed with a countless number of flowers craning on wiry necks and reaching towards the sun. Palest lemon yellow tepals from one parent, Clematis tangutica, and violet anthers and the refined foliage from its second parent, C. ispahanica.

‘Sundance’ is one of several herbaceous clematis that I have growing in my stock beds to test their worthiness, for most need support and have to prove that they deserve it. Though I prefer to use perennials that require little staking, ‘Sundance’ would flounder around on the ground if you didn’t help it, as it reaches as much as eight feet when given support. Cut back to about knee height here in February, it needs a framework of hazel twigs to ascend, as it has lost its climbing parent’s ability in C. tangutica to twine its leaf stems around whatever will provide it with support. An hour or two fashioning twiggy cages in spring will see it top its support and then cascade down over the boundary fence, much as old man’s beard does from a hedge, but with considerably better behaviour.

During the course of September, the multitude of pale flowers slowly give way to a cumulo nimbus of silken seed heads so that one moment of delight is replaced by yet another as the growing season dwindles.