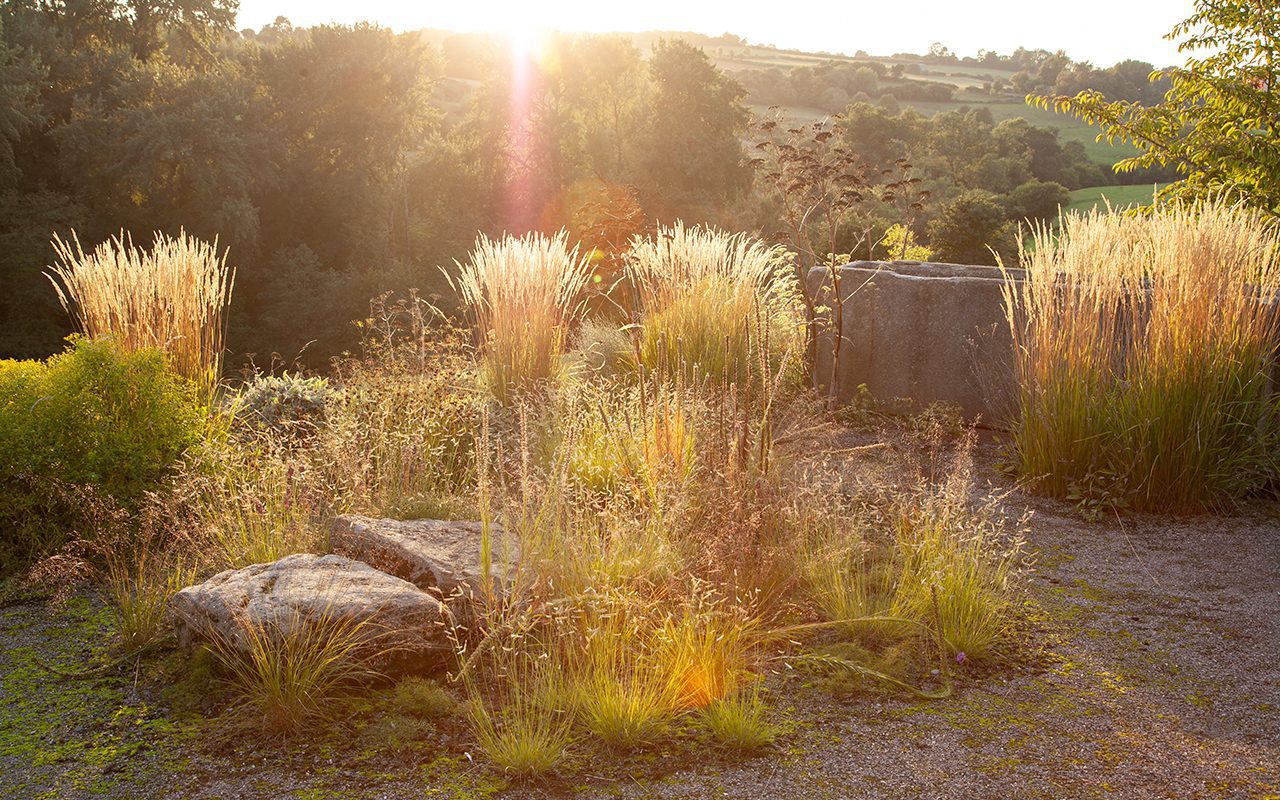 When we arrived here, the milking barn that sits just below the house was marooned in a patchwork of concrete slabs that the farmer before us had poured to hold the slopes around the building. We had plans for the barn to be renovated as my workspace and for the old yard to become a place for the barn. Somewhere to take in the view up the valley and for the planting here to capture the evening light.

The trough that is now the anchor point in the yard was the catalyst. We hired the largest forklift to lift the trough from the waggon that parked in the layby at the top of the hill, but as we edged down the single-track lane, we quickly saw that maybe we had bitten off more than we could chew. Weighing in at about twenty tonnes all in, the concrete patchwork buckled like a pie crust as we inched the trough down the slope and into the old yard. We were a way off yet from doing the renovations to the buildings, so the trough sat marooned in the remains of the yard and, in the time that followed, the interlopers that found their way into the cracks and gave the yard grace, spawned the idea for the mood for the planting. Herb Robert and hogweed, Timothy grasses and willowherb. Plants that could survive on very little and, whilst we were waiting to make our next move, made the place their own.

Today the trough strikes a horizontal on the slopes and holds and frames the space with its weight and gravity. Once we scraped the crust of the old yard away, I did very little to improve the ground in the bulk of the yard so that in the centre we are planting mostly into the rubble that underpinned the old concrete. Pockets of soil were introduced around the periphery so that I could rely on a number of placeholders such as the Calamagrostis x acutiflora ‘Karl Foerster’ that step through the space and capture the light and the wind that moves through the valley. Bloody Cranesbill and acid yellow Achillea ‘Moonbeam’, giant fennels and Devils Bit Scabious echo the pioneers that took to the concrete yard, but I have been careful not to overplant to retain the old airiness of the place as it once was.

The old concrete from there yard was crushed into a fine enough aggregate and pulled over the whole surface to bring everything together and into the rubbly ground I planted two late season grasses which would capture the light in late summer. Sporobolus heterolepis, the breathy Prairie Dropseed and, amongst its delicate cloud, Bouteloua gracilis, the eyebrow grass from the Great Plains of North America. Arvensis Perennials had kindly gifted me three plants of the cultivar ‘Blonde Ambition’ with the assurance that it would grow well in the UK if given free-draining ground.

I have been using the eyebrow grass in plantings in California where water is scarce and where every move we make has to be water-wise. Until the gift encouraged me to think of it being viable here, I’d thought our summers wouldn’t be long enough and the winters too wet for a plant that I’d only seen growing in desert. So, put to the test in the knowledge that they would get all the light I could offer and ground that drained freely, I am pleased to report that three years later, they have rather made the yard.

Late to emerge in May, but coming into their own in the second half of summer, ‘Blonde Ambition’ is nicely clump-forming and slightly shorter than the straight species that I’ve been drifting amongst chapparal natives in California. The inflorescence, which is tilted at right angles to the stem, is the eyebrow of the name and the distinctive horizontal accent that sets this grass apart from all others. Distinctive, but not so out of place that it feels wrong here, it has proved itself in this year’s heatwaves and drought. I chose not to water to put it to the test and they have rejoiced in the conditions and rather opened my eyes to the possibilities of how we might need to garden in the future. Punching through the light-capturing fleet of eyebrows I have added the soaring Liatris pycnostachya and the late and delicately flowering Allium carinatum var pulchellum for highlights in the tawny blond.