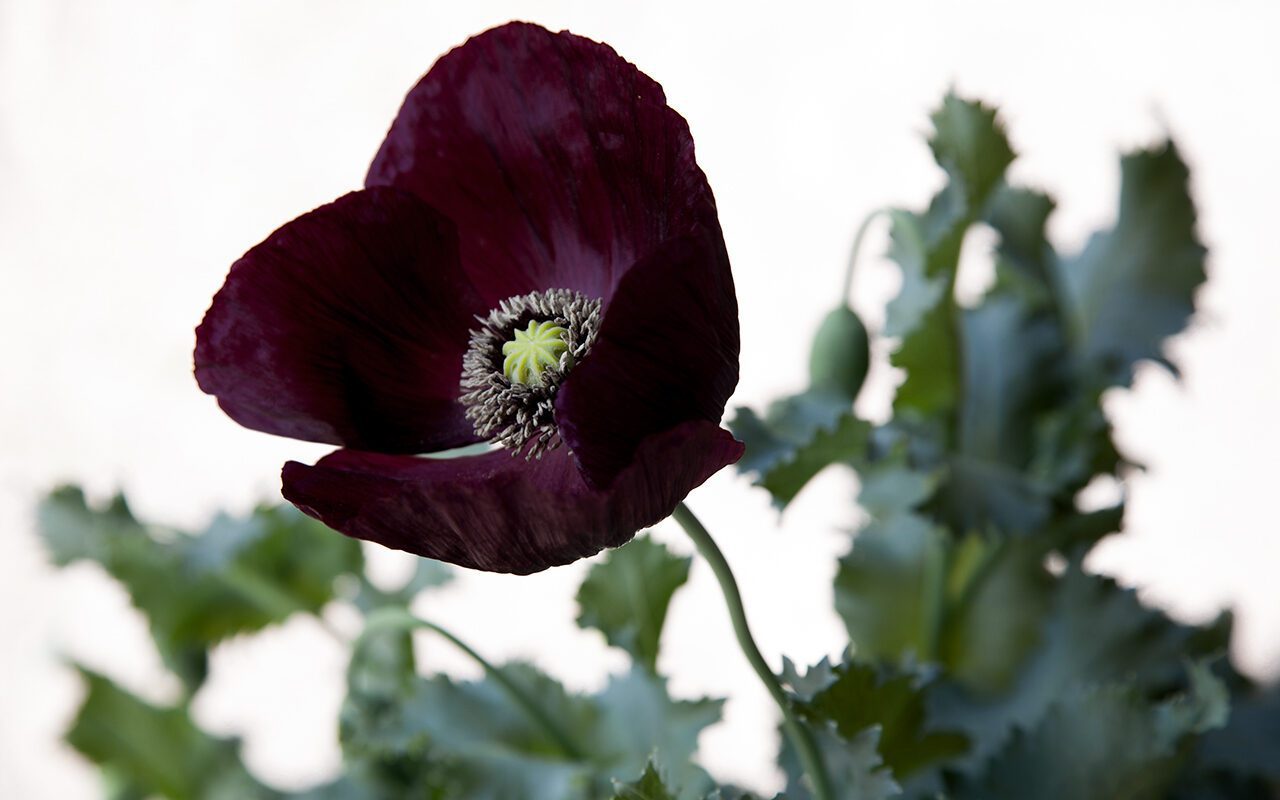 The opium poppies have been growing into the lengthening evenings, to race skyward and seize this early window of first summer. They come from nowhere it seems and typify the current feeling of the garden burgeoning.

Their seedlings are already visible in March and one of the first to germinate into open ground. Blue-green and easily distinguished, they take the disturbed places where there will be a gap to ascend into the very moment the weather warms. Being winter hardy and germinating the moment the season turns with the promise of spring, they have the advantage, hunkering down and establishing good roots and core strength. In truth there are several rounds of germination as seed is brought to the surface whilst cultivating, weeding or clearing the winter garden to expose fresh ground, but the first are the strongest, bulking up in April and muscling out anything nearby that might show a glimmer of tardiness. Their precocious behaviour extends to their siblings and you will need to thin a colony if you are after plants that are muscular and soaring.

I grow a black opium poppy here and it is my one and only. A single form and a chance find that I made when cycling to work once in my early twenties. They were standing tall alongside a black wooden bungalow in Hampshire. Black on black, fluttering against the stained shiplap. If I hadn’t been looking in the way that you do when you are under your own steam, I would have missed them completely. It was immediately clear, even at distance, that they were special so I plucked up the courage and knocked at the door to ask for seed. The owner, seeing I was smitten, took my name and address and later that summer an envelope arrived with the beginnings of a now very long association. It is one that I have nurtured annually, seeding a few every year in a new place for good measure and gifting to friends and clients that I know will keep the strain pure.

Although there are other named forms of dark opium poppy, several double blacks and the deep plum ‘Lauren’s Grape’ for instance, I’ve not seen another that is quite as dark and inky throughout. To maintain the strain, I have been territorial. I have never introduced another coloured opium poppy into a garden where I have been cultivating them and any that show the remotest sign of reverting are pulled before they can pollinate a dark one nearby. I look nervously on to neighbours up the lane who have them growing freely in their garden in every shade of mauve and pink, but breathe easy that, in the ten years we’ve been here, the bees that busy themselves there must be on another flight path.

After moving them here from Peckham, I cast the seed down into the freshly turned ground of our virgin plot. Broadcast in February, the plants were up in flower by June and providing me with a new and plentiful seedbank by the middle of July. Those seeds have now found their way into the compost heap where they are content to sit dormant until they are exposed again to light and potentially new places to conquer. We had a good colony in the asparagus bed a couple of years ago, amongst the roses and throughout the kitchen garden and I am now finding seedlings in the paths that must have been dropped whilst we were clearing the garden.

The chance happening of the pioneer seedling is always heartening and we leave a few in a new place every year for the delight in the new. The first seedling to flower this year has been living with us closely alongside our covered terrace. I saw the seedling had found a home in the late winter and wondered if it would be one that would survive our lines of desire into the garden. It has, soon growing big enough to negotiate and with the promise of this very moment that is seeing it suddenly present. A filling out of blue-green buds and then, one day, a tilt in the neck of the bud to indicate readiness.

The mornings bring the flowers, crumpled at first and then expanding like dragonfly wings do when they hatch. Dark satin petals cup pale stamens and bees soon find them, noisily working in laps, the enclosure of petals amplifying the sound of their frenzy. The flowers last two to three days at most, but there are enough to run a glorious fortnight whilst the balance shifts from buds to seedpods pods fattening and tilting skyward to show you that they have nearly reached their goal. When the leaves suddenly wither and the life force of the plant is gone you see that the pepper-pot seedpods are ripe and beginning to rupture. We leave a few standing for the joy of continuity, the mission accomplished, and scatter the rest for the pleasure of helping them extend their territory.