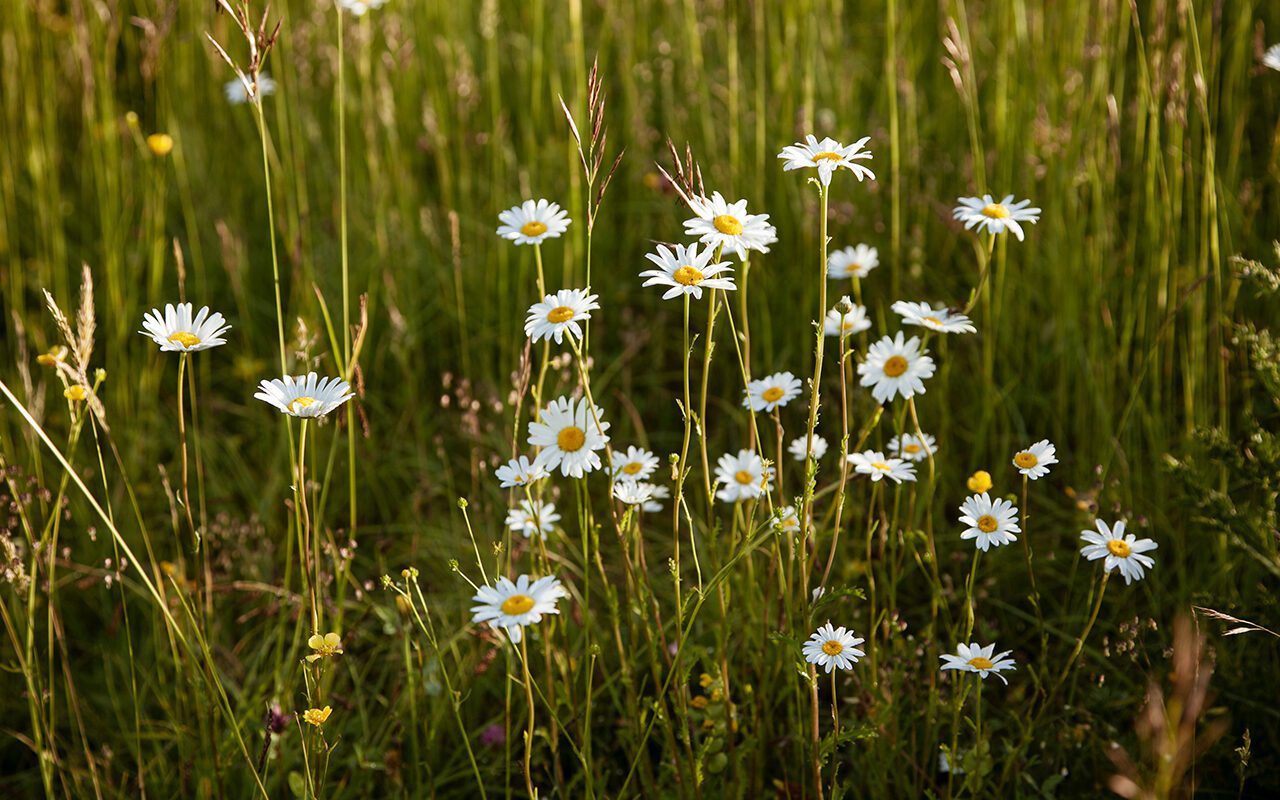 A tide of ox-eyes have surrounded us, lapping up the banks that come to meet the house at the front and running down the centre of the track at the back to make it impassable. I cannot bring myself to mow the strip that runs to the barns when the meadows are up, in part because they mark this moment. They stand bright, aloft and alone on stalks that raise them into their own space in the meadow. Moving as one when caught in the breeze, each flower is a point of individual brightness but together they flare, so that all you see is whiteness.

Leucanthemum vulgare is a simple plant, happiest when pioneering and taking new ground. The profligate seed, produced on youngsters that are often not even a year old, is light enough to travel, perhaps not far but far enough to seize open ground. Germinating as soon as the weather dampens with September dews, this year’s seed will already be hunkered down and big enough to cope with winter. They have the start they need to be ahead of the race the following summer and their precocious behaviour will see an explosion of daisies for two years or so. Then the knit they have so helpfully made to seal bare soil will be colonised by the slower to establish meadow plants which ease their hold and dim their presence.

We seeded the ground around us after the landscaping was complete in the autumn of 2016 so the daisies are still in their dominant period. They grow so densely in parts that you have to squint on a bright day. By night they bounce the moonlight, brightening the ceilings in the house and earning my favourite name, the Moon Daisy. When growing as thickly as they do in the early years, you begin to wonder if anything else has the room to form an association, but they live fast and die young and are then content to have a lighter presence.

I used their easy nature to my advantage when we were addressing the ground that had been thrown up after making the pond at Home Farm. Frances, my friend, client and collaborator, was keen to blend the pond seamlessly with the landscape beyond and so we sowed meadow to the rear of the pond and took the gravel from the drive down over the gentle slope that met the pond in the hollow which we softened by seeding the ox-eyes were directly into it.  We let it have its reign and within a year the pond sat in a sea of whiteness that met easily with the meadow and the wild carrots that proliferated there. It was an extraordinary place to pick your way through to the dark water. So simple and yet with so much life, return and generosity on the part of the daisies. We left them to blacken once they waned so that you saw the water again through the ghost of spent stems and then cut them back in September. An easy job with a strimmer or a scythe. A gentle weed in the autumn to remove seedling grasses was all we needed to do to retain the grand gesture.

Where we have over-seeded the old pasture here, their presence is entirely different. Seizing a window in the meadow is more difficult, so they smatter lightly where the Yellow Rattle diminishes the dominance of the grasses. The old pasture keeps the daisies in their place though, the closed system preventing the pioneer’s behaviour. They appear here and there and in lighter colonies where they find an opportunity, but are every bit as beautiful for fitting in and being happy to not even hint at world dominance.