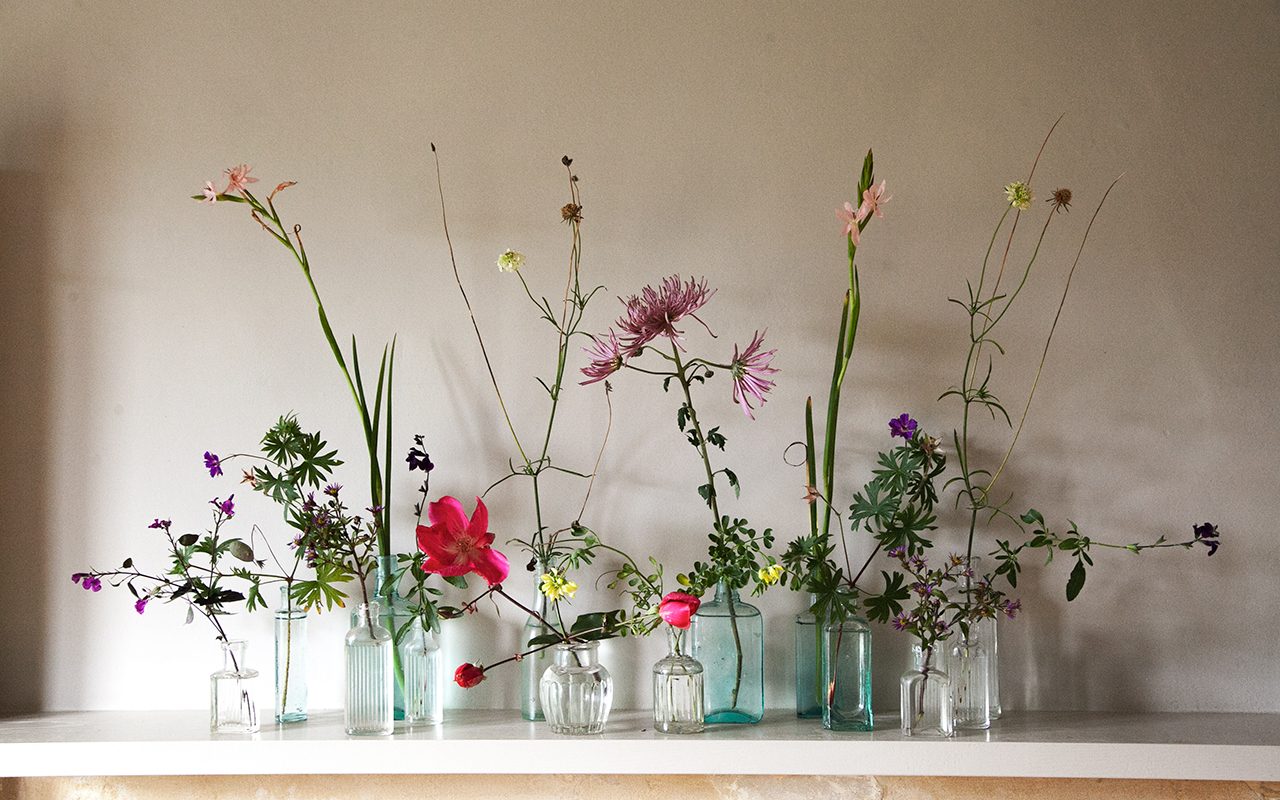 There was a heavy frost this morning and we were suspended for a while in a luminous mist. The wintry sun pushed through by lunchtime, the melt drip-dripping and the colour of thaw returning as the unification of freeze receded. Undeterred the Coronilla valentina subsp. glauca ‘Citrina’ emerged unscathed, liberating their sweet honey perfume in the sun.

We went on a hunt for flower to see what there might be left for the first winter mantlepiece. The pickings, now rarefied, feel held in a season beyond their natural life. A rogue Lunaria annua ‘Chedglow’ misfiring, but welcome for the reminder of the hot violet which you have to imagine as you move the seedlings around to where you want them to be in the autumn. My original plants, a dozen grown from seed two years ago, are now gone. Last year’s pennies threw down enough seed immediately beneath to need thinning and the transplants allowed me to spread a new colony along the lower slopes of the garden. Being biennial, it is good to have two generations on the go so that there will always be a few that come to flowe,r but enough to run an undercurrent of lustrously dark foliage in winter. It is never better than now, revealed again when most of its companions have retreated below ground.

The reach of the Geranium sanguineum ‘Tiny Monster’ is now pulling back to leave a shadow where it took the ground in the summer. It has been flowering since April, brightly and undeterred by all weathers. This larger than life selection of our native Bloody Cranesbill shows no signs of stopping as the clumps steadily expand. It is a slow creep, but a sure one. Short in stature at no more than a foot, you have to team it carefully if it is not to overwhelm its neighbours. We also have the true native G. sanguineum, grown from seed collected from the sand dunes on the Gower peninsula in Wales, and teamed with Rosa spinosissima from the same seed gathering. The two make a fine match, the geranium scrambling through the thorns of the thicket rose.

The pink Hesperantha was a gift from neighbours who gave us a mixed bag of corms including the earlier flowering H. coccinea ‘Major’. This hot red cousin flowers when there is heat in the sun, but gives way to this delicate shell-pink form (which we think is most likely to be ‘Mrs Hegarty’) as the days cool in October. I am not a fan of delicate pinks, preferring a pink with a punch, but it is hard not to love this one when it appears. I like it for standing alone at this time of year and for not having to compete for being so very late in the season. In terms of where they like to grow though, Hesperantha hail from open marshy ground in South Africa so you have to find them a retentive position with plenty of light to reach their basal foliage. I have them on the sunny side of Aster ericoides ‘Pink Cloud’ which they come with and then go beyond.

Equally hardy, and one of the longest-flowering plants in the garden, is the Scabiosa columbaria subsp. ochroleuca whose delicate pinpricks of lemon yellow are held high on wiry stems and are still enlivening the skeletons of Panicum and Deschampsia that are now collapsing around them. Even now they are a magnet for the hardiest bees and the odd peacock butterfly that ventures out in the weakening winter sun before hibernating.

Aster trifoliatus subsp. ageratoides ‘Ezo Murasaki’ is our very last aster to flower, but its season is still longer than most. I love its simplicity and soft, moody colour, but it has been out for so long now that sometimes I forget to look. This is one of the joys of the mantlepiece and of hanging on so late to make you refocus. Not so Rosa x odorata ‘Bengal Crimson’, for it is hard to pass by this strength of colour in the gathering monochrome of winter. I have given our plant the most sheltered corner I have, because it is always trying to push growth which gets savaged by cold winds. Here, in the lee of the wall at the end of the house, it flowers intermittently, often through January, paled then by the cold, but always welcome. Close by and also basking in the shelter of the warm wall is Salvia ‘Nachtvlinder’, another plant that would continue to flower uninterrupted if we did not have the freeze.

Next year I will protect the spider chrysanthemums, which come so late and need it to survive the frosts. This is one of the few that have survived the recent cold spell. I have not grown ‘Saratov Lilac’ before, but have taken cuttings which are in the frame to try again next year. I have also ordered several more to test my end of season resolve and hope a make-shift shelter of canes and sacking will suffice when the weather cools in October. We got away with it when I grew them in London, but not here where the frost is reliable and helps us to respect the season.