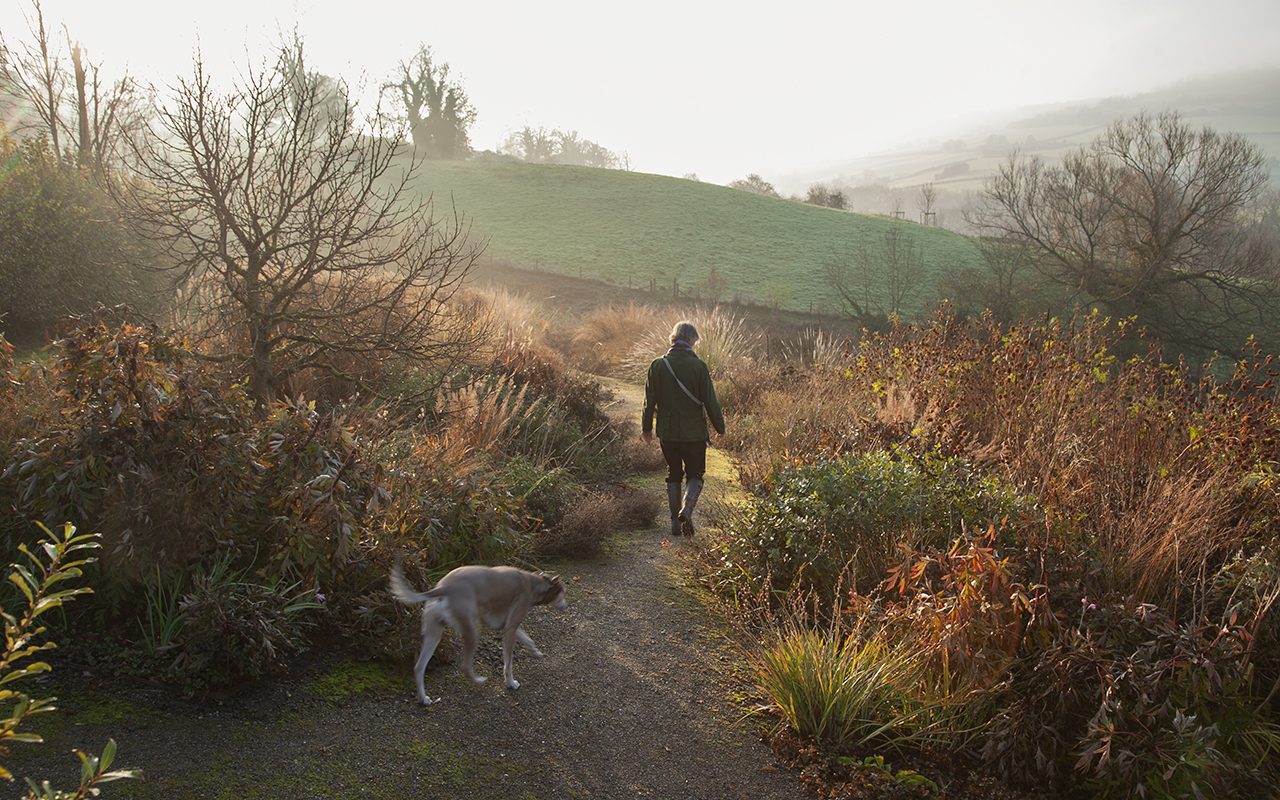 So here we are with the last few leaves on the branches, poised on the edge of winter. Now we can see through the wood that provides our backdrop, there is just the faintest undercurrent of gold where hazel and field maple have hung on in the shelter. The stream is full and racing. The ground charged from weeks of what is now beginning to feel like an endless rain.

The garden has been wonderful this last month and arguably as good it ever was at its flowering peak. There are just a handful of flowers left now that the frosts have had the Nerines. Paled by the cooling nights and their diminishing energy, the last of the Asters hum a last wave of violet and, though the Tricyrtis no longer have their poise and skyward facing vitality, they remain beautiful in their death throes.

The frost has been the gamechanger. It melted the fleshy nasturtiums and crumpled the Aralias, their lushness culled in a night of cell-splitting carnage. Not everything reacted in the same way, but the greens altered immediately, colouring or browning or simply dropping to leave no more than skeletons and seed heads. Euphorbia cornigera reacted with a show of good colour, saffron and amber replacing the previously acidic greens. The frost was the trigger too for the reds and oranges in the Panicums. First the tips of the foliage, then the vibrancy travelling quickly down the length of the leaf so that they appear to glow from within.

The last of the autumn reveals daily differences, now that the grasses have paled and taken centre stage. These light catchers reveal themselves in plumage where the Miscanthus catch the backlighting on the dry days, but the very same seed-heads close tight and darken on the wet days, foliage that glowed an apricot warmth darkening to cinnamon. The Miscanthus are sure to stand the challenge of the winter ahead, but the same cannot be said for the Molinias. Teetering on the edge of falling apart – for they never last well when the winter wet gets into them – this is one of their best moments. The plants around and amongst them are suspended in a backlit veil of the finest filaments. Verbena macdougallii ‘Lavender Spires’ with its very last tips still coloured and Vernonia arkansana ‘Mammuth’ standing tall and dark, its plush seed heads aglow.

In contrast to this new luminosity, as the garden ages a complimentary darkness asserts itself where seed heads have come to fruition. Black lines score the vertical to make the Veronicastrum visible once again. I used them for their white line in the summer and now love them for this opposite. Though they are over now that they are stripped back for winter, they are far from spent.

Digitalis ferruginea are one of the best black verticals as they stand for so long, but the Agastache nepetoides are taller still and candelabra-branched. Like lightning conductors, they stand taut and pure in outline. Green in summer, they too are now more visible for their poker black spires. Easy to raise from seed it is worth having a number in hand, as they can be short-lived, and so I planted more for next year last spring. In part this was to combat the mice, which slowly carried away the seed heads in the course of a week once they had discovered them. I expect this to be their downfall again as the weather cools and the seed becomes worth the steeplejack journey the mice must have to make to retrieve it.

I will not go into the planting now other than to remove the odd broken stem where it might create a little discord. Sometimes it does make a difference and keeps things feeling buoyant a little longer, but it is hard not to see the coming season as anything other than beautiful. Eryngium seed heads, sculptural and as good in death as in life, Sanguisorba, drained of summer colour, their lofty scatter of darkness thrown into relief by glowing grasses. A million shining stars in the Aster seed heads, reminding you of their namesake.

Walking the garden daily we have seen an increase in the number of birds skittering across the path or flurrying upwards from where they have been foraging for seed. It is a good time to look and plan adjustments whilst things are still standing. Or to simply look.