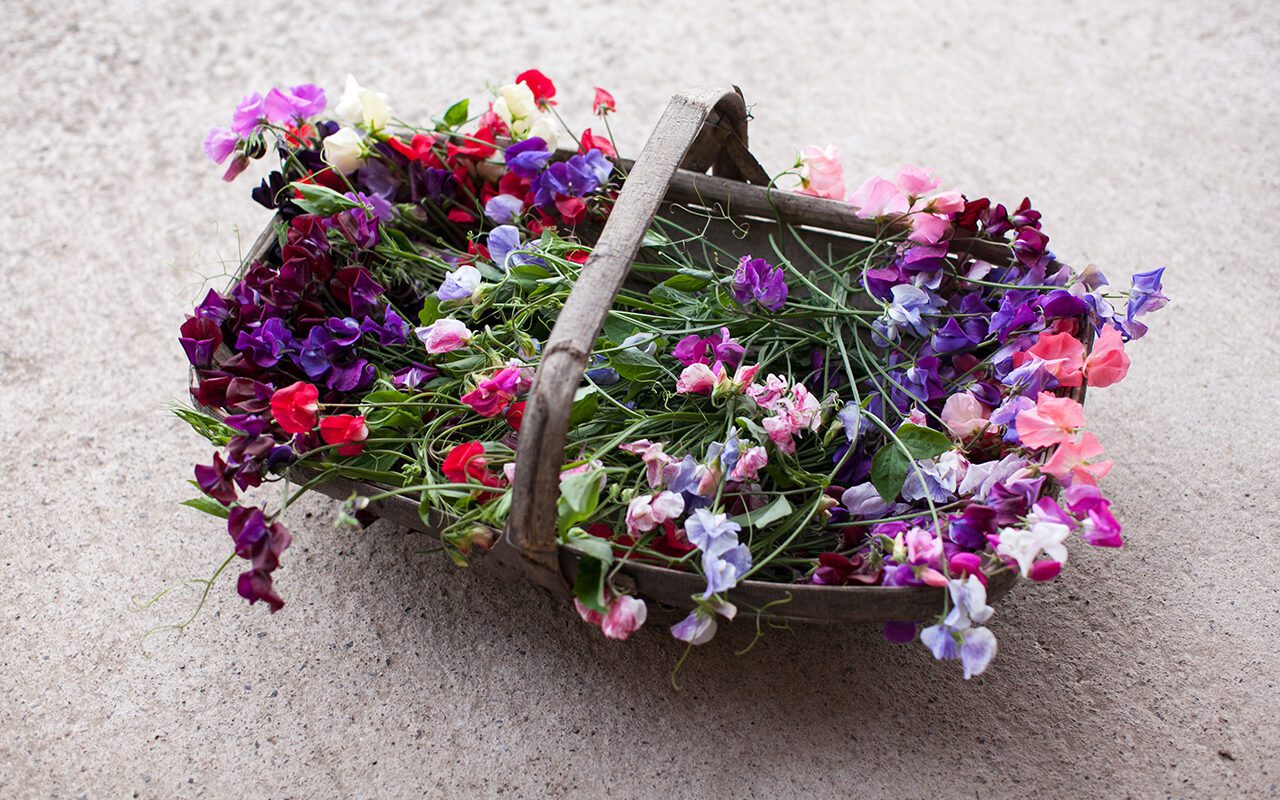 Nothing smells like early summer quite like a sweet pea. Fresh and intoxicating, innocent and sensual in equal measure. The scent of my grandparent’s garden, which wafted through the windows of my bedroom on hot summer nights in Swansea. The vines planted at the ends of the runner bean supports, which brought the sweet peas down to earth while exalting the beans. They were never cut for the house, just allowed free reign to scramble and scent the vegetable patch. Now that I grow my own the house is filled with their scent as long as I can keep up with picking them, although there is always a point in the summer where the stems get so short or you have better things to do (like bottling tomatoes, freezing soft fruit, making jams and chutneys) that it is finally better to leave them on the plant and allow them their natural decline.

This year, for the first time we got our sweet pea seeds sown early. Before the arrival of the polytunnel we had always waited until late March before sowing, but we got a head start this year and planted them in early-February. The seeds were soaked in cold water overnight, which is reputed to make them faster to germinate, although it is difficult to ascertain whether this is the case or not. Three seeds of each were sown in a 9cm pot with two pots of each variety and put into our unheated toolshed, which has the frost kept from it by virtue of also being where the boiler is located. When we posted news of the seed sowing on Instagram some queried why we weren’t using root trainers and, although it is true that all legumes tend to benefit from deep pots due to their searching root growth, we have never had an issue with pot-grown sweet peas, as long as you get them in the ground before they become pot-bound. That said we have been collecting the insides of our toilet rolls to use next year to see if it makes a difference.

As soon as the seeds started to germinate they went into the Milking Barn, where we have a dedicated propagation shelf set up in the picture window, which gets direct light for most of the day. A week after germination, to prevent them becoming etiolated, I would ferry them down to the polytunnel every morning to get as much light as possible, before bringing them back up to the heated barn every evening. By early March the polytunnel was warm enough to leave them in there overnight and soon they were large enough – with four sets of true leaves – to pinch out the tops, which encourages strong root growth and stockier plants.

Once the seedlings had reached a height of 15cm they were brought up to the cold frames by the barns and hardened off for a week before planting out. However, this was delayed by the prolonged frosts in late March and early April and so, when we did eventually get them in the ground in the second week of April, they were protected with fleece for a few days until the cold snap had passed. Sweet peas are hardier then they look and although one frost was hard enough to get through the fleece, despite their wilted appearance the plants recovered very quickly.

We have grown sweet peas every year since we moved here and have tried a wide range of varieties, but we always return to the Old Fashioneds and Grandifloras. These are the smaller flowered varieties, many of which are very old, and which have the strongest scent. They have a tendency to shorter stems, which means that they are not so popular with flower arrangers and florists, but I simply cut longer stems from the plants with leaves and tendrils intact. The Modern Grandiflora varieties were bred in the 20th century to provide the scent of the old varieties with the larger flowers and longer stem length of the more popular Spencer types, which have large, more ruffled flowers and long stems, but little scent. As with roses there seems little point in growing sweet peas unless they overpower with perfume.

I’ve tried several of the text book methods for prolonging the flowering season, including one year following the wisdom of the professionals and pinching out every single side shoot to encourage upward growth which, when it reaches the top of the hazel poles, is then trained down the neighbouring pole to double the height of the plant and, therefore, the number of flowers it produces. All very educational, but frankly life’s too short. Now I simply ensure that each time I pick a flower (and regular, daily, picking is the best way to ensure longevity) I snip out the side shoot that develops at its base, as the energy required for these prevents the main stem from reaching its full height and the flowers produced on them always have much shorter stems.

Each year we plant a range of colours and, although we have some stalwart favourites like ‘Cupani’, ‘Painted Lady’, ‘Almost Black’ and ‘Lord Nelson’, we always trial some new varieties. Here is this year’s selection.