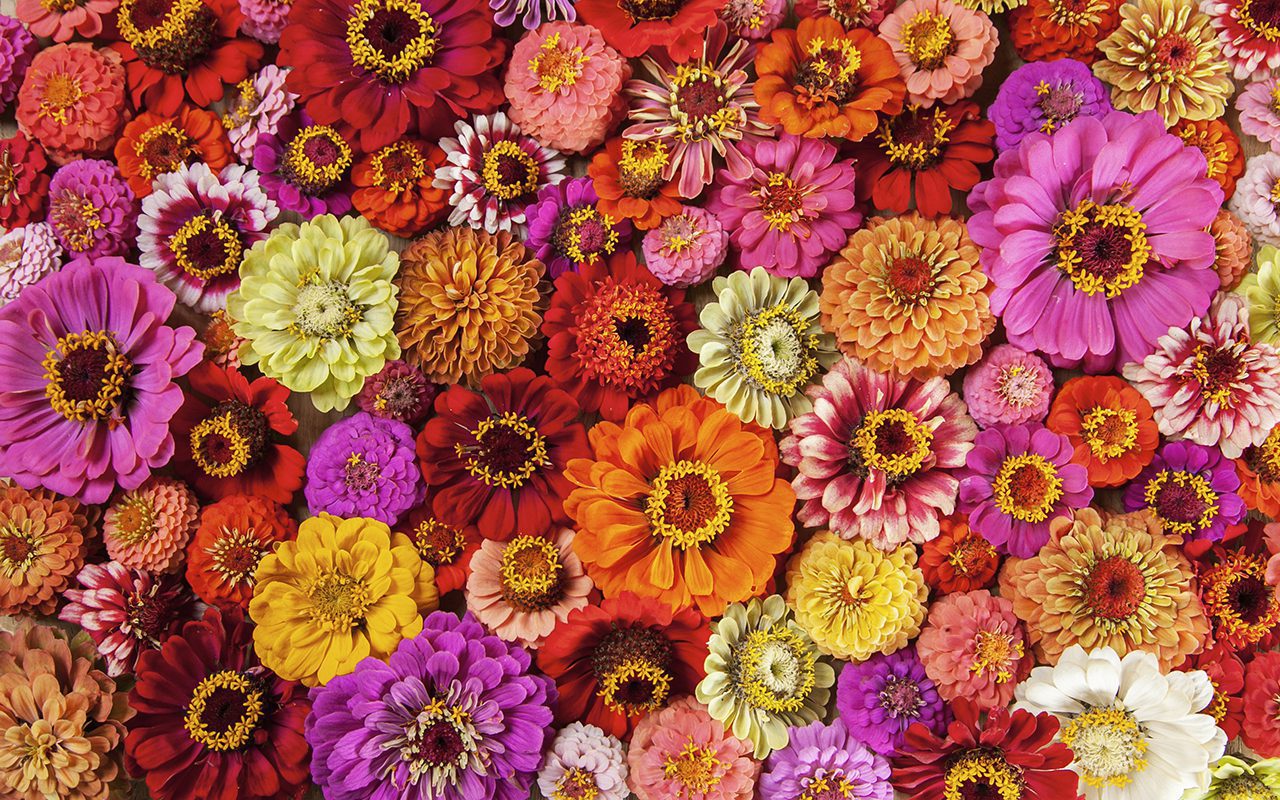 If you didn’t know and had to take an educated guess at where zinnias originate from then it is quite likely that Mexico would come near the top of the list. With their kaleidoscopic colours and searing vibrancy they speak of a hot climate and it is no surprise to discover that Frida Kahlo grew them in her garden at Casa Azul, the home she shared with Diego Rivera in Mexico City, where they honoured indigenous culture and planted only native species. Visitors at the time would recall the blood red zinnias that decorated the dining table and, if you look at the many self-portraits and photographic portraits of Kahlo, alongside dahlias, tagetes and bougainvillea, zinnias also feature in some of the dramatic floral headpieces that were her trademark.

Despite a love of colour, for many years I could not see the attraction in them. Their stiff habit, dry, papery petals and outlandish colours reminded me too strongly of the depressing vases of cloth flowers my grandmothers and great aunts had gathering dust on mantelpieces and windowsills when I was a child. In the past few years, though, I have begun to appreciate the shot of energy they bring at this time of the year, when many perennials in the garden are on the wane. Picked for the house, in combination their colours intensify and play off each other and, like a good firework display, provoke an instant rush of childlike joy.

Although zinnias are found both further north and south than Mexico, this is their natural centre of diversity. The majority of garden zinnias we grow today originate from Zinnia elegans, a branching annual of around a metre tall with single magenta flowers. In his fascinating account, A History of Zinnias: Flower for the Ages (2020), Eric Grissell relates that, although widely believed to have been grown since ancient times by the Aztecs for their folkloric and medicinal importance, there is no recorded historic evidence of this, as there is for dahlias and tagetes. Equally, the history of their hybridisation and introduction into European gardens is something of a mystery. Although it is presumed that seed was brought back to Spain by the conquistadors and then disseminated from there across Europe and beyond, when and where hybridisation took place is unknown. Two other species played a part in the creation of the garden plants we know today, Z. angustifolia and Z. haageana and, at some point in the late 19th century, a range of hybrids including tall varieties and those with fully double flowers, were imported to Europe and back to the Americas from India. Their cheerful colours, tolerance of heat and drought, indestructible appearance and well-suitedness to cutting, quickly led to them becoming hugely popular and a mainstay of Victorian bedding schemes on both sides of the Atlantic.

Over the past few years I have been trialling a number of different varieties in the cutting area down by the polytunnel where, growing alongside sunflowers, dahlias, orange cosmos, tithonia and coreopsis they look right at home. Like all of their companions here zinnias really need heat to thrive so, like their South American vegetable counterparts, squash, sweetcorn, beans and courgettes, they are best sown late in April or May to avoid the seedlings being checked by cooler weather. Zinnias have a reputation for being resentful of root disturbance and are recommended to be sown where you want them to flower, sowing several seeds per station and then thinning to the strongest seedling. This also gives you two sacrificial plants should the slugs and snails get the better of you. However, I have always sown in small plugs and have not had any problems with transplants, although it is important to get the timing right and not transplant to soon when the roots are most at risk of damage or too late, when they are rootbound. Around the time that they make their first set of true leaves is about right. I have found zinnias very easy to germinate and grow on and despite advice to stake them have found that, if planted close enough together in a block (between 30-50cm apart depending on type and final size), they are reliably self-supporting. If combining in a mixed planting I would follow the advice and stake them lightly.

Having at first thought that there were certain zinnias I would find it hard to love, I now see that each has its own merits. In much the same way as with dahlias it is the variety, exuberance and structure of the flowers which wins over any doubts you may have based on good taste. However, the single and semi-double varieties are hugely attractive to butterflies (and, in their home country, hummingbirds), so I prefer to favour these for the pollinators. Coming in every pure pigment shade from neon orange, through vermilion, saffron, coral, puce, fuchsia, lime green, chrome yellow and white, with flowers large, medium and small, single, semi-double and double and in stature from 30 to 90cm, there is a zinnia for every situation. They provide fascination at every stage of growth towards flowering, with tessellated, scaled flower buds that open geometrically to reveal rolled petals that gradually unfurl, one layer after another in a slow motion movement that put me in mind of the formation swimmers in an Esther Williams movie.

As roses withered and sweet peas mildewed in the heat last week, the zinnias, which it must be said had been dawdling a little up to that point, finally hit their stride, visibly putting on growth as the temperature rose. Great for cutting, there a few tips to follow to avoid disappointment. The stems of zinnias are hollow and bend easily just below the flower, so hold the stem lightly well below the flower to cut. You can cut the stems to the base and the plants will reshoot. Remove all foliage and side shoots and immediately plunge into a container of cold water. Cut when too young and they wilt without opening, too old and they quickly fade. The timing is right when the flowering stem feels stiff when lightly shaken. Due to their vulnerability they are best arranged alone, as it can be tricky getting them into a mixed vase without damage, but a grouping of vases with dahlias, zinnias and tagetes together provides an injection of Mexican energy that will carry us through the rest of the summer. As long as you keep deadheading them, whether in the garden, in a vase or in a headpiece they will keep on providing explosions of colour from now until the real fireworks light up the sky in early November.