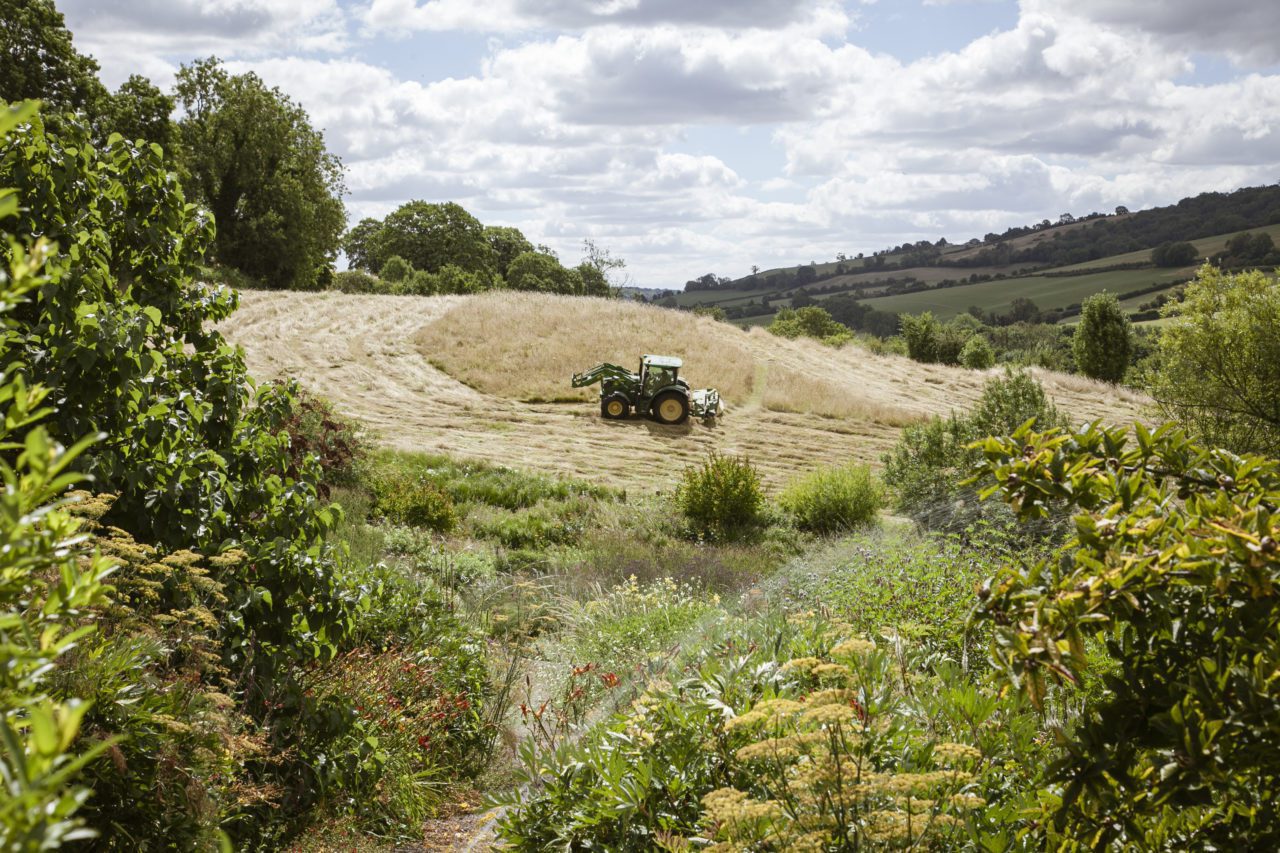 The farmer who cuts our hay for us in exchange for the grazing is usually ready and waiting on or around July the 15th. Of course, the date is weather dependent, but it is fixed for a good reason. There is still energy in the meadows as they have not yet run completely to seed and the hay is still nutritious. Importantly for us, the annual Yellow Rattle (Rhinanthus minor), which we introduced to help curb the vigour of the grasses has had a chance to seed. The saying goes “When the rattle rattles, it is time to make hay”. And sure enough, when our feet rustle amongst the bladder shaped seedpods, we know the meadows have not much time left for standing.

This year the meadows were cut a whole three weeks later than usual, because the bailer went up in smoke in the week of the last heatwave. We let out a gentle sigh of relief, because the eerie silence that descends after the hay is harvested is always disquieting. All that habitat swept up over two fast days. First the cut with the hay left to dry in the sun, then the windrowing later in the day to gather it into a giant’s corduroy for easy baling, The next day the dusty commotion of the bailer and, if he can, the farmer collects the same day so all is done and silent by the second evening.

We never cut the whole meadow, leaving a strip around the edges and by necessity the steepest slopes of The Tump that descend to the brook and are impossible for the machinery to negotiate. The rough grass is eaten down by the sheep which come in to graze once the fields return to green, but they never nibble it back hard, so it acts as a sanctuary for all the life that favour this tussockland and suddenly have their habitat removed for the remainder of the summer.

Immediately behind the house we have an even steeper field, which the farmers won’t venture into, but which is cut by an intrepid contractor who comes in once a year in the second half of August. These steep meadows are where we have started to get a proliferation of orchids, which do not completely set their seed until the middle of August. The late cut allows us the opportunity of walking amongst the flurry of Meadow Brown butterflies and crickets and, once dusk descends, the moth life. Late-flowering knapweeds, carrot and field scabious also flower well into the later cut to continue the pollen and nectar harvest for the insects.

The all-important Yellow Rattle has been essential in diminishing the vigour of the grasses in the cut meadows. It is semi-parasitic upon them, which weakens them and opens a window in the sward for a greater diversity of species to germinate. Both wildflowers and local grasses, which over many years were diminished from overgrazing by the cattle that were kept here. The annual rattle was present in a local seed mix harvested from neighbouring St. Catherine’s Valley with which we over-sowed the meadow fields in October ten years ago. We have further reduced the vigour of the old pasture by cutting and collecting, so that every year an enormous volume of biomass is removed rather than being returned, as in the year-round grazing regime that existed here before.

By returning the meadows to an older system of management we have seen an incremental difference year on year with more diversity and a finer grain in the weave of wild plants. Fairy Flax, Pale Flax, the exquisite Brome grasses and the movements of species as they find their niche in the meadow. The thuggish grasses have loosened their hold and, for the first time this year, the lower slopes of our far fields (called Upper & Lower Tyning) were brush harvested for Yellow Rattle by our neighbours who own Emorsgate Seeds. They gave us the seed we oversowed with originally and at the time jested that one day they would return for the rattle. S­ure enough, as one good turn deserves another, a decade later we were able to contribute in a very small way to their harvest and received a sack full of the proceeds as the result. 25kg of what felt like liquid gold, as the seed slipped easily into buckets.

Walking into the silent meadow this week, brown and dusty after the hay cut, is always a bittersweet moment. In Britain we have lost 97% of our meadows in the last eighty years, so it feels entirely good to be managing around fifteen acres back from pasture to meadow. Learning how to do it is a slow and patient process. This year the cyclical and self-contained act of over-sowing with our own seed onto the areas we have been watching that need further improvement is extremely rewarding. One of hope and futures, where we have a sense of being part of something that has meaning and momentum.

The silenced meadows make us suddenly more aware of the thrum of life in the garden. The newly shorn backdrop of The Tump throws into perspective the richness of forage that the garden plants now provide by extending the season. Towering echinops and their interweaving traffic of bumble, honey and other bees we have not yet memorised. The audible drone in the sea hollies, lavender and calamint. The butterflies; Peacock, Comma, Small Tortoiseshell, Brimstone, Painted Lady, Marbled White, Small Blue. Wasps great and small hovering over the yellow landing pads of the fennel. And then at dusk, the moths. Hummingbird Hawk moths on the salvias and later, on a still night, the air alive with fluttering activity, their countless movements making the garden their own, with us as visitors. Their boundaries are not hard and fast – native, non-native – and it is good to see our actions working in their favour.