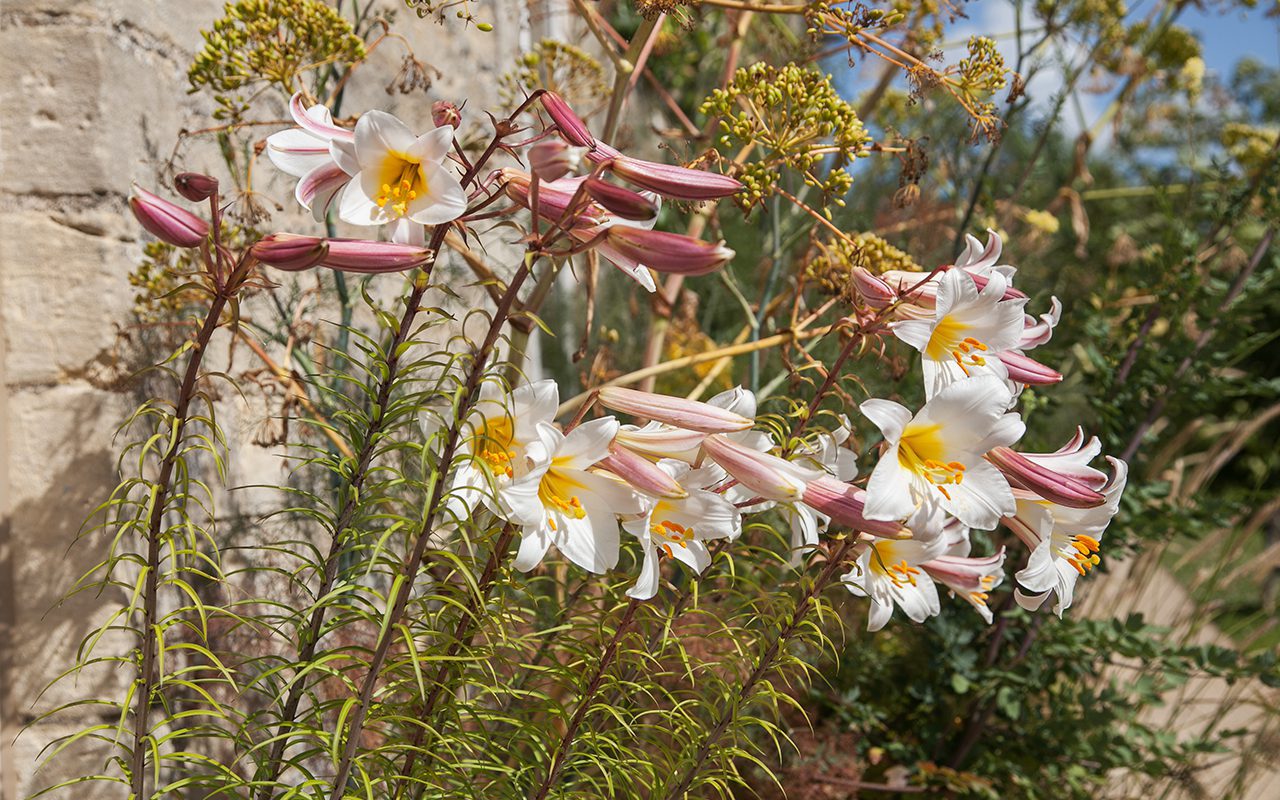 The first half of summer would not be the same without Lilium regale. Sitting dormant over the winter in pots up by the cold frame, it is always hard to resist a rummage when the promise of their awakening is in the air. I have been stung more than once by such impatience, damaging a new shoot before it has fully broken ground and ruining all the energy stored carefully in the bulb from the year before. Patience learned the hard way sees me waiting now to check the number of stems once they have broken ground, the coppery growth which at first looks not unlike a sea anemone and comes with such promise.

Over the course of the spring, the stems rise up fast, tilting towards the sun as they grow and festooned along their length in foliage. The buds, which were formed last year and are carried in the growing tip, are held protected in the ruff of foliage until late in May when another moment of restraint is needed not to part it to count this year’s buds. Behaviours I learned as a boy when I fell under their spell, for my father grew two oak tubs of the Regal lily opposite the front door on the drive. I can still remember their charge and expectation and it is every bit as good today as the buds begin to swell and make their presence felt in the run up to the longest day of the year.

As you learn about their best cultivation, this is the time to make sure they are well watered with a seaweed feed which helps ready them for flowering. I bring the pots down to the front of the house at this point to enjoy the final rush towards flower. The stems reaching their full height before the buds tilt and begin to elongate. A little staking might be necessary in a good year to avoid the lilies arching to the ground under their weight of flower. And then, usually just before or around about the longest day of the year, the first split of waxy bud. A plum stained reverse and trumpets opening to reveal a pure white centre stained at the base with gold.

I can only imagine what it must be like to see Lilium regale flowering in Southern China where they lean out from steep gorges and scent the air with their heavy perfume. Ernest Wilson, the great plant collector, nearly lost his life on an expedition especially mounted to import them in the early 1900’s and tales of the avalanche that broke his leg and nearly did for him must have made this discovery that much more exotic when the lilies first became available.

Since its introduction the Regal lily has proven itself to be dependable and bulbs are cheap to buy and disease free. Untroubled by virus, which is the blight of the Madonna lilies, and not particular to their setting, for they are easy in a free-draining position with sunshine in their upper parts and a cool root run. The dreaded lily beetle is their nemesis and this is why I now no longer grow them in the ground. The grubs are easy to remove when you find them on the undersides of the foliage and the pots can be moved to just where you need them to perfume the midsummer air. After they have flowered I will cut the seedpods to allow them to feed the bulbs and not put energy into seed and return them to a sunny corner up by the frames to live the summer out in preparation for the next longest day of glory.