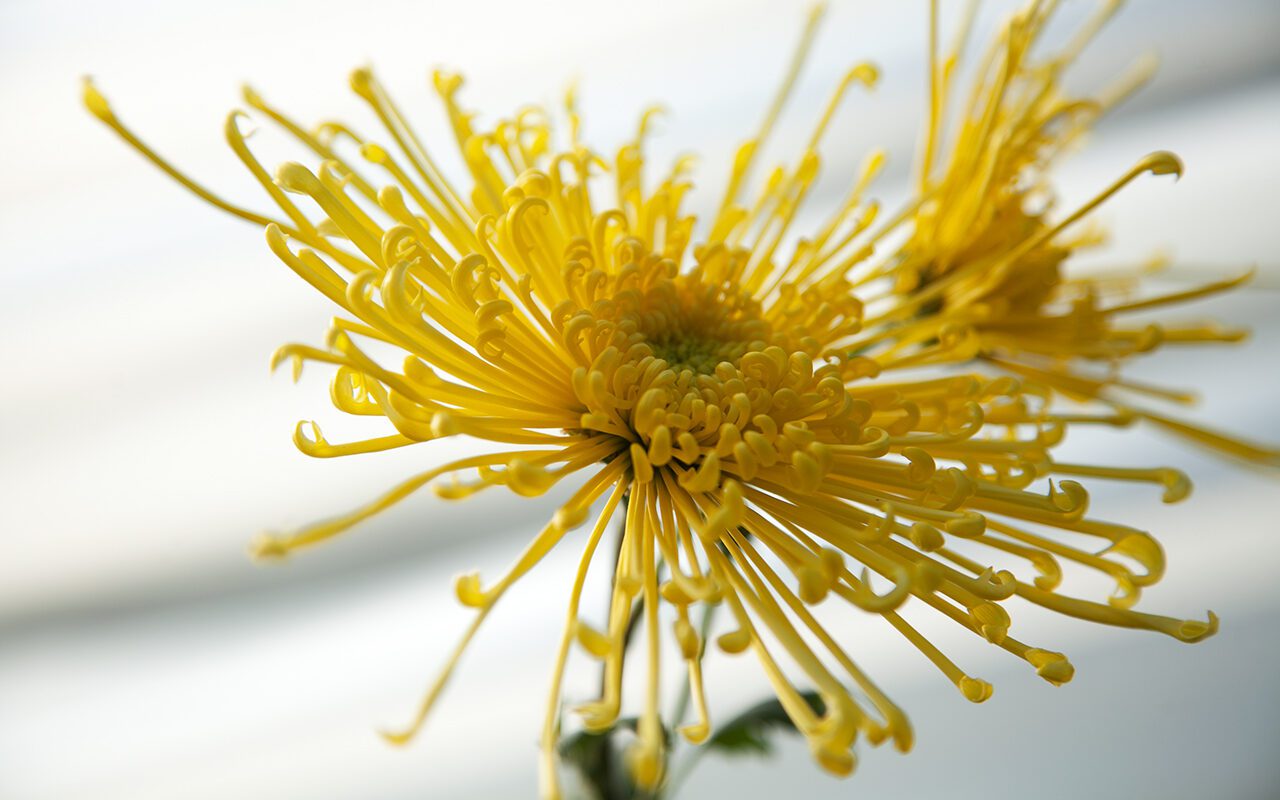 The gales have torn at the last of the autumn colour, the rain is with us again with apparently no let-up, but open the door to the polytunnel and you enter a world that is stilled. Immediately calmed and weather-protected. The drum of the storm amplified yet distanced.

This is a place we are getting to know and learning about through growing. Ordered in the first lockdown and erected just before we came out of it at the end of May, the summer’s crop of tomatoes, cucumbers, basil and chillis is now replaced by winter salad. Hunkering down in an environment that takes more than the edge off the winter, we can already see the benefits in the enabled growth. The complement to the hardy winter vegetables in the kitchen garden.

The polytunnel is also providing sanctuary for another crop we are growing to keep us buoyant as the evenings lengthen and the growing season retreats for good. Brought inside at the beginning of October to escape the elements, the spider chrysanthemums are at their very best and, indeed, most vulnerable as the weather turns. Though I grew them successfully for a couple of years in the microclimate of our London garden, last year’s attempt at growing them outside here ended in tears. Months of care and promise were destroyed by November frosts, the very first flowers left in ruins and buds blackened beyond hope.

Not to be daunted, an order was placed with Halls of Heddon last year without a specific plan for their autumn protection. Such is the way with failure in a garden, it often spurs you on to succeed. The rooted cuttings arrived in the spring, this year with the promise of the polytunnel as an autumn retreat, so they were potted on and placed in the lea of the barns up in my growing area. Here, they received morning light – the four to six hours they need to set flower – and then afternoon shade. They were carefully staked and given not much more attention than a regular liquid feed to help flower production.

I confess to preferring plants that one can nurture towards independence to those that are reliant on human intervention, but the chrysanthemum festivals in Japan are enough to subvert my self-imposed rules. Once the leaves are down on the fiercely coloured maples and twiggery presents itself again to grey skies, they take a special place in the descent into winter. Grown often just one flower to a stem, displayed on a plinth and often against a dark backdrop, the blooms are naturally likened to fireworks.

My plants this year have, by contrast, been neglected. They were not pinched out to promote appropriately spaced branching, nor dis-budded to select a number that can put all their energy into flower. They have had the minimum of care. A chrysanthemum grower would say mistreatment. But here they are, in the shelter of the polytunnel, coming into their ethereal own as the rest of the world outside begins its slumber.