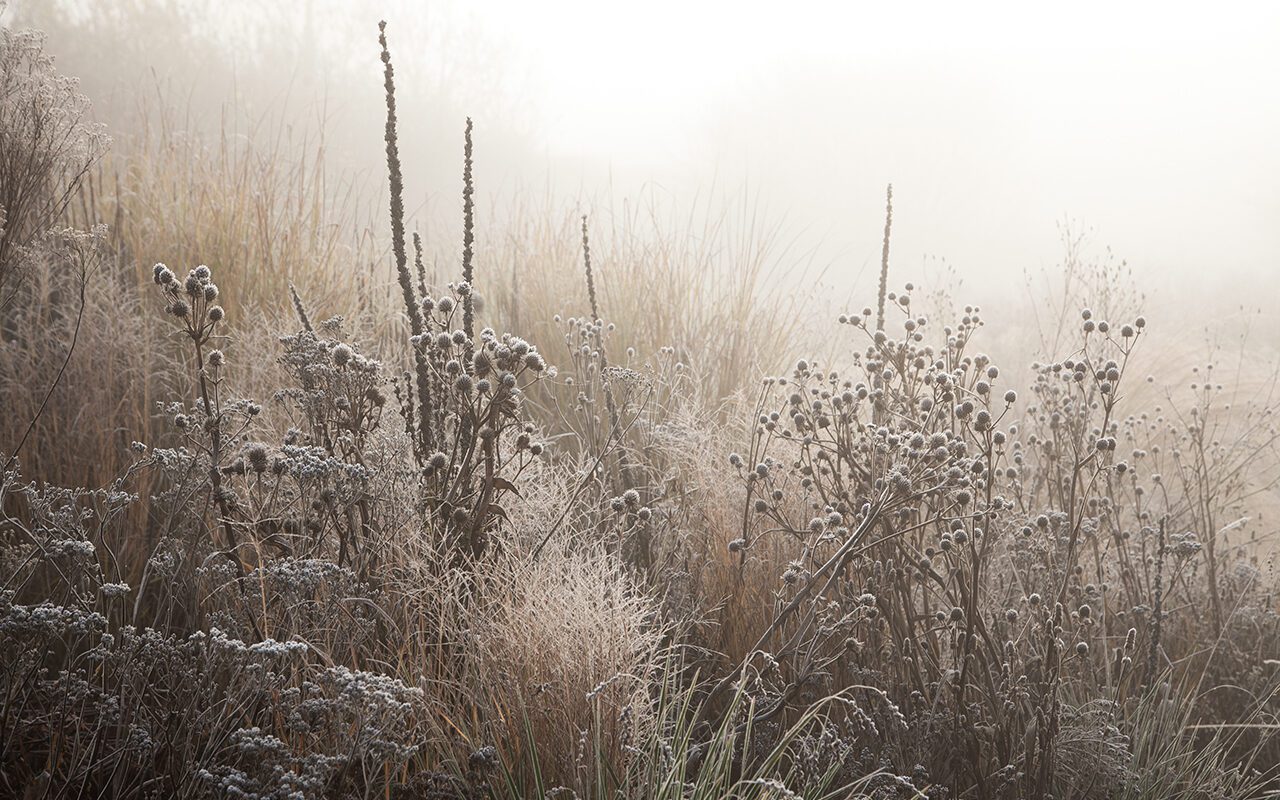 On Thursday this week the temperatures plummeted and, with torch in hand, I spent an hour before bedtime throwing fleece over the tender plants that hadn’t quite made it to their winter quarters. The old brugmansia that has lived through the last twenty five years of seasonal upheavals, the uprooted dahlias waiting in the barn to be potted up for storage in the toolshed and the pelargoniums on the veranda that were brought together in a huddle earlier in the month. A few last days in the open air before they have to come indoors.

It was an hour well spent and, sure enough, the next morning a proper frost lapped white to the very walls of the house. The following day was as clear and as beautiful as any day could be in the very last moments of autumn. Light poured luminously into a garden united by the freeze, the colour of spent stems and withered foliage sitting under the silver, knocked back but still in evidence. The open skies remained clear and late after supper, we ventured out with hats and a torch to look at the garden as the freeze came in again. Spangled and glistening and still.

First frosts always feel cleansing. They finish one thing and begin the next. Last leaves dropping in the thaw the next day and trees newly naked. Views again through the woods, the ferns shining on the floor, no longer in shadow but revealed by first winter sunshine. A frost opens a window for winter work. With the fruits ‘bletted’ by the freeze, berries are eaten fast in the hedgerows. Roesehips first, the shiny black privet hanging on a while yet. When we can see the cycle is complete, it is time to cut the hedges that mark the tended places close to the buildings and provide the contrast to the rough wild hedges that run away darkly and on into the valley.

The link between garden and the beyond landscape is deliberately mutable and I prefer to tread lightly now and to only act where it is really needed to keep in time with the landscape. The garden is left now to fall away and reveal itself in its skeletal form. Leaves allowed to fall to earth and become a protective eiderdown, pulled under eventually by the earthworms when the time is right. The joy then in the winter forms, some of which are here just for a while in our West country wetness which will topple the molinias by the end of December. Those with the stamina to stand a little longer will reveal the life that is still occupying the garden. A lattice-work of interconnected cobwebs and seed that is slowly stripped by the flit and flurry of birds.

This year the bolt uptight pokers of the Agastache nepetoides have already been dismantled by what we imagine must be field mice. We have not seen them doing it, but it is quite a feat of agility, running the lofty mast to the bounty at the top, cleanly decapitating the seedheads and then taking them back down to earth. Do they throw them from the top, I wonder, or carefully carry? We have never found the evidence.

The feeling of stepping back in order to look ahead feels right just now. Letting the occupants of the garden partake where they need to and only applying our energies strategically. The beginning of the winter work has started. This year the cutting dahlias have been lifted rather than left in the ground to make way for tulips and a change, but the species dahlias are left in the ground to tough it out with a little protection. A bucket of compost heaped over their crowns now that their tops are blackened will see them through. The same goes for the tender Salvia patens, which also has a tuberous root and the potential to be completely perennial given a little help. Slowly, planning the weeks ahead before it all starts again, we will pace ourselves. Emptying the compost heaps, planting trees and hedges and beginning the first of the coppicing. New weeks, stripped back by a landscape resting and the chapter unfolding ahead of us.