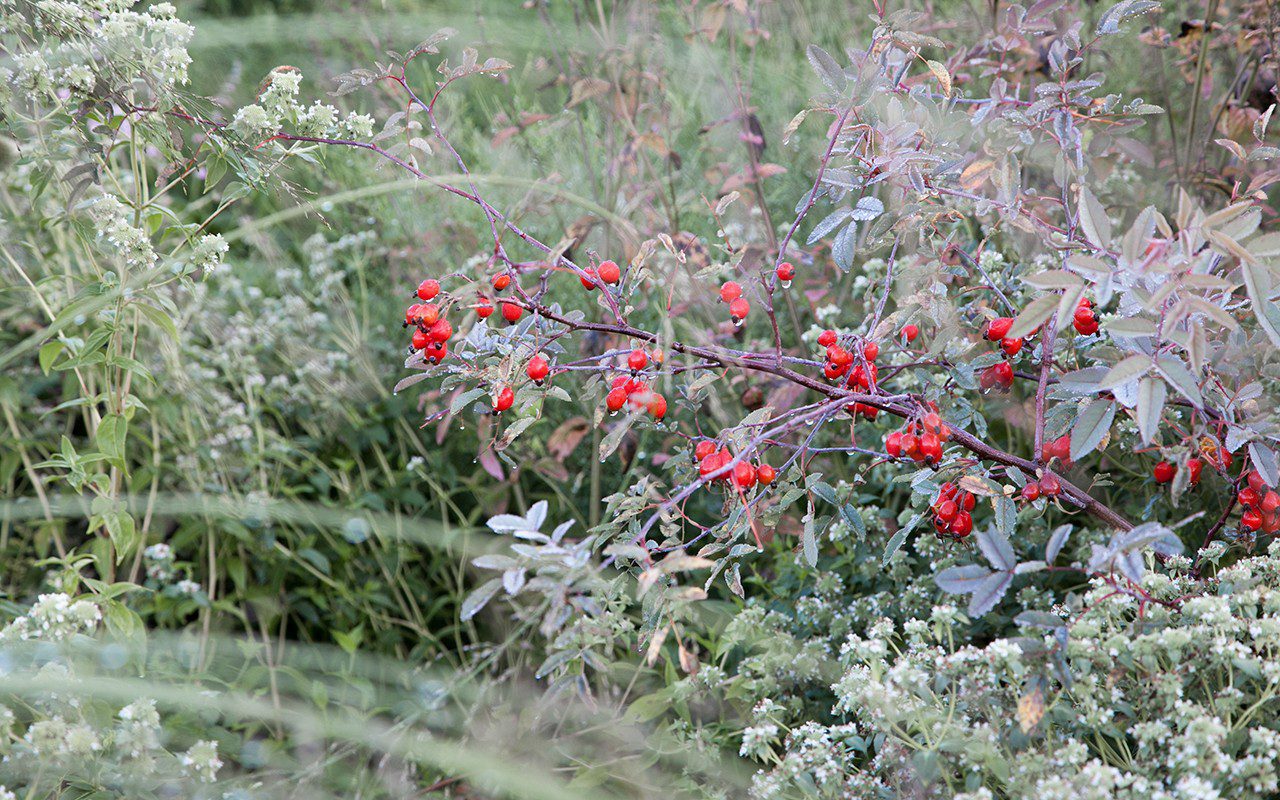 As September light casts its autumnal influence, the hips have lit up the hedges. Though it would be easier to get on the land to cut the hedges whilst it is still dry, we choose to wait until February in order to preserve their bounty. The birds work the heavy trusses of elder first, then move onto the wild privet before starting on the rosehips. Their fruits are still taut and shiny and it will be a while yet before they start to wrinkle and soften to something more palatable. If you are quick enough to get there before the birds, this is the perfect time to harvest them, the hips coming away easily to sticky your hands and stain fingertips scarlet.

Although I planted a couple of dozen eglantine whips (Rosa rubiginosa) to gap up the hedges when we arrived, I raised a batch of seedlings from the first hips they bore. An autumn sowing spawned more seedlings than I could deal with after the winter chill they need to break dormancy. I potted up a hundred seedlings and grew them on for a summer so that, a year after sowing, they were ready for planting out. Two years in pots (with potting on) would have made them stronger and probably more resilient to the fierce competition of being out in the wild, but the seedlings that did make it through are now doing handsomely. The eglantine seedlings were planted widely, so that their perfumed foliage accompanies us on the walks we make over the land. They appear close to the gates and the stiles in the hedges, so that their apple-y perfume catches you unexpectedly and where they break free into the meadows. Six years after sowing, the best plants are now as tall as I am and weighted with fruit. Where we have deer down in the hollow above the brook, they have been left completely alone where other plants have been grazed, so I have also started to use them around the garden and as perfumed hedges in the hope that their scented foliage acts as a deterrent. Deer love roses as a rule, but dislike perfumed foliage, so the eglantines may be prove to be as useful as they are beautiful. We have several forms of Rosa spinosissima now throughout the garden, but my favourite are the plants I raised from those I found in the sand dunes of Oxwich Bay on the Gower Peninsula. Growing to not much more than a foot, which is small for a Scots briar, the plants were growing sparsely and in pure sand amongst bloody cranesbill and sea holly. Their flowers had long gone, as it was late summer, but the round fruits were black and shiny. I gathered a couple and the resulting seedlings were set out two years ago now in an exposed position on our rubbly drive. Though the plants are heartier, growing to twenty four inches to date in our easier growing conditions, I am pleased to see they have retained their diminutive presence.  We will see over time if they form thickets to the exclusion of the violets and crocus I’ve paired them with, as the briar is prone to move and colonise ground by runners. The creamy cupped flowers run up the vertical stems in early May, but the inky hips have been good since mid-summer and are only just this week starting to wrinkle and lose their gloss. Though young and not yet expressing their stature in the garden, the Rosa glauca (main image) are sporting their first hips this year. The single flowers, which are small but always delightful, come on the previous year’s wood, so I will be making sure to always have some old wood for fruit. This is a foliage rose first and foremost and some books recommend coppicing every two to three years to encourage the best smoky-grey leaves, which are a perfect foil to the hips. I prefer to prune a third of the eldest limbs to the base at the end of winter to retain wood that will flower and fruit the following year. Ripening early for rosehips, they are bright and luminous, aging from scarlet to mahogany, and are some of the first to be stripped by the birds. The young Rosa moyesii on the banks behind the house are also showing good hips for the first time this year. These scarlet dog-roses are good amongst the cow parsley and meadow grasses that spill from the hedgerows in June, but their flagon-shaped hips are arguably their best asset, making this rose easily identifiable when fruiting. With arching growth and fine apple-green foliage, I will let the shrubs run to full height, which may well be ten foot or so if they decide that they like the position I have given them. They have room here on the banks and this is the best way to appreciate them, from every angle and with the yellowing autumn sun in their limbs.