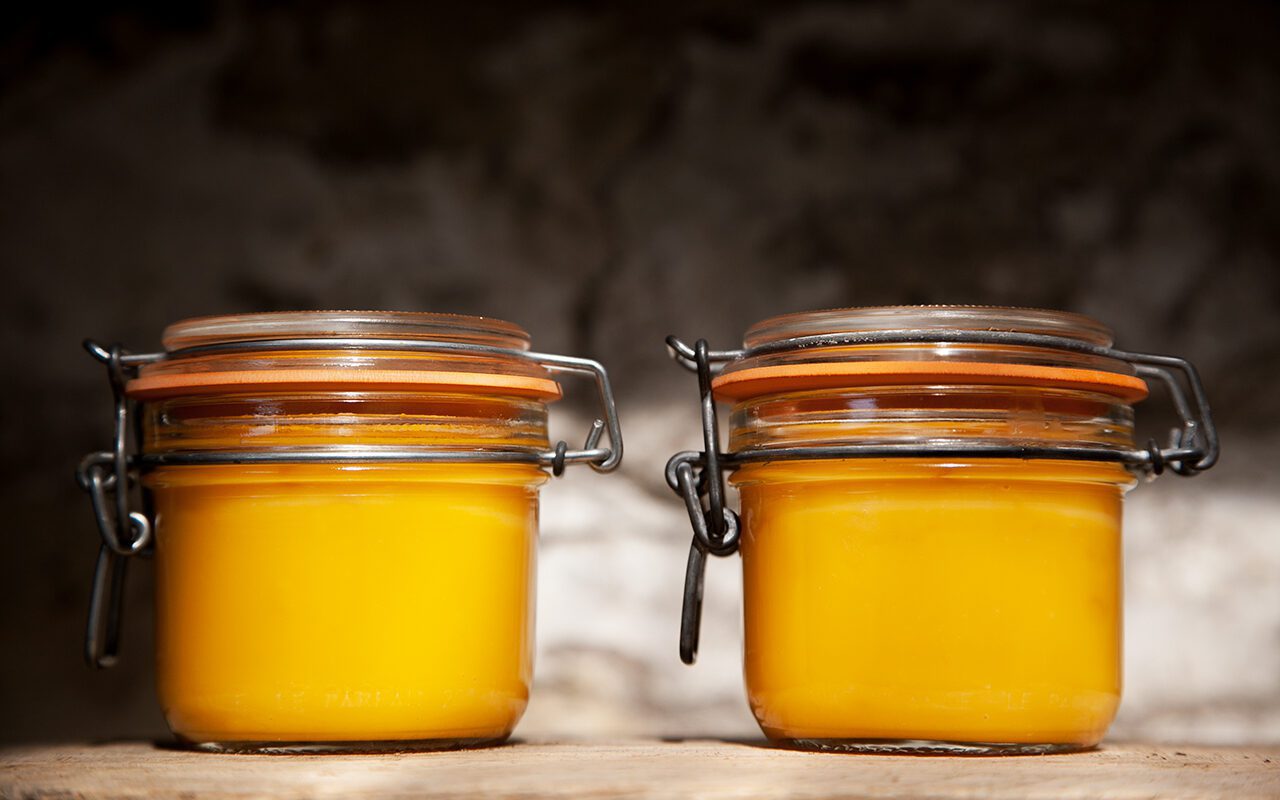 We put the terracotta forcers over the crowns of ‘Timperley Early’ at the end of January and over the variety named ‘Champagne’ at the end of March, although it probably should have been a little earlier. Despite the fact that the ‘Timperley Early’ would have been good weeks ago, there has a lot been going on in life and we just haven’t had time to pick it. The stems and emerging foliage of both have now pushed the lids off the forcers and exposure to light has been threatening to undo all of the good that forcing does for vibrancy of colour and flavour. Consequently, we have a rhubarb glut and, with plenty already cooked and in the freezer, part of my recipe challenge for this week was to answer the repeating question, ‘So, what else can you do with rhubarb?’.

When I scrolled past a mouthwatering image of Diana Henry’s Luscious Lemon Bars (thickened lemon curd on a shortcake base) on Instagram last week I thought they would adapt well to the sourness of rhubarb and so compared a number of different recipes to get a feel for proportions before alighting on one which sounded simple, foolproof and delicious. I made a couple of adjustments, substituting ground almonds for some flour in the shortbread base and replaced the flour in the custard topping with cornflour. All of the other ingredients, proportions and cooking method were as per the original recipe.

On Thursday, in between ferrying aubergines, peppers and chillis to the polytunnel, watering everything in pots, and doing anything requiring the pair of hands that we’ve been missing after Dan’s hand surgery last week, I managed to get a tray of these luscious rhubarb bars into the oven. Except that is not what came out. Through the mysterious alchemy and chemistry of cooking what emerged was something completely different. A layer of buttery, crumble topping above a firm custard with a thin layer of jammy rhubarb in the middle. Though delicious they were not what I had imagined and clearly needed more work to produce what I had in mind.

In the knowledge that cooking, photographing and writing a recipe in one day is already quite a tall order, I had to come up with another rhubarb recipe overnight. I thought, ‘Keep it simple.’ and stuck with rhubarb curd instead. No baking, just measuring and stirring.

After consulting books and websites I decided to adapt a familiar recipe I have cooked many times, substituting rhubarb juice for orange in Sam & Sam Clark’s curd recipe for Seville orange tart.

I finally settled down to cooking in the late morning and immediately the contemplative focus of cooking calmed my busy mind. The simplicity of just four ingredients and one pan. The repetition and order of cracking and separating eggs, cutting butter into cubes, weighing out sugar and measuring rhubarb juice. And then the close attention required to cook it carefully to ensure that the eggs don’t curdle.

It took over half an hour for the curd to start to thicken over the lowest heat possible and as, I stood there in the warmth of the range intently stirring, completely focussed on the activity before me, my mind went into the entranced meditative freefall that cooking shares with gardening.

*The rhubarb juice in this recipe is a by-product of rhubarb poached to go into the freezer. Around 500g of rhubarb should give you enough juice for this recipe. Cut the rhubarb into short lengths. Put them into a non-reactive pan with a tight-fitting lid and put in a medium oven (about 160°C) for around half an hour until soft. Strain off most of juice. Keep in the fridge and use in place of lemon juice or vinegar. It is particularly good in spring salad dressings.

Lightly beat the egg yolks, eggs and sugar together in a medium pan. Add the rhubarb juice and butter.

Put the pan over a very low heat and stir continuously until the butter melts and the mixture starts to emulsify and becomes glossy and thick. Do not be tempted to turn up the heat or it will curdle. Once it attains the consistency of custard pour into warm, dry, sterilised jars. Seal, leave to cool and then refrigerate. Keeps in the fridge for up to two weeks.

The flavour of rhubarb is delicate, so don’t be tempted to add other flavourings to this curd or they will overwhelm it.

Delicious on warm scones, mixed with poached rhubarb and whipped cream or as a filling for a tart base.