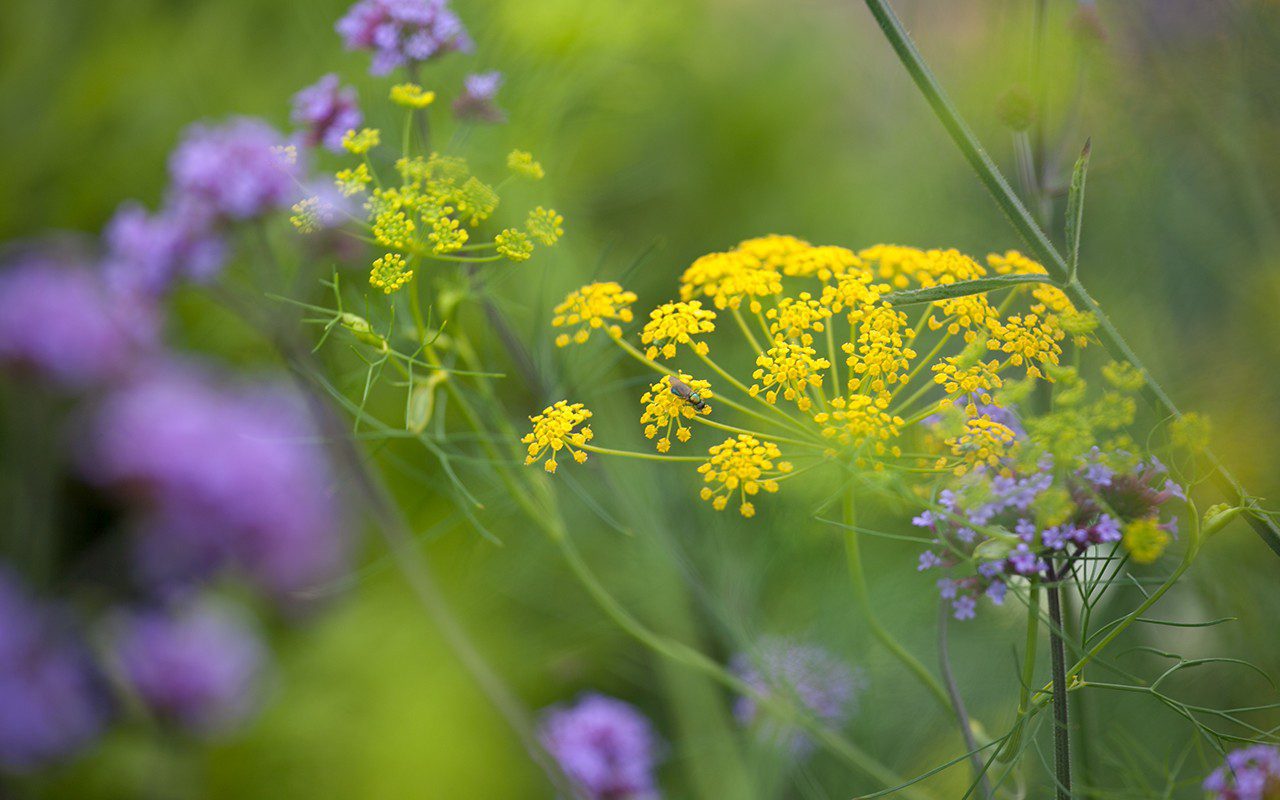 The herb garden lies between the house and the water troughs which screen and divide off the kitchen garden beyond. Its formation was part of last summer’s push to get the ground around the house squared up after the building works and in use again as a garden. The flat ground here was something we had dearly needed and it has made an enormous difference in how we negotiate the areas immediately around the house because, although the slopes provide their drama, it is so much easier to get around and to look when you don’t have to concentrate on your feet.

This garden is all about looking and I wanted the planting to hold your eye before it naturally travelled on and up the valley. It was the last area to be planted this spring, in part because I had inadvertently introduced horsetail when bringing up topsoil from further down in the field. I did not want a single trace of the horsetail in the garden and was happy to take the time over winter to track its growth back to the tiny slivers of black wiry root that were going to set it off in a new position if it wasn’t dealt with. The ground had also become compacted with the tracking of the diggers and I needed it to be free draining so that the herbs would be happy and not lie wet in our West Country winters. This required waiting until March to dig the ground over and introduce some sharp sand and grit.

The extra care that went into preparing the soil meant that the garden was not planted until the middle of April. Lavender, verbena, salvias, a cut-leaved fig and a willow-leaved bay laurel were planted small, with plenty of space so that the air could circulate and for the plants to have the opportunity to bake against the gravel mulch. The space between the plants will close over in the next year or so, but in the meantime I have inter-sown the gaps with a smattering of annuals to give the new planting a lived-in feeling in this prominent position. 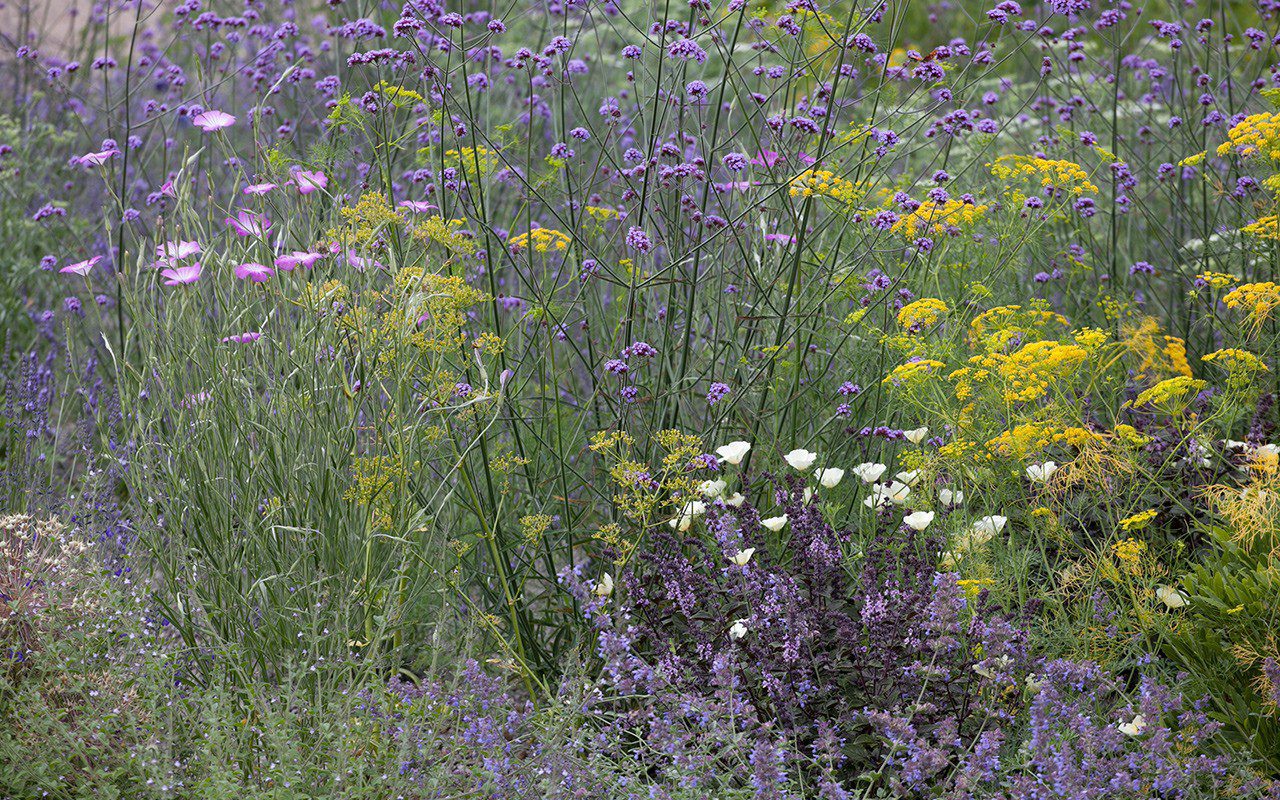 Part of the new herb garden planting with Agrostemma, Eschscholzia and Ridolfia

The opportunistic nature of annuals is something that I enjoy, particularly when they find their way by self-seeding and letting you know, sometimes a little too eagerly, that they like you. I am going to have to watch that here, because the majority of the herbs will hate to be overshadowed, their Mediterranean heritage not liking the damp that comes with close company or the lack of sunlight. So the annuals here may well be short-term and I will diminish the impact of their seeding by pulling them before they drop.

All of this year’s additions were sown direct from seed, a pinch to each planting station that was marked carefully with a cane so that the youngsters wouldn’t be trampled or mistakenly pulled when weeding. Seed is one of the most economical ways of introducing plants into the garden, but sowing is all in the timing. Sow too late with poppies, for instance, and unless we have a damp summer you will lose the energy of the spring and the bulking up they need to send flower soaring when the weather warms. But some are more adaptable and a succession of sowing can mean that, like salad, you have a relay as one generation goes over and is replaced by the next. 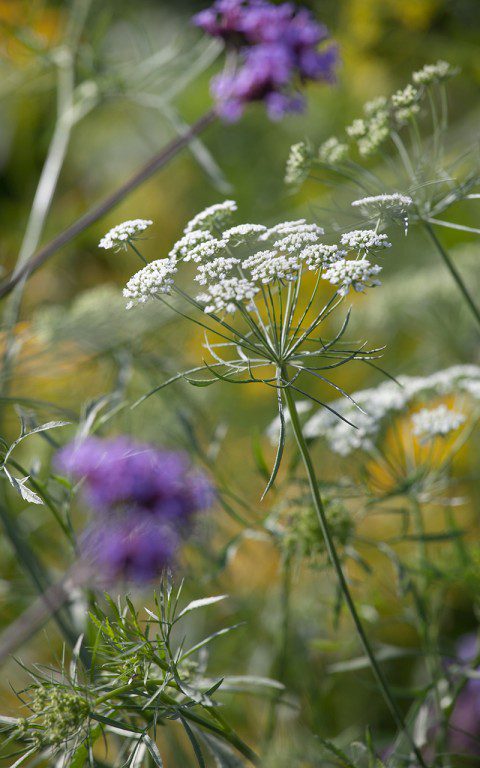 The Ammi majus are a good example and two sowings – one in late March, the next a month later – will keep you in flower until the autumn. Otherwise known as Bishop’s weed, Ammi originates in the Nile Valley, but is adaptable to our climate and will repeat itself gently from year to year wherever the seedlings can find recently disturbed, bare ground. Though it is often used now as a cut flower, the sap can cause phytophotodermatitis, a chemical reaction which makes the skin hypersensitive to ultraviolet light causing burning, itching and, in severe cases, large blisters. So far I have not been susceptible but, having been burnt once after handling Giant Hemlock, I recognise the risk and work around it in long sleeves and on a dull day. 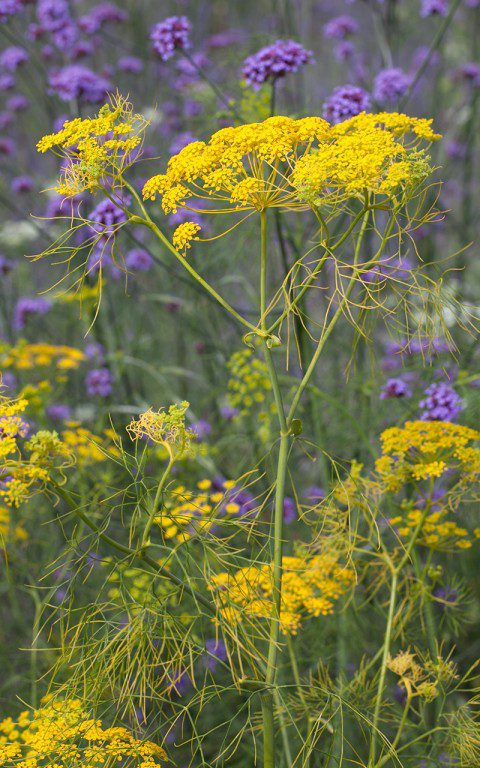 Risks aside, it is a beautiful thing, rising up tall on wiry stems, to a metre or 1.2m at full stretch. I like it for introducing light which is soft in tone into a planting, a sparkle that is repeated again, but rather differently, in the glowing, acid-yellow of Ridolfia segetum (main image) . This is the first year that we have grown the Corn Parsley. A Mediterranean annual that could easily be mistaken for dill, but its flowers are brighter and brightening still as the flowers mature. I like the zing and zest amongst the blues and the little bit of friction that prevents the Verbena from feeling too pretty. I want the planting to feel informal, but I want the colour to be sharp. 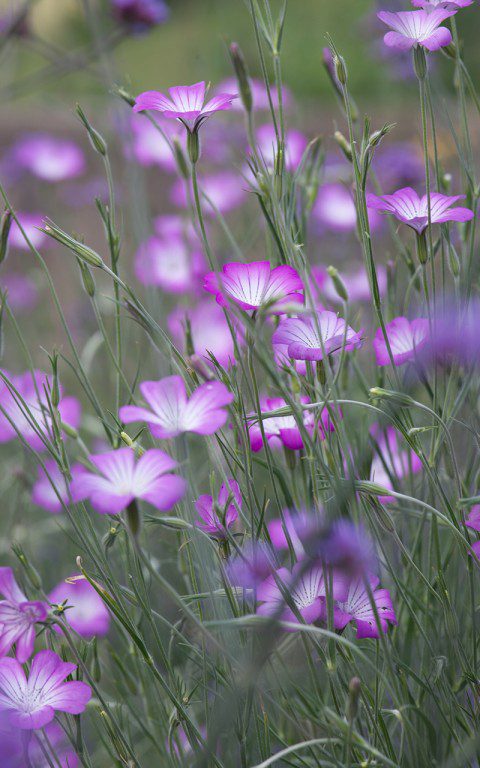 The Agrostemma githago ‘Milas Snow Queen’ are a case in point. We have enjoyed the willowy growth as it has raced up to flower, silvery-soft and catching the breeze to shimmer. I looked forward to the creaminess of the simple, upward-facing flowers, but the seed we were supplied must be ‘Milas’, its very pink and very showy cousin. Having grown them from seed I gave them the benefit of the doubt but, as the volume of flower has increased, the colour in the bed is altogether wrong and makes the couplings of lavenders, sages and delicate umbellifers saccharine and cottagey. They draw the eye from a palette which, although it has its contrasts, is harmonious in shades of blue, white and yellow. The white corncockle I had planned for would have added a shimmer and flutter without the confusion of another colour. Clarity has been regained easily enough as we have been cutting down whole plants and bringing them into the house for cut flowers. Today, however, the tipping point of pink was reached, and we took out the whole lot. Brutal perhaps, but it is important to be disciplined and stick to your vision, as a single element can all too easily change the mood and success of a planting entirely. Next year I shall try again undaunted with Agrostemma githago ‘Ocean Pearl’, which may also be better as it is smaller flowered. 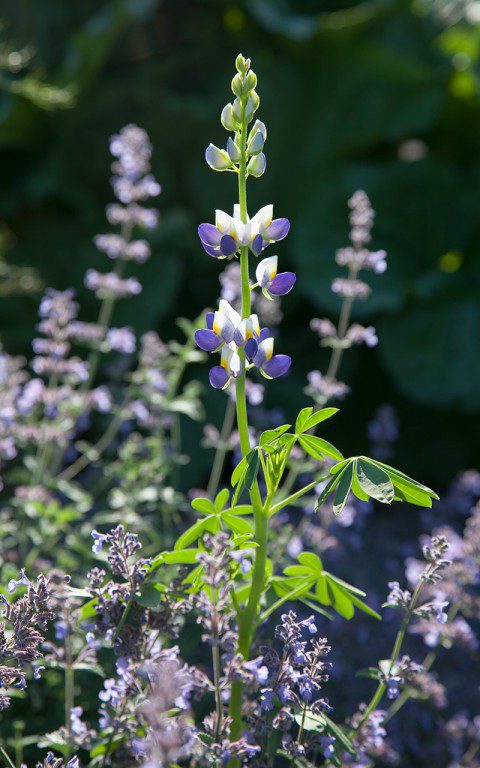 The Lupinus ‘Blue Javelin’ have been beautiful in the planting and have been the making of the corner where they rise up through the catmint, Nepeta ‘Six Hills Giant’. However, next year I’d like to try the pure gentian blue of Lupinus pilosus. I first saw this remarkable plant as a spring ephemeral in Jerusalem and then, more latterly, amongst acid-green Smyrnium perfoliatum in Greece. The colour would be a better match to the indigo of  Salvia x greggii ‘Blue Note’ and, combined with the Ridolfia, the electric contrast is something I want to keep up in the planting so that it has a charge. 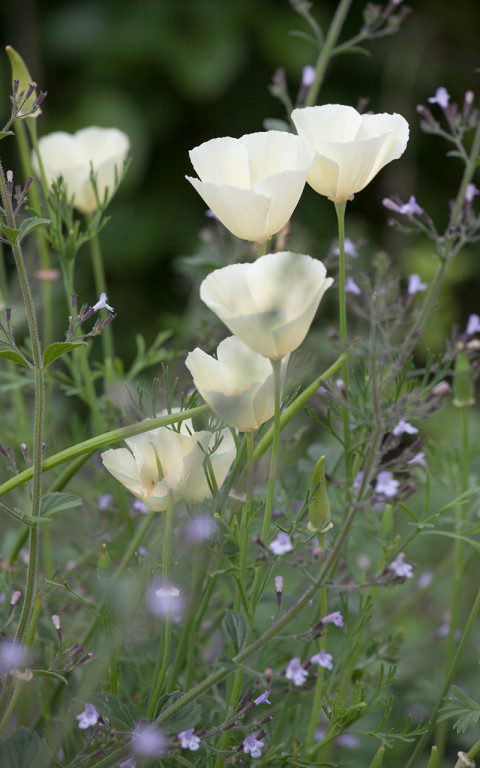 The Eschscholzia californica ‘Ivory Castle’ were the last of the annuals to go into this planting, but one that I will certainly keep feathered at the margins in the future. This a good selection, creamy white and small-flowered and a pretty contrast when the sun prompts the flowers to unroll their scrolls revealing a buttery yellow centre. The scale of the flowers and their lightness is good with the tiny flowers of the Calamintha nepeta ‘Blue Cloud’, but you have to watch this apparently humble annual. Californian poppies take their position by stealth, slowly spreading over the season to smother their neighbours. Being a new planting, and grateful though I am for their immediate participation, I am watching out for their neighbours and keeping an eye on the balance between short and long term gains. 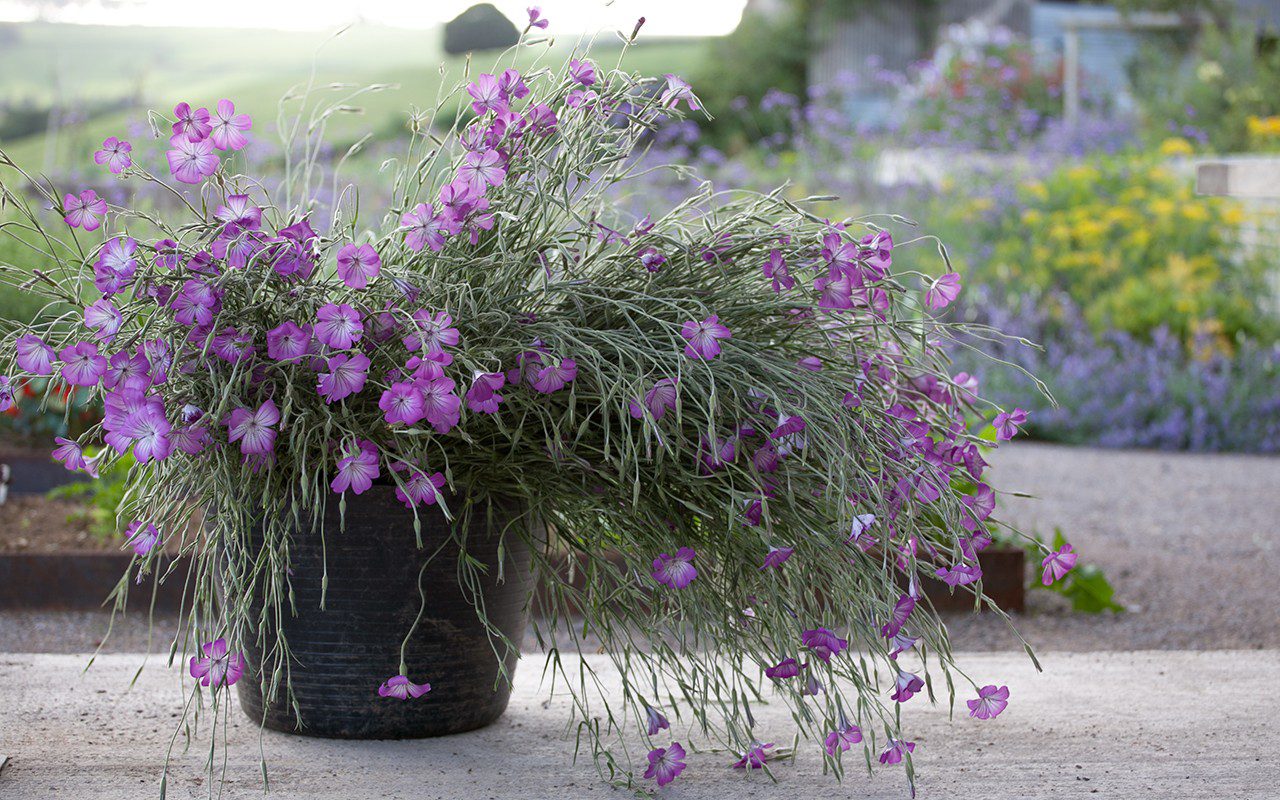