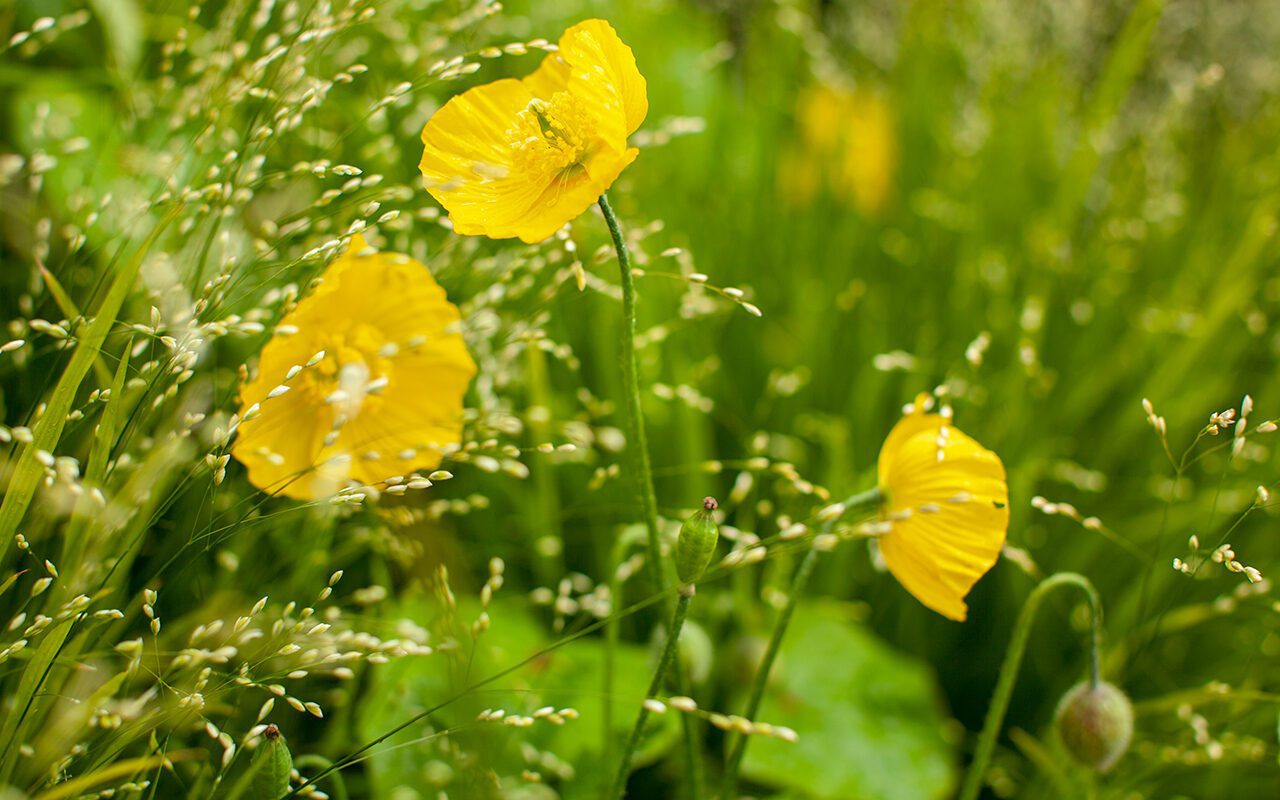 Bright as sunlight and illuminating these wet, windswept days, the Welsh poppies are dancing down the steps. This is their way, seeding into cracks and crevices and taking advantage of any window of opportunity. This is usually in bare ground but, being adaptable, it could also be in the centre of a later-to-emerge perennial. The seedlings, which are happy in cool shade, take the initiative, sending down a sturdy taproot and then bolting up unexpectedly the following year without you so much as noticing.

This is how they arrived here, as stowaways in the ark of plants that I brought with me from the Peckham garden. Probably wedged in the roots of the Molly-the-witch peonies or amongst the hellebores which, in turn, hitched a ride in the plants that I brought with me from Home Farm years before. Now that I cast my mind back, hopping and skipping from one garden to the other, I can trace them back to a trip I made to the Picos de Europa in northern Spain when I was in my early twenties. They were a highlight on the way there, growing with wild goat’s beard and Mourning Widow geranium on the cool, shaded side of the Pyrenees. Their bright, gold flowers were the reason we stopped and climbed amongst the rocks to see where they grew and with what companions. Beguiled, the seedpod I slipped into my pocket marked the beginning of their journey here.

Meconopsis cambrica is wide-spread in upland areas of Western Europe and appears here in south west England, parts of Ireland and Wales, hence our common name the Welsh Poppy. Though in the wild you will find it, as I did, in the cool crevices of rocky places, a garden setting can emulate these conditions readily. So readily sometimes that you have to be careful where you let it seed. One plant that I couldn’t bring myself to remove that had found its way into a crack in the concrete in my growing area behind the barns has seeded repeatedly into the trays of seedlings and pots nearby. This is how many of our plants have found their way into the garden.

Being thoroughly perennial and happy to find a niche, their spring to early summer flower is welcome now before the garden gets into full swing. From bright green, ferny foliage the fine yet sturdy stems rise and stand free in their own space. The hairy cases are cast aside as the buds tilt upright to reveal the crinkle of bright petals. Each flower lasts just a day or two, but there is a relay of buds that will throw colour for quite some time. The secret to keeping them within bounds is to cut them back, leaves and all before they seed. A second refreshed crop of foliage and sometimes flower will return and these are usually the plants that catch you out to throw their seed when your eye is then firmly set on the summer.

We have a naturally occurring soft orange form that I’ve let run on the other side of the barns, but I do not want it to pollute the pure chrome yellow of those that enliven the garden. Away from both, by the trough in the milking barn yard, I am building up a colony of the variety ‘Frances Perry’. Though more diminutive in stature, the dark tangerine flowers are quite my favourite thing of the moment. Flowering for a month to six weeks they coincide with the acid green of Euphorbia cyparissias ‘Fens Ruby’. Opposites on the colour wheel which vibrate one against the other.

Apparently, this form is less profligate as a self-seeder, but my pot of seedlings that were sown when ripe last summer and overwintered so they got the frost are looking like they are far from difficult. Difficult is not a word I would apply to the Welsh Poppy which, if it decides it likes you, will probably be with you for the long haul. Here and there and, if you are not a little careful, everywhere there is a cool corner and opportunity.