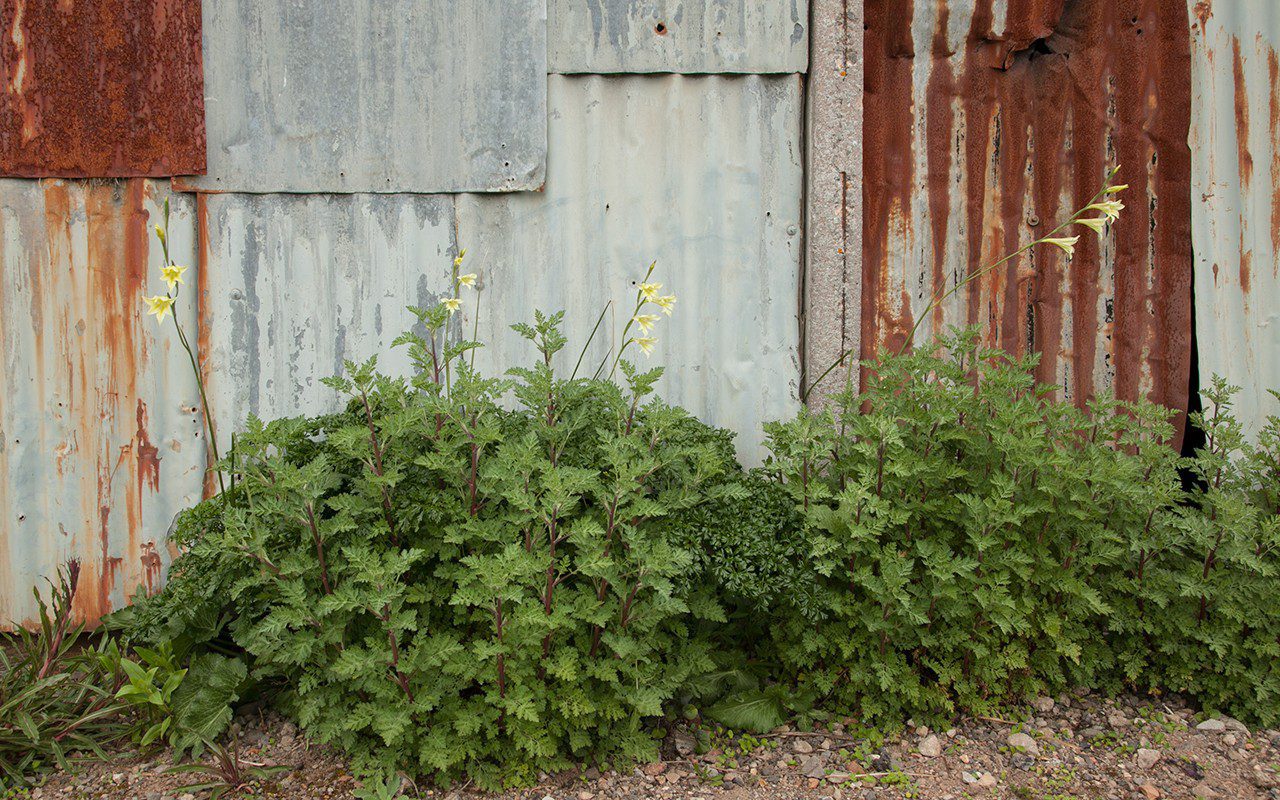 It has rained every day but one over the last fortnight. Not just a passing shower, but the whole day, like the ones you remember confining you to the house during the school holidays. The ground is wet, as saturated as it can be, and the stream has been rushing driftwood into dams, scouring the banks and rumbling stones into new places.

I have ventured carefully onto the beds just twice whilst we have been here over the Easter period to pull bittercress and winter-growing speedwells. They have seized the no-go zone and have made growth despite the cold. Hardy celandines have flushed the hedgerows with leaf, but they have not been showing their lacquered petals because the sun has stayed behind cloud. Elsewhere, there is half as much growth as this time last year and I find myself yearning for the chance to fill a jug with spring things, for the excitement of the new.

With the winter refusing to loosen its grip, the pickings have been slim, but this is compounded by the fact that this is a new garden. The tardy spring is a also a clear reminder that when you start from scratch, a garden is a commitment to waiting and though I know it will ease as soon as the weather warms, right now I am feeling the hunger.

I have started a list of early to bloom flowers that I’d like to see more of next year. The garden could take more pulmonarias in several places and in quantity for that early colour, and so that I can lace them with early bulbs. Right now, this is a garden without bulbs, because I like to feel settled for at least a year before introducing a layer that can complicate change if you need to make it early on.  We have bulbs in the meadow banks that are slowly establishing, but their absence amongst the new life of the garden is stark. I want to see erythroniums where there will be a little shade, Ipheion where the sun can spring open their flowers and early Corydalis to make their way through the groundcovers as they mesh together. 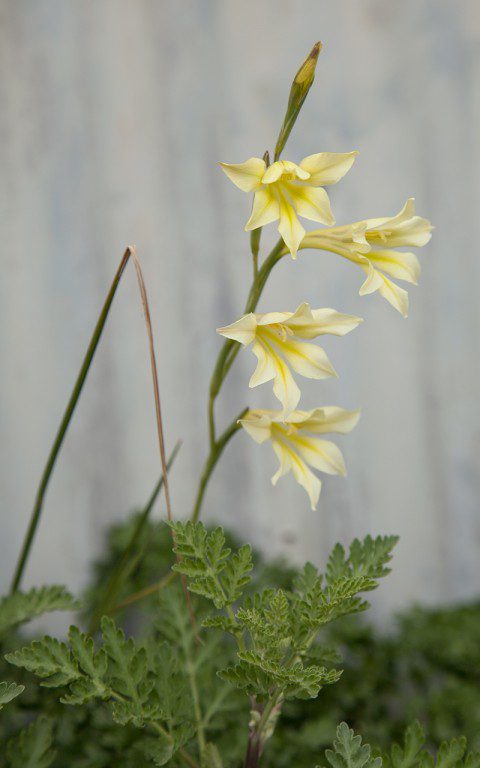 Up by the house and alongside the barn where we are a couple of years ahead and have already started to introduce the bulb layer, I have planted Crocus speciosus, Nerine bowdenii and Amaryllis belladonna for the autumn, but right now and rising above them all at the other end of winter is Gladiolus tristis. This willowy South African is a week or so later this year, but miraculous enough in its emerging form to stave off my hunger. Awakening from summer dormancy in the autumn, their needle like leaves push through the receding growth of their neighbours to stand tall already through the dark months. Reading will tell you that they need a sheltered spot and yes, I have seen this winter green foliage damaged in a frost pocket, but they have stood unscathed by this year’s winter on our exposed slopes. Literature will also tell you that the Marsh Afrikaner is to be found in wetland areas and on banks above streams in high grassland in the wild, but here free-draining ground and full sun provide their favoured position.

The flowers, which unfold themselves like bony fingers from their slender glove of foliage, are delicately balanced on almost invisible stems. Their necks tilt upward to suspend the flowers as they develop and there is room between each, flushing later in April first green then a luminous primrose to cream as they age.  Standing at almost three feet by this point the hooded blooms will catch the slightest breeze to sway, tall and elegantly.  At Great Dixter, where I first saw it in the Sunk Garden, I imagine its night perfume would be caught on still air held by the surrounding buildings. Here on our breezy slopes, we have it by the path so that you can dip your nose to the flowers at twilight.

Staking the rangy limbs is necessary if they strain and topple for light, so I like to grow it hard in a bright, airy place to keep strength in the limbs. Staking it once it is grown is almost impossible, however, as its foliage is every bit as delicate as the reeds it resembles and will bend irreparably once it falters. A network of hazel twigs, inserted if you can remember in the autumn, will allow it to grow into position and not to distract from its finely drawn outline. One that in every move of its early awakening will help in staving off the hunger pains brought on by a reluctant spring.