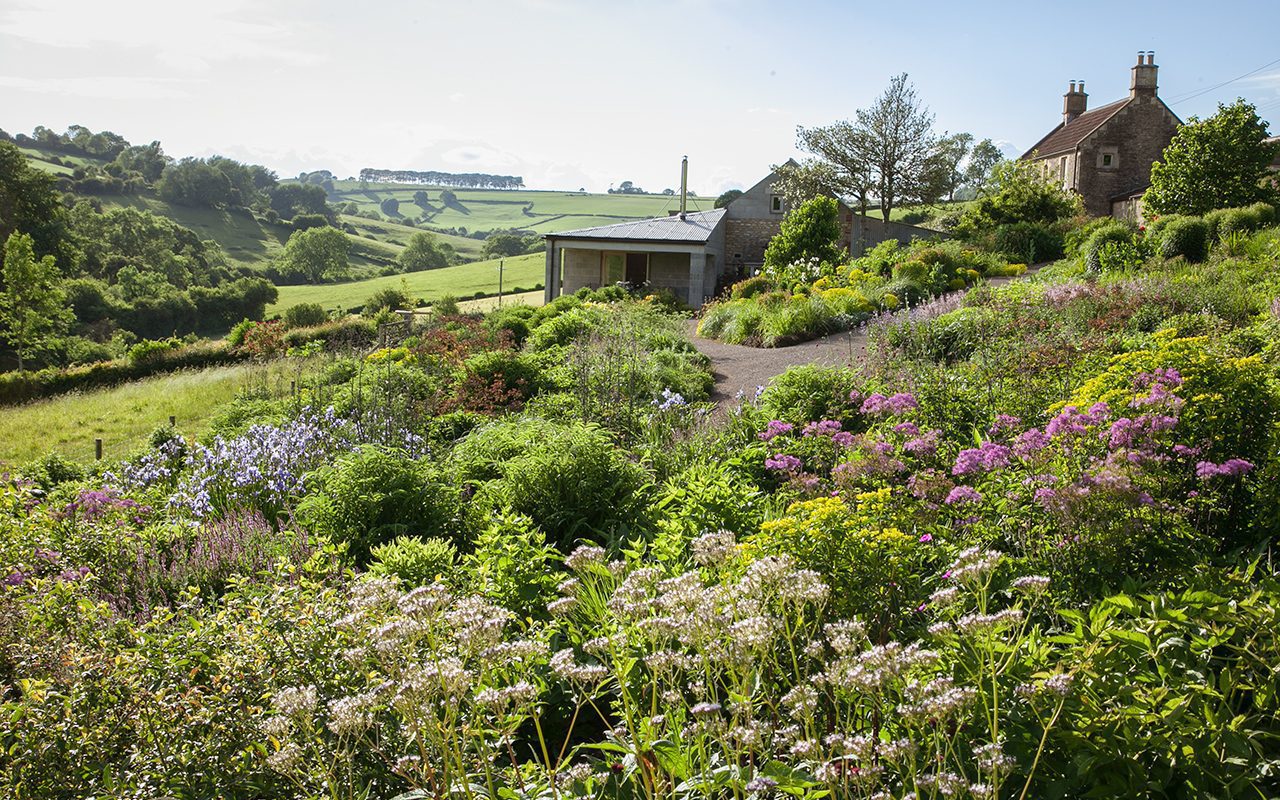 It has been the most wonderful spring. Cool and nicely drawn out and kind to the irises for being dry during their magnificent three week flurry.

The garden is coming into its third summer in the greater part and its second in the remainder. Time enough for perennial planting to mesh and to have settled into serious growth as opposed to establishment. The roots are down and with it there has been a tidal surge that has been expressed most graphically in the Ferula communis. Fergus Garrett gave me two pots of seedlings four years ago. The straight F. communis and its more slender variant, F. communis ssp. glauca. They were potted on into long-toms to encourage a good deep root and kept in the frame for a winter before being planted out as yearlings.

Two growing seasons putting their roots down saw their filigree mound of foliage ballooning over the winter. They are usefully winter-green, providing a counterpoint to most of the world being in dormancy and, being on the front foot, by spring they were the trigger that let us know that the sap was rising.  You could feel the energy mustering at ground level. A clenched fist at first when you parted the foliage to see what was coming, but soon a racing limb which soared skyward before branching and flowering against blue like an acid yellow firework.  They have been quite the proclamation. One of optimism and joy and a garden that is finally coming together. In the perennial garden where the outer planting is now coming into its third growing season, I can see how things are playing out. The giants in the mix, in this case Sanguisorba ‘Cangshan Cranberry’ and Thalictrum ‘Elin’, have already muscled out anything that does not have the stamina for competition. I moved the asters that were showing me they didn’t like it out to the edges and replaced the gaps with shade-loving Cimicifuga rubifolia ‘Blickfang’, which were sent from Hessenhof Nursery in Holland. I like responding when a planting tells you it needs change and the thought of using the tall growing plants in our exposed, brightly lit site to shelter those that naturally prefer the cool ground. We could probably not have got away with this in the first year without the cover to prevent the cimicifuga from burning.

The iris here in the perennial garden are selected for their spearing foliage and refined form of flower. Iris fulva, the copper iris, is shown to best effect amongst bright Zizia aurea, and Iris orientalis from Turkey towering architecturally above their companions whilst the planting around them is still low. Early spears are one of the aspects I enjoy most in the early garden and Iris sibirica ‘Papillon’ have been as strong and definite as you could ever wish a plant to be. In colour they have taken over neatly from the camassia,which were introduced this year. I like to wait a year or so before introducing bulbs so that I know where change might occur and can be sure they have the space to establish unhindered. I’ve learned though that camassia that are prone to seeding do not make good bedfellows in open ground, for they are profligate. Camassia leitchlinii ssp. suksdorfii ‘Electra’ is reputedly sterile and finishes just as the iris come into flower. Self-seeders have proven to be problematic on our rich ground so, when I am in doubt, I deadhead and leave a sample to see how seeding plays out.

This is exactly how I will manage the Allium atropurpureum, which are now worked into the planting in the middle of the garden. We planted fifty bulbs last autumn in the gaps between the Digitalis ferruginea. They have been wonderful for enlivening this area early in the season with the promise of leaf and bud and now height amongst the acid green euphorbia. With summer firmly here but fresh still in its infancy, it is the moment of the euphorbias and they are mounding luminously throughout the planting. Standing back and looking down on the garden from The Tump, they remind me of my first sighting of the giant fennels in the Golan Heights when I was studying at the Jerusalem Botanical Gardens in the mid-eighties. It was forbidden territory, the minefields floriferous for being completely inaccessible. As far as you could see there was a march of giant fennel with euphorbia and searing red anemone at their feet. Perhaps this memory was etched into my mind when I planned for spring and early summer here, for I find myself looking on and seeing the similarities. Euphorbia cornigera with its dark red stems high up in the garden, E. wallichiii with its weight and volume to the lower slopes where the ground lies damper and in the high, dry centre the Euphorbia x ceratocarpa nestle the black alliums. Scarlet Papaver ‘Beauty of Livermere’ dot and brighten.

As I look out of the window to the first proper rain we have had in quite some time, I can see the plants exhaling. The greens are brighter – if that were possible – the garden plumper already and readying to push again. There is promise and it is amplified.