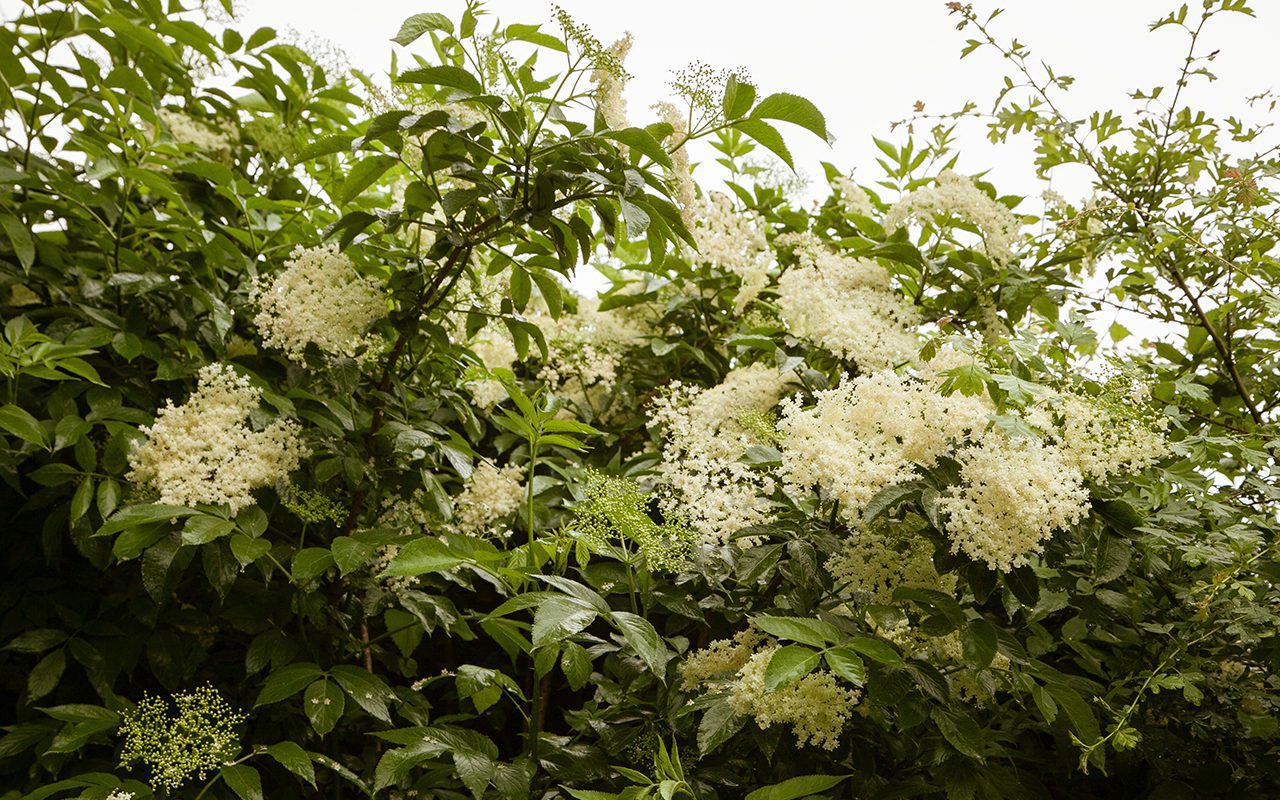 The elder is spilling from the hedgerows, creamy, heavy with flower and weighted by a deluge of June rain. This is their month and we can see them marching up the valley and foaming from the edges of the copses where they are happy to seed into shadow, but prefer to push out into the sun.

Elder is fast. Their shiny black berries, which are some of the first to be gorged on by birds in the autumn, are deposited wherever there has been a perch. I find them here under the woody shrubs in the garden and where there has been a perennial left standing that has provided a place for a pause. We even have a quite mature elder that has found its way into a humus laden crack high up in an old ash pollard to prove their ease in finding a niche.

They look innocent as seedlings and are easily weeded but if you miss one you will have a sturdy little plant that will jump up and out into the light in its second year and in the third already be demanding space that might have been promised to something else. They go on in life living fast and hungry and, if you have them in a hedge and leave it uncut, they will create a gap there by simply outcompeting their neighbours. They age quickly and fall apart with topweight, so opening up a wedge. It is into these gaps that you will find brambles seeding and then a whole new wave of succession.

I must admit to removing them where I have been repairing the hedges so that I can replace them with hedging plants that retain a more measured growth cycle. Hazel, hawthorn, dogwood, viburnum and eglantine rose. It is bad luck I know, but where I have done it I now have hedges that are opaque in winter and layered from the bottom up with three plants replacing the weight of the interloper. A cut piece of elder wood reveals why its old Anglo Saxon name aeld (meaning fire) was given, because the hollow stems were used to blow air directly into the heart of a fire. Although it is also unlucky to bring elder inside, I suppose there must be room for exceptions.

We are lucky enough to have room to let a number of elders have their head here and, only when June weather allows, we steep them and make cordial, since the flowers need to be dry when harvesting. Their heady, sweet perfume is completely distinctive and reminiscent of this time later in the year. A moment of fecund growth and dampness still in a young summer. Where we have let a hedge grow out to make a bat corridor on our high field, a plant that is easy to harvest is paired very beautifully with wild rose, the cream and pink heightened for their company.  The coupling has been inspiration for a cordial that Huw is making this week with some of the first roses as a means of capturing this moment.

Where I want to make a quick impression in a garden that needs something evocative of a wilder place, or indeed to segue from garden to landscape, I will often use the cut-leaved Sambucus nigra f. laciniata. This is a lovely plant, strong but lighter on its feet than the straight species and already tall and making an impression in year two. More ornamental selections have given us good dark-leaved forms with cut foliage that are exquisite and easily used. The filigree of ‘Black Lace’ and ‘Eva’ are better I think than ‘Black Beauty’, which has a more simple leaf that can look heavy. The darkness in their genes spawns flowers that are as pink as the species is cream and are a strong influence in the June garden. I haven’t grown the yellow cut-leaved ‘Golden Tower’ which is said to be smaller in stature, but it could be nice in a little shadow to give the impression of artificial sunlight when June days are bringing us (welcome) rain and grey skies.