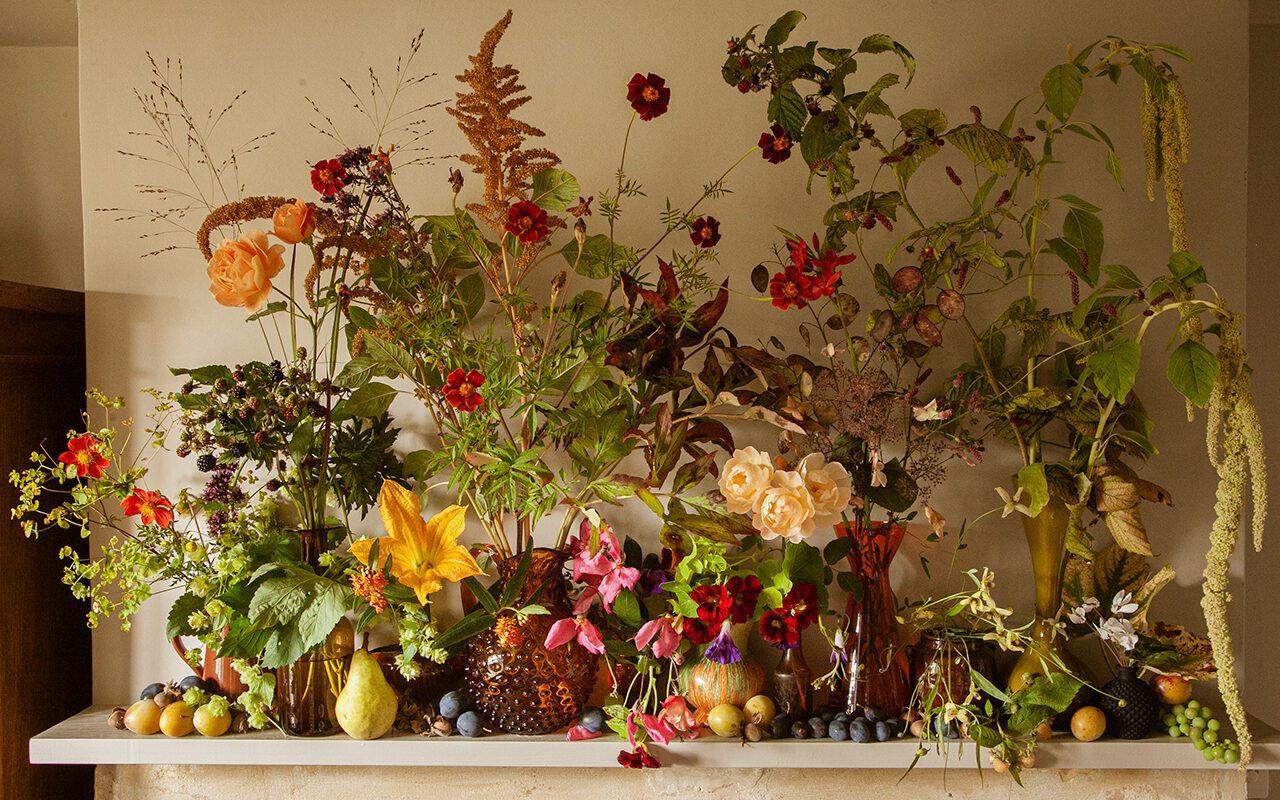 Autumn came early this year and before the month of August was out. Refusing to go inside until bed time, we’ve been huddled in blankets, wondering if it is also too cold for the courgettes to throw one last crop and whether the tomatoes in the polytunnel will be more green than red now the evenings are shortening.

We have taken two weeks off to harvest. The last of August and this first week of the golden month. Timed perfectly to not miss the plums that escaped our late spring frosts, as those that did set fruit have been plentiful. ‘Warwickshire Drooper’, appropriately weighting the branches and a fine crop of damsons. Inky ‘Merryweather’ and ‘Shropshire Prune’, the smaller and ‘wilder’ of the two. The pears decided to drop in sequence, one fruit first, to warn you of the coming deluge and then suddenly, everything all on the ground. Get there on the day after the scout that fell and a quarter turn will yield the ripe ones the day before they drop and bruise. ‘Beth’ with her must-eat-immediately creaminess comes first and then ‘Williams’. Firm and then, when just perfect, melting. Countless numbers from the espaliers and fortunately a pause now before ‘Beurre Hardy’ and then a longer wait for the October ‘Doyenne du Comice’, the finest of all and the grand finale here.

The kitchen garden is now in its fifth summer and we have an embarrassment of riches. What to do with such plenty ? In times gone by we would have pulled together to bring in the fruits of the growing season, but in this unusual year, we are missing the many hands and accompanying banter of sharing this time picking and the community effort of preparing and preserving.

To stop and put aside the feeling of guilt that some of your efforts will inevitably go to waste is part of letting the autumn happen. Nothing really does get squandered and we have learned to step back at a certain point and try to take things in. The surfeit of pears and apples that lie strewn in the grass will not have time to moulder before the birds and the critters have them. You need to make time to take these moments in.

This is what this week’s mantlepiece is about. The beginnings of a winding down that will surely leave the growing season behind. Slowed, but far from static, the garden has plenty yet to give. Tagetes and morning glories arguably better than ever in the soft days. There are the autumn performers too, the flowers that are here to complement the senescence. Dahlias and cyclamen, schizostylis and amaranthus designed for now and making September their own. The last push of roses and a final flurry of clematis, surrounded already with a gathering backdrop of silken seed and the rewards of a growing season coming to a close.