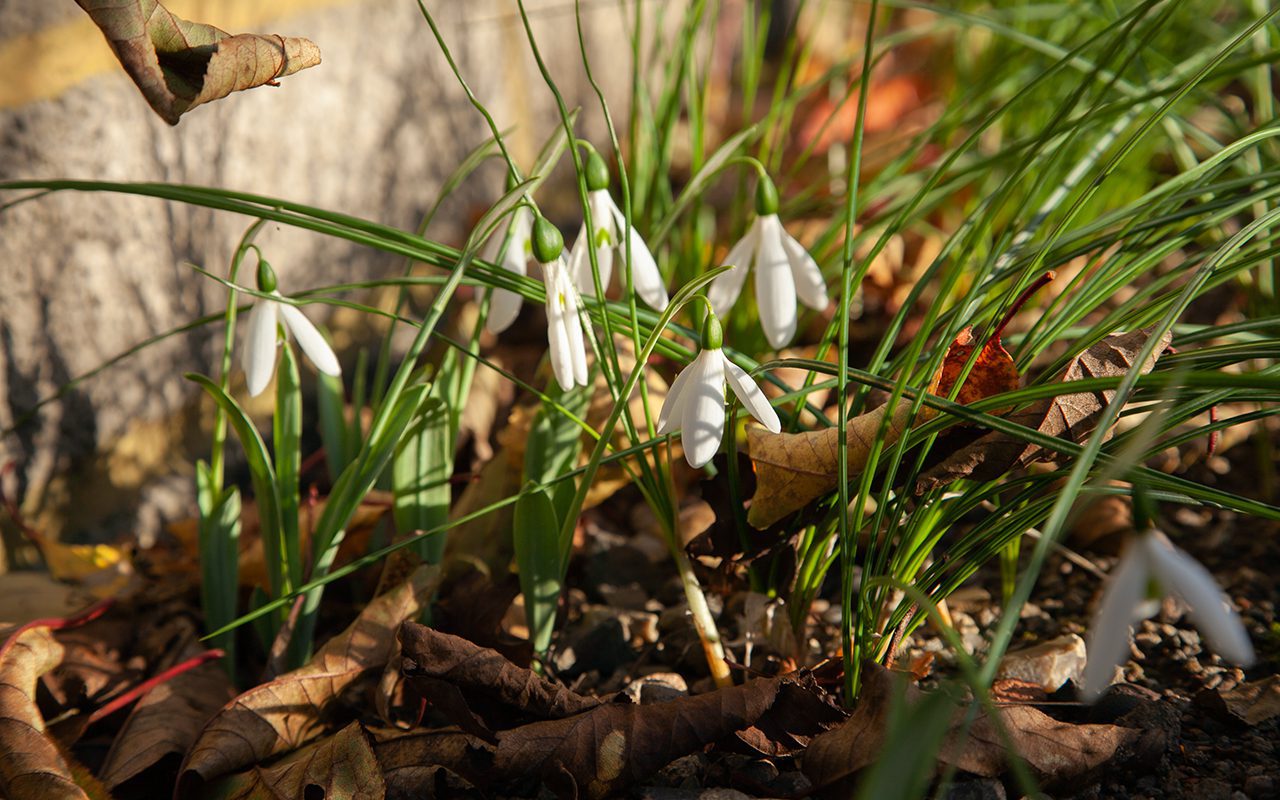 Earlier in October I posted an image of my first autumn snowdrop. Reactions ran high for this apparently out of season anomaly. Surely the snowdrop is an emblem of deep midwinter, a welcome sign of life in a grim February, but out of place for showing its head in the wrong season? Being thoroughly under their spell and wanting the spell to last for as long as it can, I was surprised that people were not as delighted as I am by the first of the season.

I never meant to fall so hook, line and sinker and for years stood by a self-imposed rule that I had to be able to spot the difference between one snowdrop and another from a sensible distance in order to justify acquiring them. To a point this is still true, but the more you go deeper, the more you understand that galanthus are as varied as a room full of people. Some rise early, others with the crowd or fashionably late and their differences in character are as nuanced as anyone on the spectrum of galanthophilia could possibly need them to be.

I am not a collector for collecting’s sake and would say, compared to some, that I am a peripheral galanthophile. However, I do like to get to know my plants and to understand their range and what they have to offer. So it only seemed sensible, when increasing my collection by a dozen or so new plants a year, to do it by extending the season. Not necessarily much beyond their February zenith when you can begin to see the spring taking a hold, but certainly brought forward. As a countermove to the inertia of the winter season when you pine for movement and for the joy they bring on those days when the sky is leaden and daylight hardly gets a hold.

My first to appear here are the autumn flowering Galanthus reginae-olgae from the Peloponnese. Triggered by the first rains and growing ahead of the competition that follows in a Greek spring, I have found them a place of their own in the gravelly edges of the drive and where they get a good day of winter sunshine.  I am very much at the getting-to-know stage with my autumn varieties, but five years in and I am beginning to understand their requirements. ‘Cambridge’ is the first to flower, robust in habit and perhaps the strongest.  ‘Blanc de Chine’ is refined all in white, without the green on the skirt and ‘Tile Barn Jamie’ profuse in flower, but I do have some weaker forms which are shy to the point of perhaps being reluctant. I am moving them about if they fail to bulk after three years to see if they prefer a different position, because it is usually the gardener’s fault or the fault of the garden rather than the plant. If I fail within another five years, it is fair to move on and work with those that do.

These early treasures are grown through a carpet of protective Erigeron karvinskianus which covers for them in their summer dormancy and is cut back hard in September just before they emerge. Galanthus reginae-olgae are distinctive for throwing flower ahead of foliage and for the silvery mid-rib to the leaf when it follows afterwards. I would not say they are a robust plant and would never consider growing them in grass, but they do provide if you make the time for them. Time to keep them clear of competition whilst they are in leaf and free from slugs, which this year have damaged several of the flowers. A mild autumn, new fresh growth and a last feast before the cold keeps the slugs at bay making them easy targets.

Next into flower, picking up here in the first days of November are the early forms of Galanthus elwesii, an easy species with wide, blue-green foliage. Our most commonly grown galanthus after Galanthus nivalis, this Turkish species is immensely variable as a garden plant and has thrown up many variants.  Those in the G. elwesii (Hiemalis Group) usually flower before Christmas and are far less choosy than G. reginae-olgae, being happy to live a snowdrop’s life as you might know it and not in need of such sharp drainage.

Slowly, as they have proven themselves, I have been moving the earlies from my snowdrop stock-bed. The stock-bed sits on the cool side of a hawthorn hedge and allows me the luxury of comparing and contrasting their habits and watching them gently bulk up from a single bulb. The lengthy row of labels points to my little obsession and the length of the hedge is my gauge and limit.

Huddling the earlies up close to the house, we get to see the differences and the concentration of a group is something worth making a special trip into the garden for. So far, the best from the Hiemalis Group are Galanthus ‘Donald Sims Early’ (main image with Crocus sativus foliage), Galanthus ‘Broadleigh Gardens’ and ‘Barnes’. There are several more, believe me, each coming in succession and picking up the season as the winter darkens but, at the risk of falling irretrievably down a snowy white rabbit hole, for now I’d better stop there.