This week has been an important one. The digger men are here, carving out the new garden and shaping the land around the house. A great divide of mud has marooned us. Venture out in any direction and you are met by instability.

There is nothing like the crunch of a decision having to be made to focus the attention on what you really need to keep. I have been taking out roses in full bloom to make way for new paths. After holding on for as long as I could, it was strangely liberating. A running rudbeckia and the bolting boltonia are now on the compost heap. I’ve been curtailing their spread since they came here, despite knowing that they were trouble. The inulas that were grown from seed are sitting in a heavy un-liftable knot that was levered by the digger and covered with damp hessian ready to be divided and potted up this weekend. Their removal has tuned my mind to decide where I eventually want them.

In planning for this moment I planted a sanctuary bed that runs at the front of the house, locked in by the path. Most of the plants here were grown from seed. You care more for seed-raised plants somehow and their volunteer seedlings have shown that they like it in this spot. Today’s posy illustrates something of the transparency in the planting. I want to see through it, for it to be light and for it to shift against the weight of the walls of the house. Yellows and greens and browns are the backbone of the planting. Of the half dozen in the bunch, the greater number are umbellifers. They make wonderful companions in associations that are naturalistically driven and bring the same feeling into a bunch. 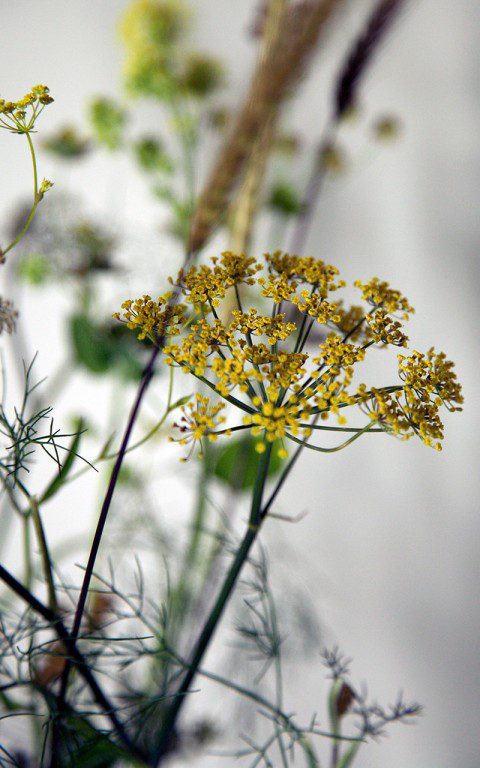 I have grown bronze fennel forever, liking the way it is from the moment its new growth pushes through to the point at which I have to cut away last year’s skeletons to make way for it. It loves our ground here, the sunshine and the free draining soil, so I only leave the plants standing over winter where I know the smoky haze of new seedlings can be managed. Now they are just showing flower, which has pushed free from the net of dark foliage. Foeniculum vulgare ‘Purpureum’ looks good with almost anything and I love the horizontality of the gold umbels when they mass more strongly later in the month. 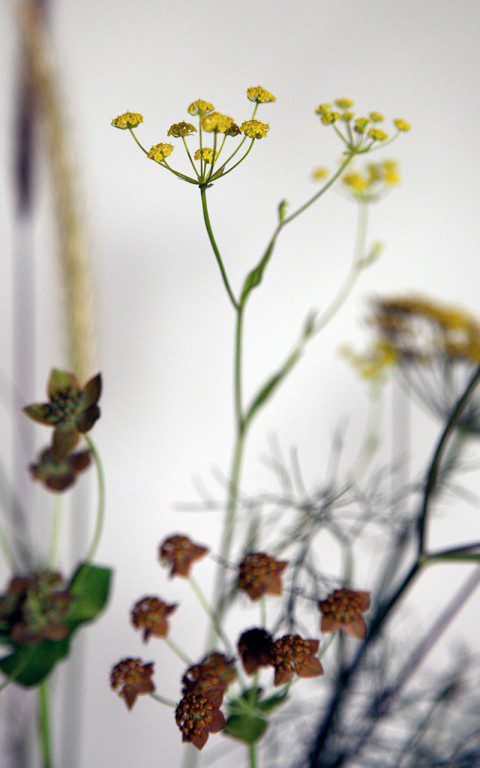 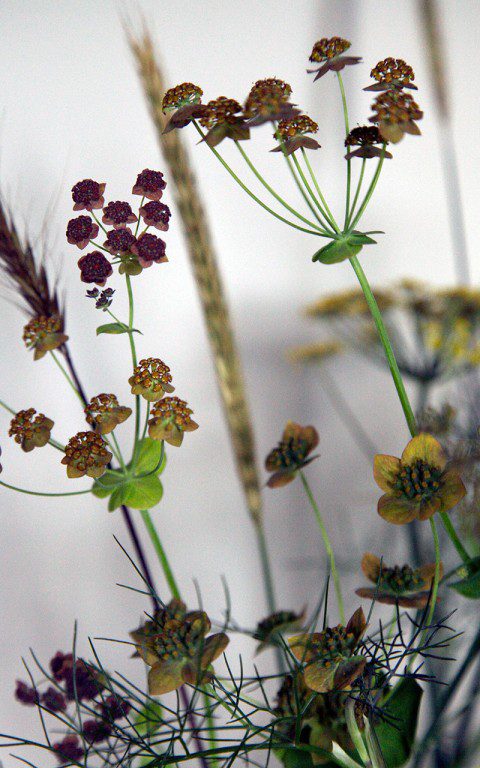 The acid-yellow umbel in the mix is the biennial Bupleurum falcatum. I threw fresh seed into the rubble around the barns and potted some up to plant them where I wanted them. They have just started to flower and will continue to form a bright cage of flower, so small and filamentous that it creates a haze of vibrancy. Bupleurum longifolium ‘Bronze Beauty’ is it’s perennial cousin. I shall write more on this later as it is an old favourite that deserves more time. 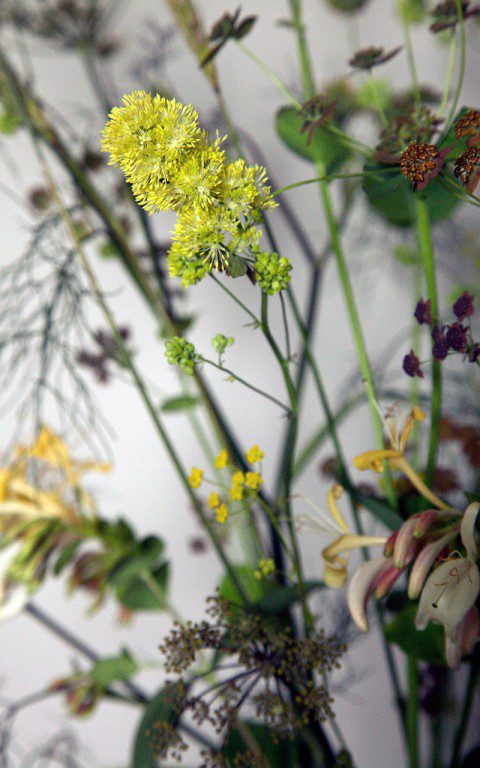 Thalictrum flavum ssp. glaucum rises up and above most of its companions on wire thin stems which catch our breezes, but there is no need for staking until they hang heavier with seed. I cut them to the base to avoid the seedlings at this point as the clumps are long-lived and you need just a handful to make an impression. The fluffy flowers are a pure sulphur-yellow and the leaves are the blue green of cabbages but fine, like lace. 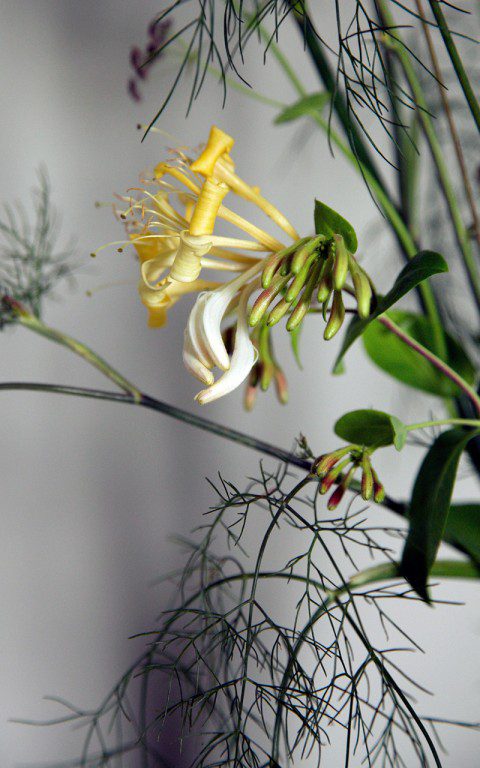 This is a good selection of the wild honeysuckle called ‘Graham Thomas’. I first saw it growing on his house when we were taken to meet him as Wisley students. I had no idea then how influential a plantsman he was, nor how much I would have enjoyed his namesake all these years later. I much prefer it to the brickier, shorter-flowering varieties such as ‘Belgica’ and ‘Serotina’. It also flowers far longer than its native parent and, after its first July flush, continues off and on into September. 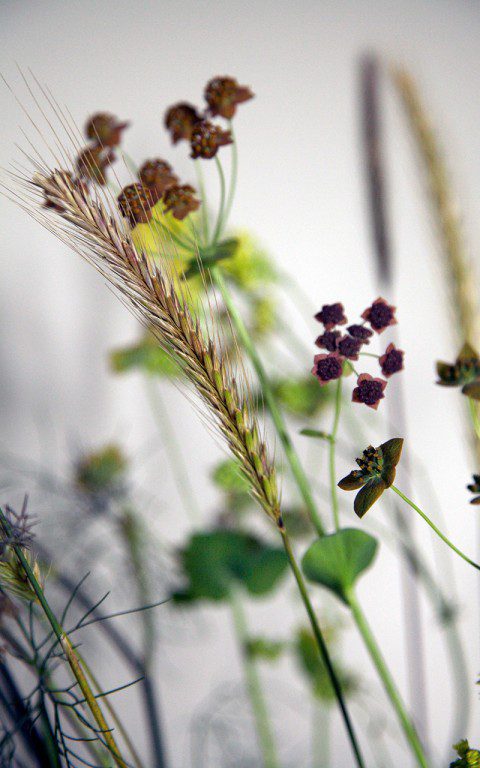 The bulbous barley, Hordeum bulbosum, was collected on a trip to Greece a few years ago. It has proven to be completely perennial, retreating to a basal cluster of storage organs after flowering. I cut it before it seeds to limit its spread, as it germinates freely. In Greece the storage organs (which give it its species name) would keep it alive during a summer without rain to reactivate growth in the autumn. Here, without a water shortage to speak of, it is happy to return with a second flush in September. The flowers are early, rising in April, to trace every breath of wind outside the windows. 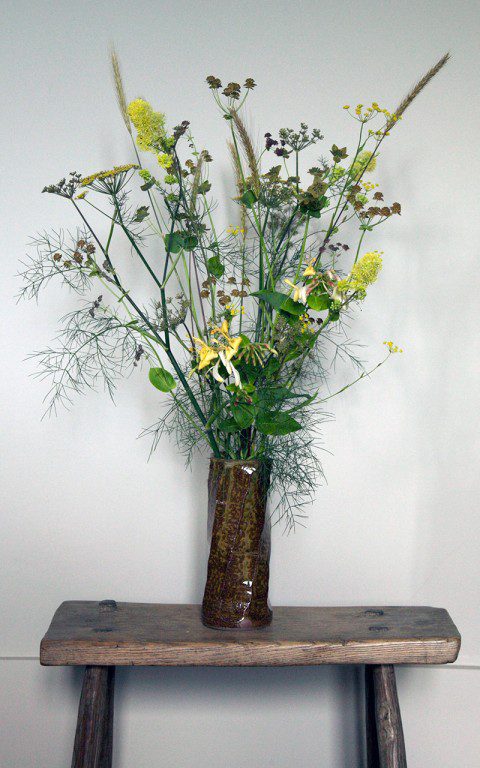