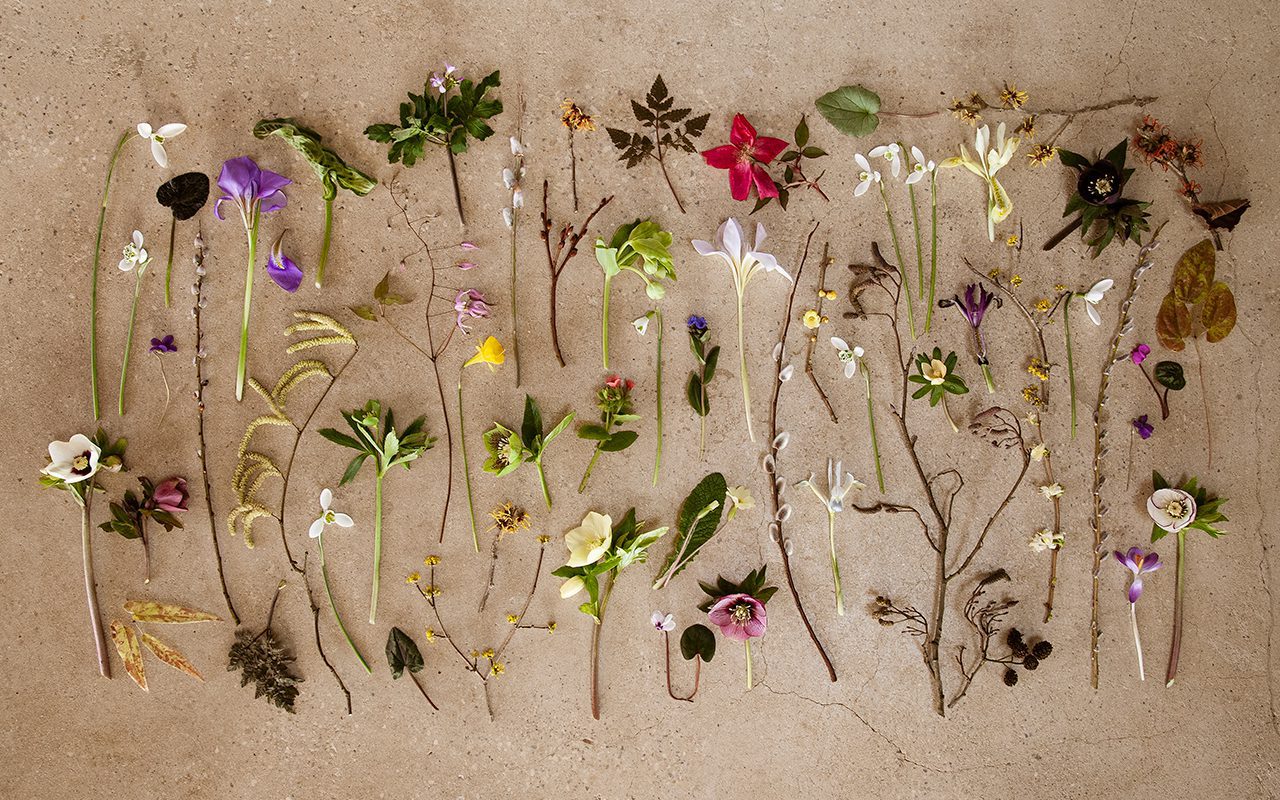 This week we have reached the tipping point. The seasonal fulcrum when winter begins the ascent to spring. As the days lengthen we note with excitement the increasing light. ‘4 o’clock! 5 o’clock! 5.30!’.

And with the light and milder days come the flowers.  Some are naturally early, like the snowdrops which pass the baton in a relay race from pre-Christmas to their peak in mid-February and the brave early hellebores which sacrifice themselves to the hail and cold driving rain of January. Others, like the Iris reticulata and a few choice narcissus, have been brought on in the cold frames to be brought to the table outside where they prophesy the change of season a few cheating weeks in advance. Pots of hope and anticipation.

But now the first emergents are gathering pace. Winter aconite and witch hazel, pussy willow and violets, cardamine and primrose, wintersweet and cornelian cherry. Diminutive and delicate by and large, but strong and sturdy enough to brave the wintery showers, these torchbearers of the coming wave are always welcome.

Last year the photographer, Eva Nemeth, visited us in every season to photograph the garden for House & Garden magazine. On each visit she also created a speciality of hers, a beautifully composed flat lay of flowers picked from the garden. Earlier this week she posted an image of the one she photographed exactly a year ago on Instagram and we were surprised to see that many of the flowers that were blooming at the beginning of February last year were not yet showing themselves. It prompted me to collect as many of the early showers yesterday to make a comparison.

As you can see there is plenty in the garden to encourage us out, despite the cold. The majority of them are small and delicate and so must be sought out, which is all part of the pleasure, of course. Picking and recording them like this, however, really makes you appreciate the amount of flower even these early risers provide for early foraging bees which, on warm days can already be found thrumming on the snowdrops, hellebores and pulmonaria.

Also this week the findings of a scientific study published by The Royal Society indicate that the flowering times of a wide range of native species has advanced by more than a month (mid-May to mid-April) since the late eighteenth century and has accelerated noticeably in the last thirty years, due to climate warming. Although the early flowers we are seeing today bring cheer and a sense of hope the majority of these plants are still flowering at the times that we are used to. However, the issue of advancing flowering times later in the season is very serious. The two main issues are exposure to frost for species that are not frost hardy, in particular food crops such as fruiting trees, and ‘ecological mismatch’, which occurs when certain species flower out of sync with the insects and vertebrates that are reliant on them for part of their life cycle.

Although the study has not looked at the flowering times of non-native garden plants, one hopes that by planting a wider variety of ornamental garden plants that are closely related to or fill a comparable ecological niche to some of our natives (as shown in the findings of the University of Sheffield’s Biodiversity in Urban Gardens Project (BUGS) and the RHS Plants for Bugs research) will go some way to helping mitigate these issues.