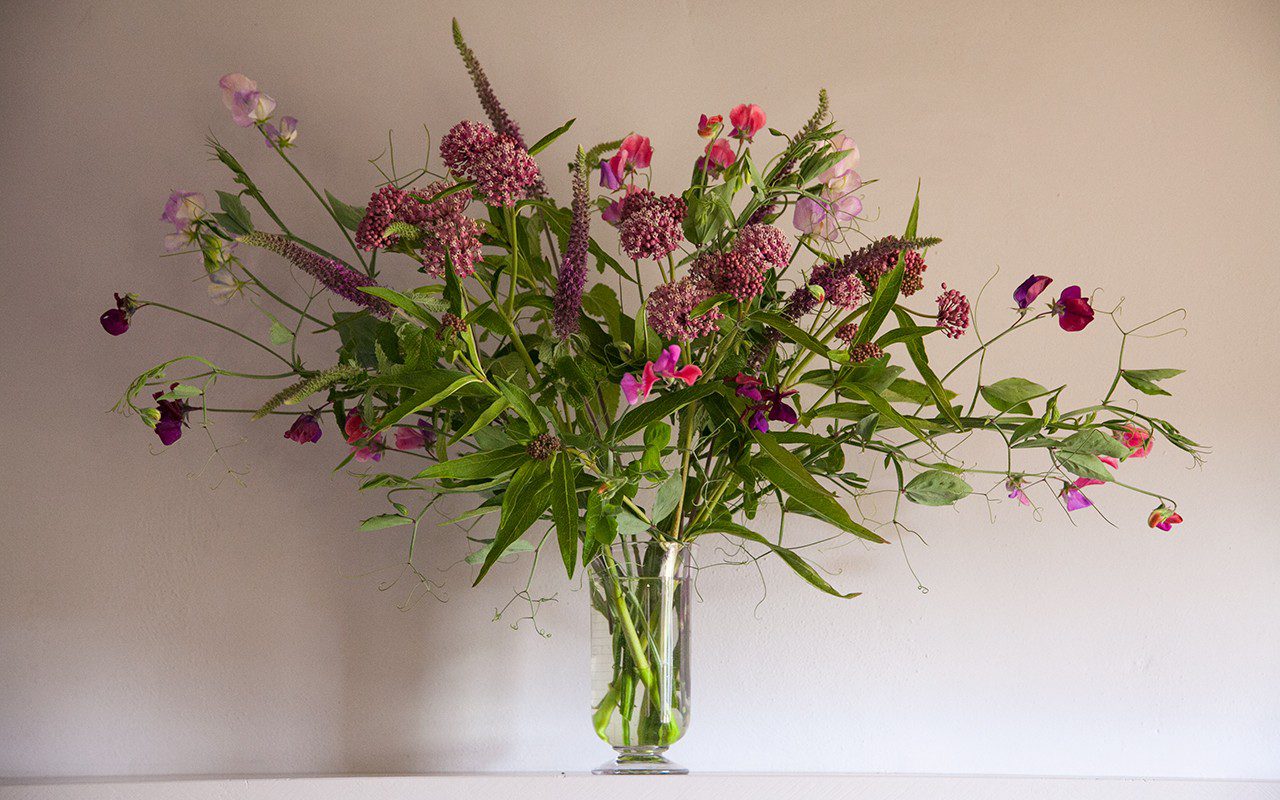 I have just returned from Japan where I was visiting the Millennium Forest in Hokkaido. My annual trip to workshop the garden was marked this year by a garden academy with the head gardener, Midori Shintani. It was the tenth year the garden has been open and the garden looked wonderful, matured by its first decade in good hands and dampened by the periphery of the tornado that was tragically battering the mainland.

It was a shock, therefore, to fly in over bleached fields and the still, blue skies of England. I arrived back to long evening light and the ensuing disorientation. A friend told me once that when you travel long distance you leave your soul behind and it takes time to catch up. Such a perfect description, but the garden here is always grounding and I meandered the paths last night until there was no more light left to look.

Our posy this week marks the change I feel in the week or so away. The meadows were cut in my absence and our plumpest field, The Tump, now backdrops the garden with a sepia dome. The garden in turn is showing signs of the season and the plants that are sensitive to the heat and the cracks in the ground that are deep enough to put your hands down are showing it. I have watered twice now, deeply and at fortnightly intervals to encourage the roots down and to compensate for the plants in the mix such as the sanguisorba that prefer it on the damp side. Of course, there have been surprises and I fully expected the Swamp Milkweed to be showing it’s origins and turning up its feet at the lack of water. I have to admit to not growing Asclepias incarnata in this country before, having only used it in American projects where we have been seeding flower-rich meadows. I first saw it stepping through prairie in Midwest grassland where its roots go deep into ground that you could tell lies wet not far down. Switch grass, bergamot and swamp lilies are its companions in the summer, but it is a plant that you often first notice in the autumn when its upright seedpods stand tall like an elongated spade on a pack of cards. They flare in late season sun when rupturing to explode contents of silvery down, the seed fluttering free on wind-sensitive parachutes. Garden selections have singled out good bright pinks, creams and whites, but the common or garden species is quite good enough and great to include for its nectar and pollen, food source to the Monarch butterfly.

Here, I doubt it would cope with our grassland which never has a period of true dormancy as it does in the freeze of the prairies. So, I have it in the new planting with Panicum virgatum ‘Shenandoah’, a silvery Switch Grass so it feels at home. The panicum is a late season grass, so it needs space around it to not be overwhelmed early in the summer. The Milkweed by contrast was quick off the blocks, so I need to do a little adjustment next spring to make sure they can cohabit.

When I left for Japan the Asclepias buds were a wonderful brown-pink, just as good in bud as they are in flower. They have taken time to open too so they promise a long season. Though I have yet to see the our own butterflies flocking as they do in the States, on close inspection the flowers are covered in insects. Brightly shiny, red beetles, hoverflies and tiny bees that make me want to do more to understand the insects that are flocking to the garden.

Standing at about a metre, the Milkweed stems are straight and nicely spaced with willow shaped foliage along their length. They have a smart feeling about them which I hope continues. More dry weather will see them getting bare ankles but the panicum will cover for this and the flowers of the grass will coincide later with the seed heads of the milkweed.

The Teucrium hircanicum, or Iranian Wood Sage, is also new to me. I bought plants last summer from Beth Chatto’s nursery when visiting the garden and have been pleased with their quiet but certain presence. The form I have here is ‘Paradise Delight’, which as far as I can tell is selected for good behaviour in being more compact than the species. At about two feet in both directions, I have it by the path in full sun despite the fact that in its homeland – where presumably it is usually hotter – it likes the shadows. The foliage, is markedly matt, puckered and erring towards, but not as grey as, a sage-green. It has a similar feeling though and its other common name, Caucasian Germander, explains why you might have seen it in an old apothecary garden for it has a modesty about it.  The dusky purple flowers,  which follow redder buds up the spike, are a magnet to bees. With deadheading, the flowers will come and come again until autumn, but the seedheads are worth waiting for so I will relax the deadheading some time next month. The sweet peas in the bunch are nearing the end of their season now are beginning to struggle in the heat despite the regular watering we have applied to keep them producing.  Picking the run of a dozen or so plants takes about an hour once a week and you need to keep picking or they will run to seed. All our plants are chosen for scent. Long-stemmed varieties that are all leg and no perfume are of little interest, so I am happy with the fiddle of the pick. They have been producing for a good six weeks already and being late in their season now they are straying from their wigwams so we can pick whole limbs. The purple and mauve bicoloured Lathryus odoratus ‘Purple Prince’ looks very like a large Lathyrus odoratus ‘Matucana’, one of the most scented and the one I would grow if I could only grow one. It too is highly scented and appears in this bunch with ‘Greenfingers’, a pale violet picotee, that ages to turquoise, which perhaps explains its rather strange name, and ‘Lady Turral’, another refined bicolor of lipstick pink and violet pink. These are also wonderfully perfumed. We have another fortnight of flower at most if I continue to apply the water and then the wigwams will be taken over by Ipomoea purpurea ‘Grandpa Ott’, which I plant at the base to cover for the peas once they decide that their summer is over and we are still itching for more.