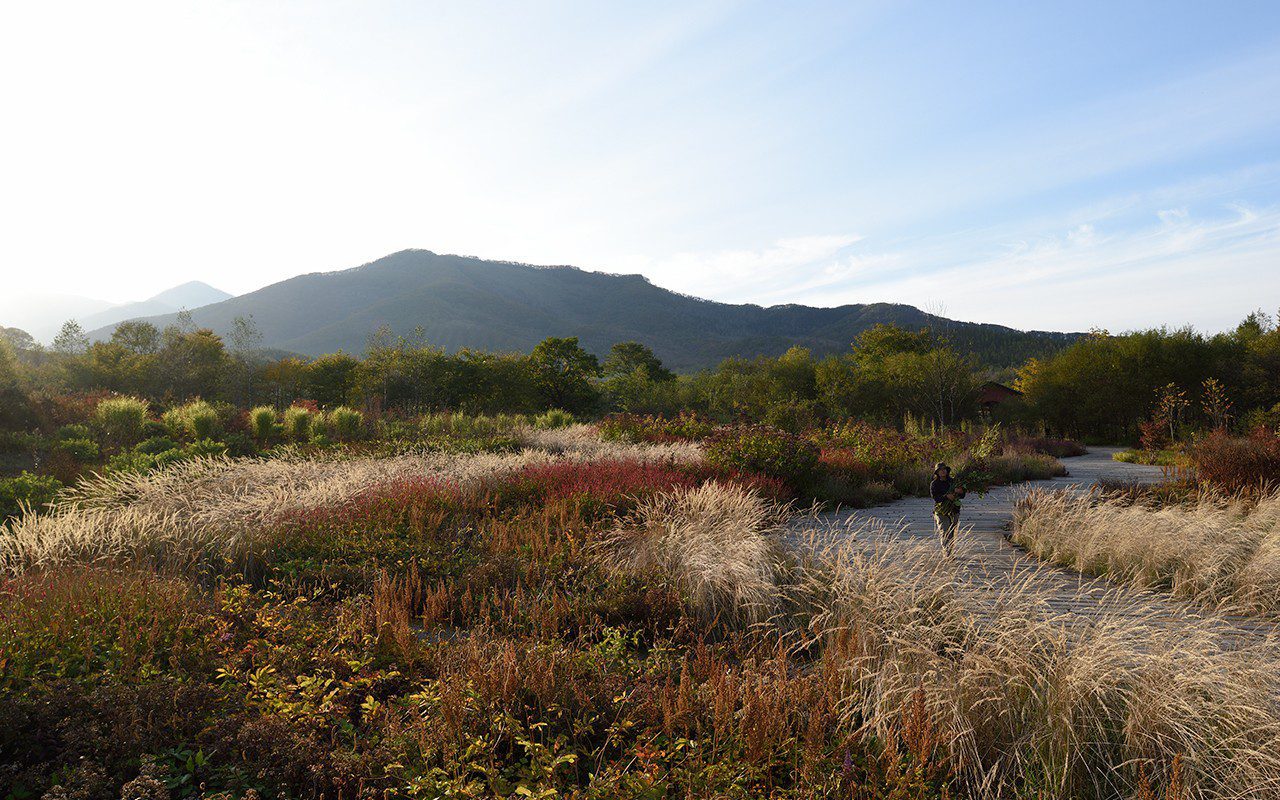 A month ago I was in Japan, on my annual visit to the Tokachi Millennium Forest in Hokkaido. I have been working at the forest for sixteen or seventeen years now and the yearly journey is always rewarding. It is a place with a big vision, where half the side of a mountain and the forested foothills are the domain. It has the feeling of the north, with air that slips over the mountains from Russia not so far away. Bears really do live in the woods and the landscape freezes to minus twenty-five, under a blanket of pristine white from early November through to the end of April.

The owner, Mitsugishe Hyashi, bought the land with the ambition of offsetting the carbon footprint of his newspaper business, but the park represents far more than this. He also set out for it to be sustainable for the next thousand years and it is a privilege to have been part of this vision and to be a small part in shaping the park’s direction.

The gardens and the managed forests are a big part of helping to communicate the big idea to visitors. The gently managed places, which take the rough edges off the wilderness, are part of making people feel comfortable in the areas that are accessible. Takano Landscape Planning, which put together the original masterplan, knew that the people and their comfort in the environment were important and, when I was asked to be part of the project in 2000, it was to help with creating a series of spaces that would provide the landscape with a focus for the public. 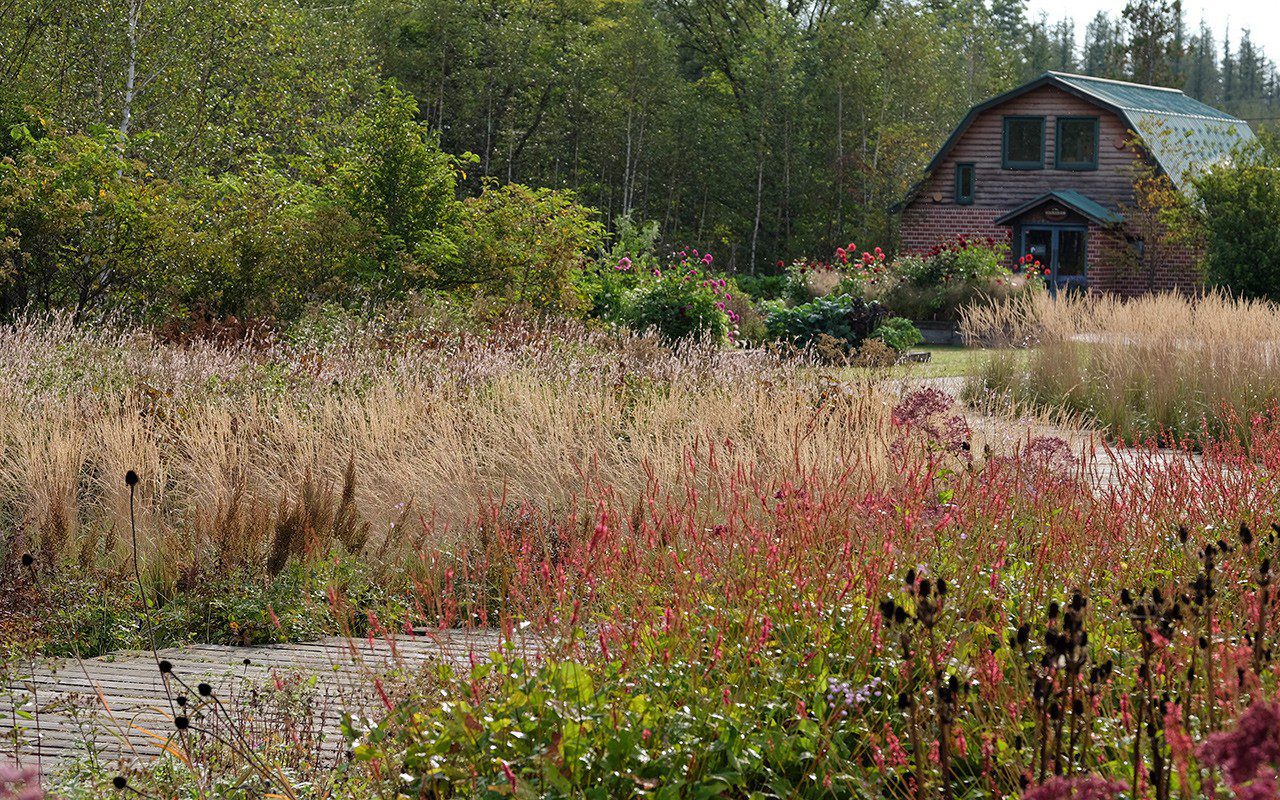 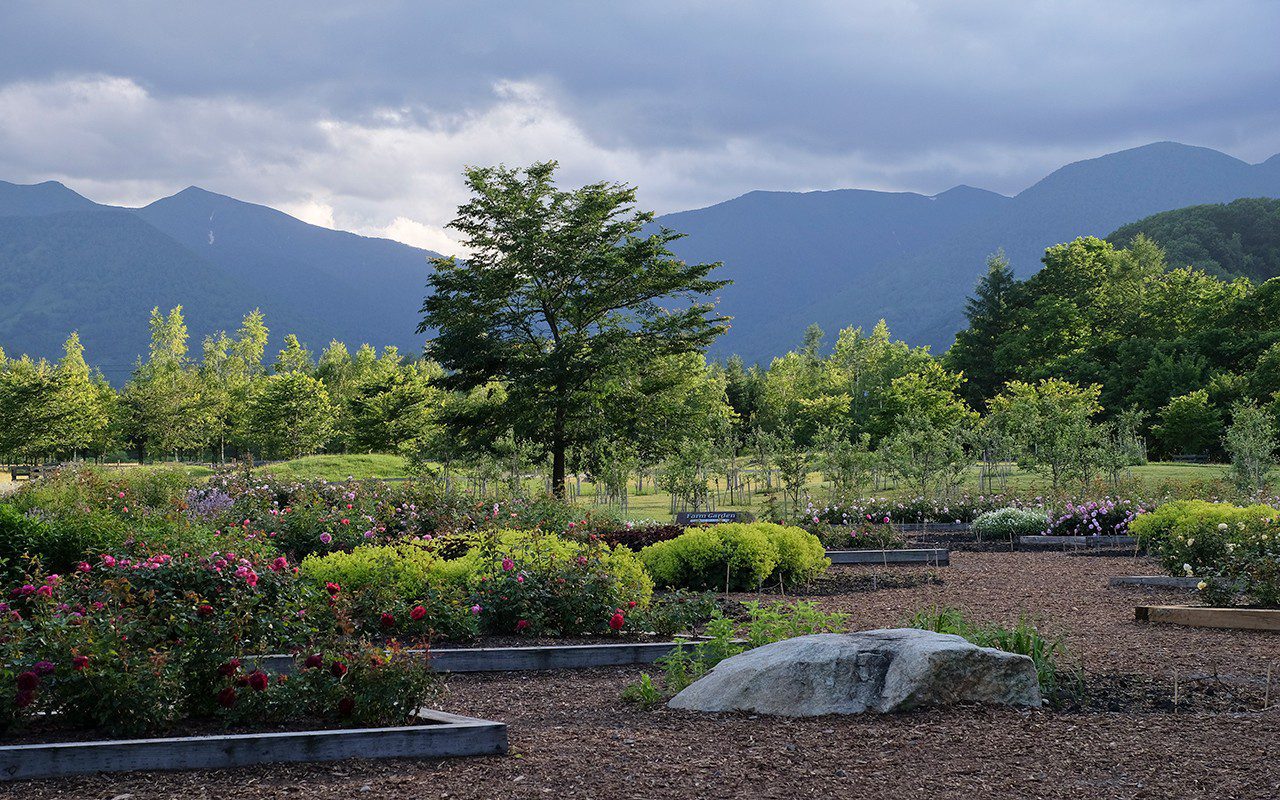 In their turn, the gardens we have since created have been key in making a ‘safe’ place and a link with the magnitude of the landscape, to literally ground the visitor in the place. A landform called the the Earth Garden, which reconfigured a clearance field that separated the visitor from the mountains, was the first of the projects to come to fruition. A series of grassy waves, echoing the undulations of the mountains beyond, now provides the visitors with a ‘way into’ the landscape. By exploring the earthworks they soon find themselves at the base of the mountains or at the edge of a mountain stream or a trail into the woods. The landforms extend to wrap another five hectares of cultivated garden, and area named the Meadow Garden, which was planted to celebrate the official opening ten years ago. Beyond that there is the Farm Garden where people can see a modestly-sized productive space with fruit, vegetables and cutting flowers and eat food grown there at the cafeteria. A goat farm producing cheese is the backdrop to this space, while most recently we have developed a Rose Garden of hybrid and species roses suitable for a northern climate and an orchard to test growing apples and other top fruit this far north. 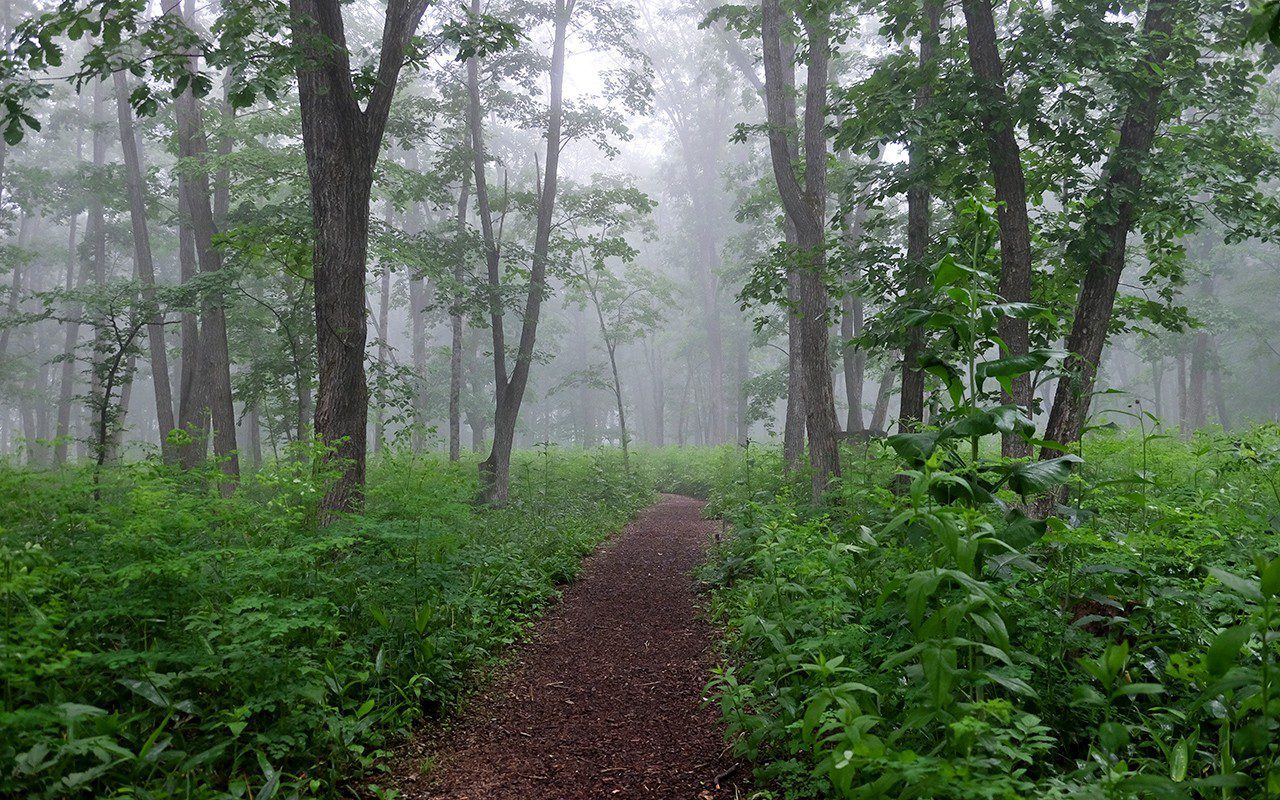 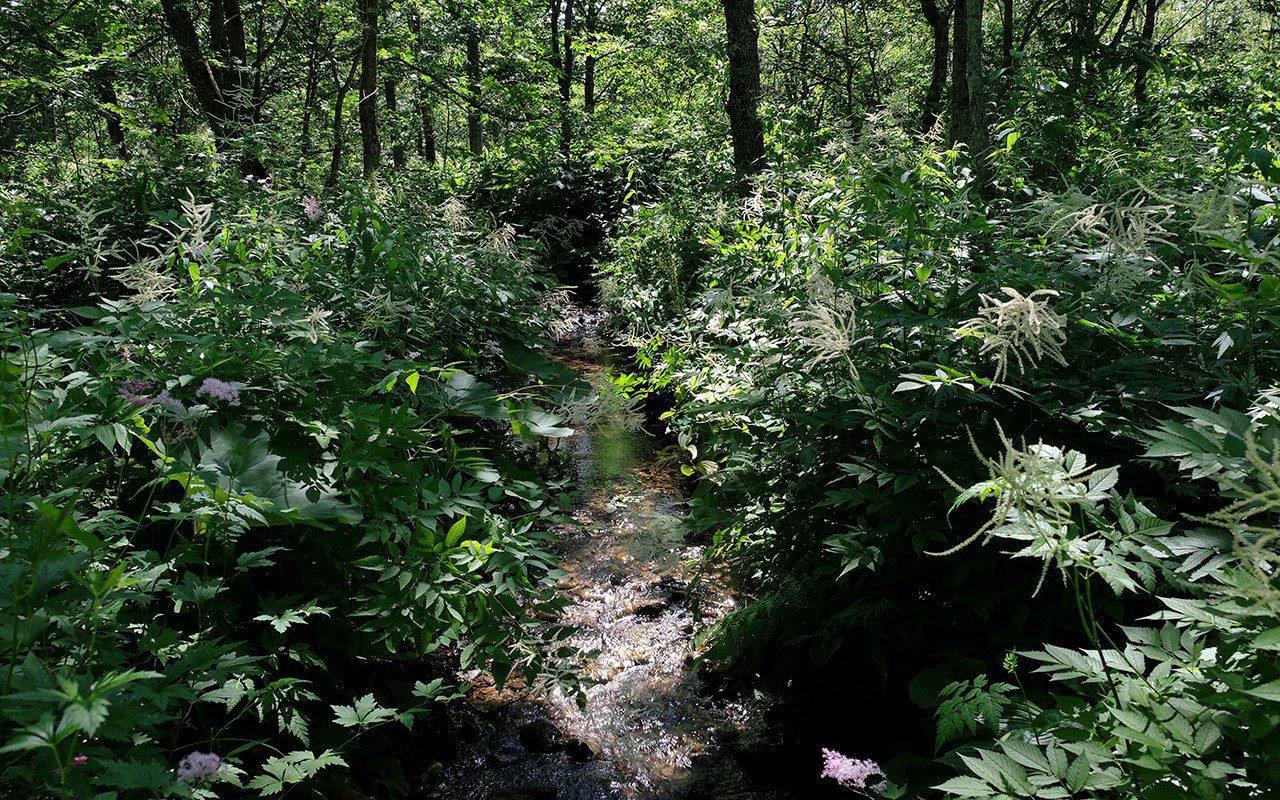 The Entrance Forest, where Fumiaki Takano had already made a start when I was brought on board, eases visitors in with soft bark paths and decked walkways that take them back and forth across the rush of mountain water that switches between the trees. The low native bamboo Sasa palmata, which took over the forest after its balance was disturbed when all of the oak was logged at the turn of the last century, has been carefully managed to encourage a more diverse regeneration of the forest floor. Repeated cutting in the autumn, coupled with the short summers that curtail its regrowth and stranglehold, has been diminished enough for the window of opportunity to be given back to other plants in the native seedbank. Wave upon wave of indigenous plants now greet the visitors. Anemone, Caltha palustris var. nipponica and Lysichiton camtschatcense seize the window after snow melt and, as oak woodland comes to life, the race continues with Trillium, scented-leaved and candelabra primulas and arisaema. By the time I arrived in late July, the woodland was tall with giant-leaved meadowsweet, cardiocrinum and lofty Angelica ursina. 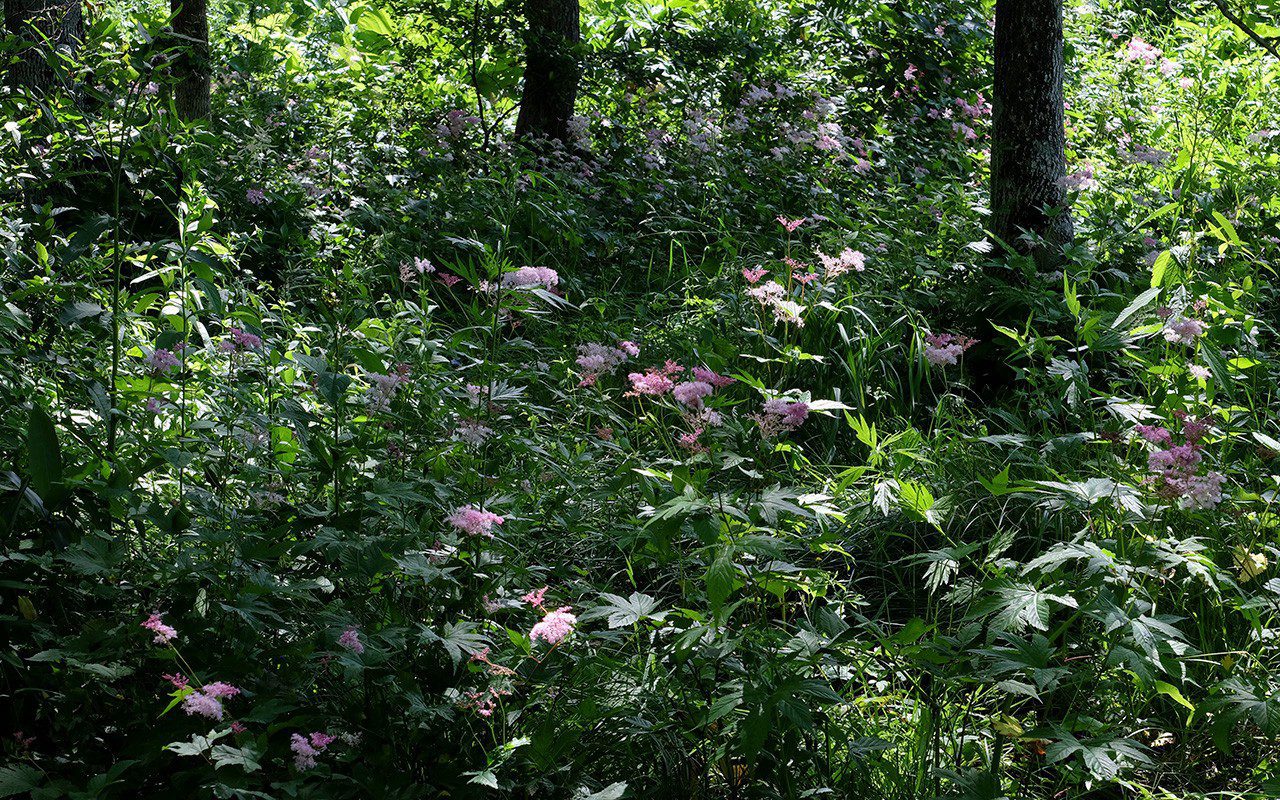 The Meadow Garden (main image), my primary focus with Head Gardener, Midori Shintani, was inspired by the woodland and the way the plants have found their niche and live together in successive layers of companionship. Sitting on the fringes of the wood where dappled light meets sunshine, it is divided into two main parts by a meandering wooden walkway. The lower areas emulate the edge of woodland habitats, while above the path the planting basks in full sunshine. The planting is further divided by swathes of Calamagrostis x acutiflora ‘Karl Foerster’, which separate the different colour fields, so that the yellows are held back as a surprise. The movement of the mountain winds is caught in their plumage to animate the garden.

The plantings integrate Japanese natives with plants from other regions of the world that have similar climates. North America and parts of northern Europe provide the ‘exotic’ layer in the garden and their inclusion draws attention to the Japanese natives that are mingled amongst them. Plants such as the Houttuynia cordata, Hakonechloa macra and Aralia cordata. Everyday plants in Japan that are given a new focus. In terms of my own gardening process, these plants were the exotics and it has been such a fascinating process to reverse my experience of the exotic/native balance. Native Lilium auratum, the Golden-Rayed Lily of Japan, and the giant meadowsweet, Filipendula camtschatica, are teamed with Phlox paniculata ‘David’. Sanguisorba hakusanensis, the extraordinary pink, tasselled burnet is in company with Valeriana officinalis and Astrantia major ‘Hadspen Blood’. 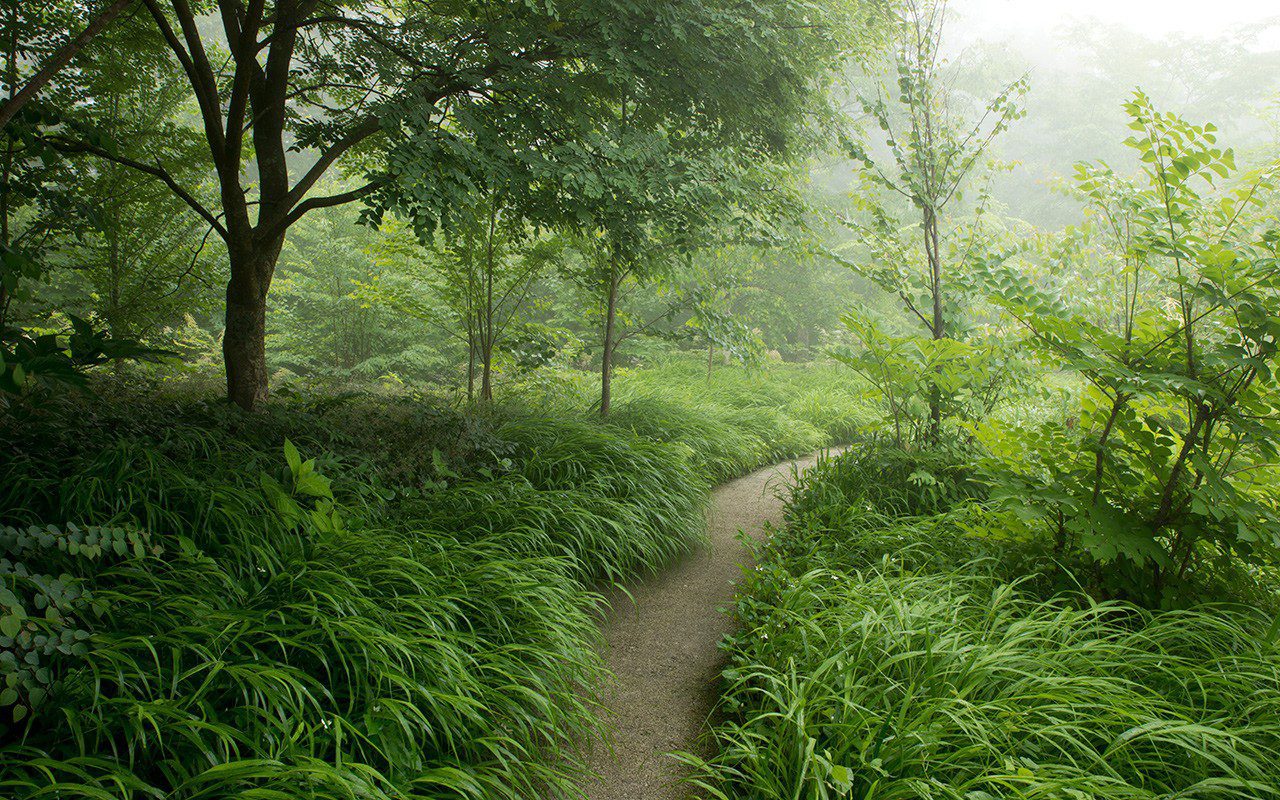 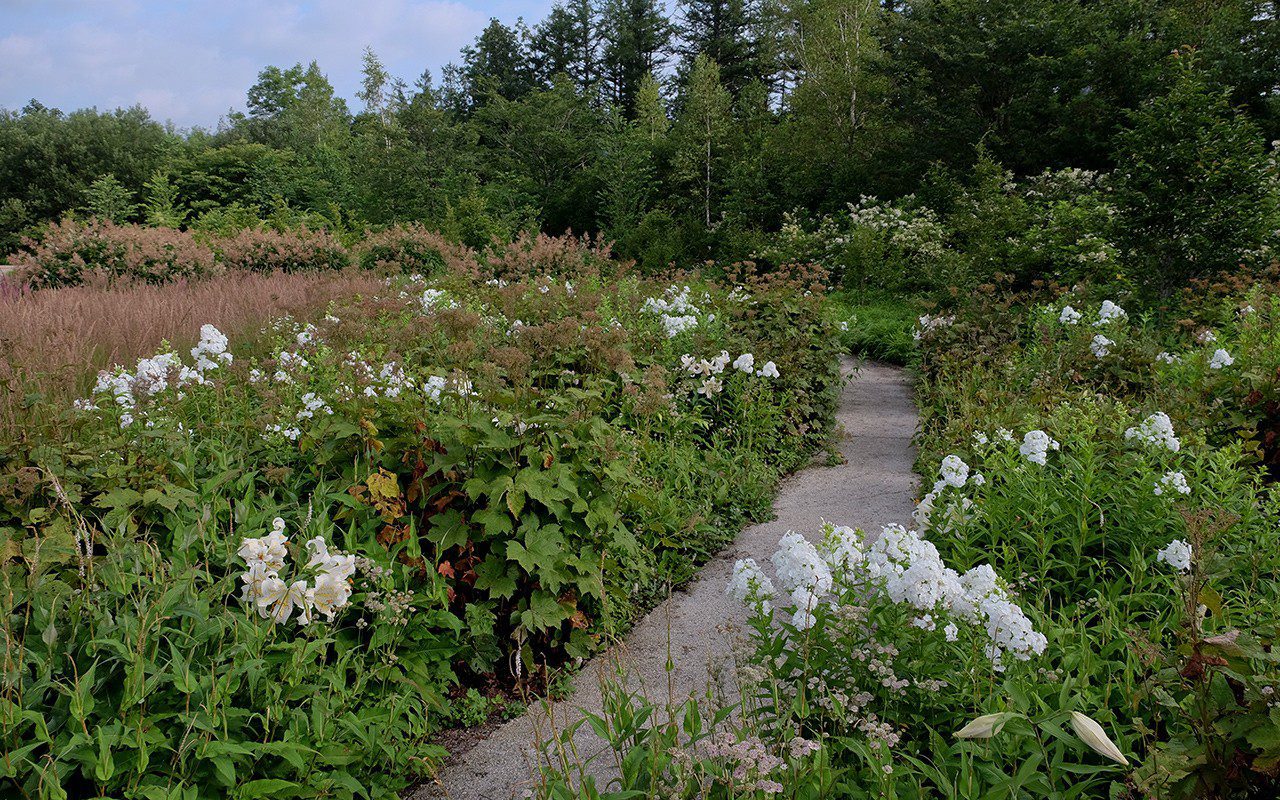 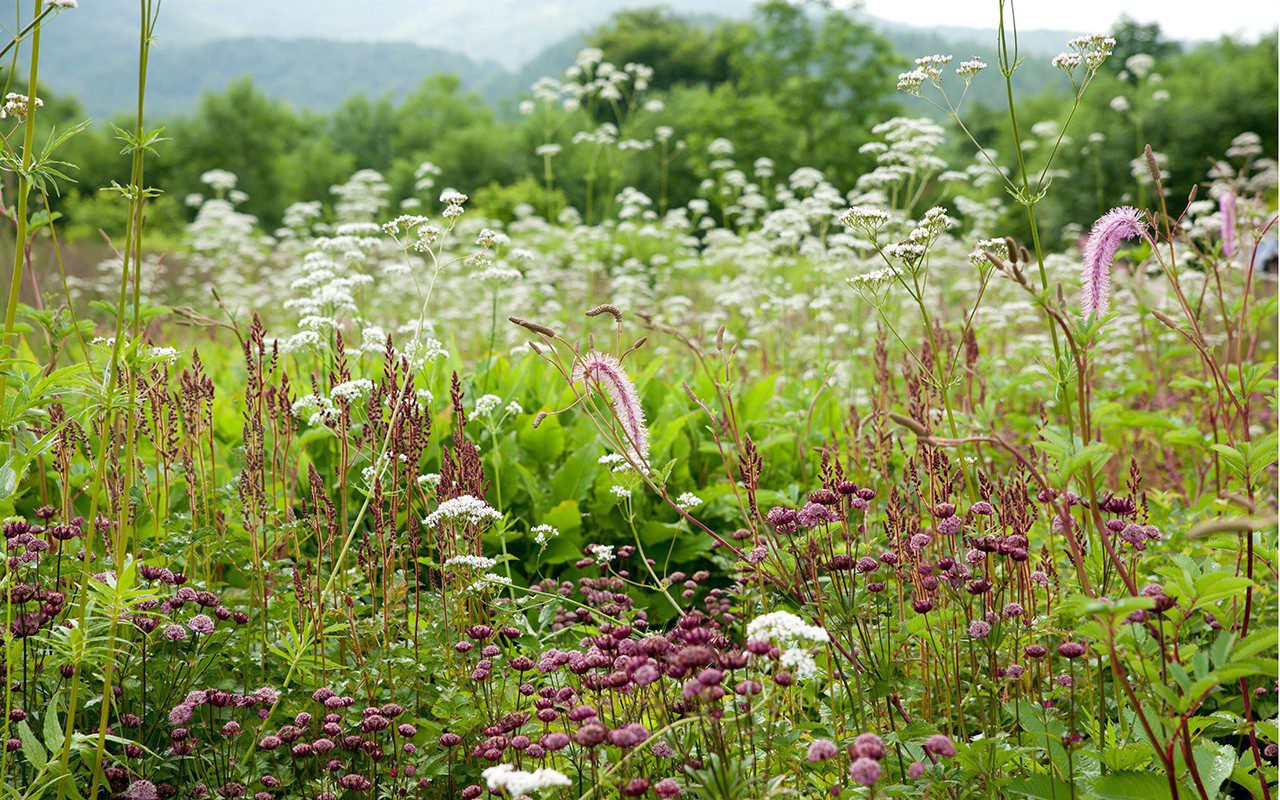 The original planting plans were designed as a number of individual mixes, planted in drifts to allow the planting to flow across the site. Each mix contained a small number of species, usually five to seven, that were planted completely randomly. The percentages in the mix were critical, with a small number of emergent plants such as the Cephalaria gigantea to rise above larger percentages of individuals that would knit and mingle at lower and mid-level. Now that I look back it was a brave move, because it was entirely dependent upon the head gardener to steer and monitor.

Midori has been more than I could have hoped for in an ally on the ground and our yearly critique and analysis of the plantings is a high level conversation that looks both at the big picture and also at the detail. Of course, there have been adjustments to refine each mix as they change yearly with plant lifespans, climate and vigour, which drive our response. But we have also needed to make changes to keep the garden moving forward, introducing new plants and swapping or reducing the numbers of those which have become dominant. For instance, we have found plants that will happily coexist in a demanding matrix of twenty five companions in the wild, can take their opportunity to dominate when given just a handful of company. 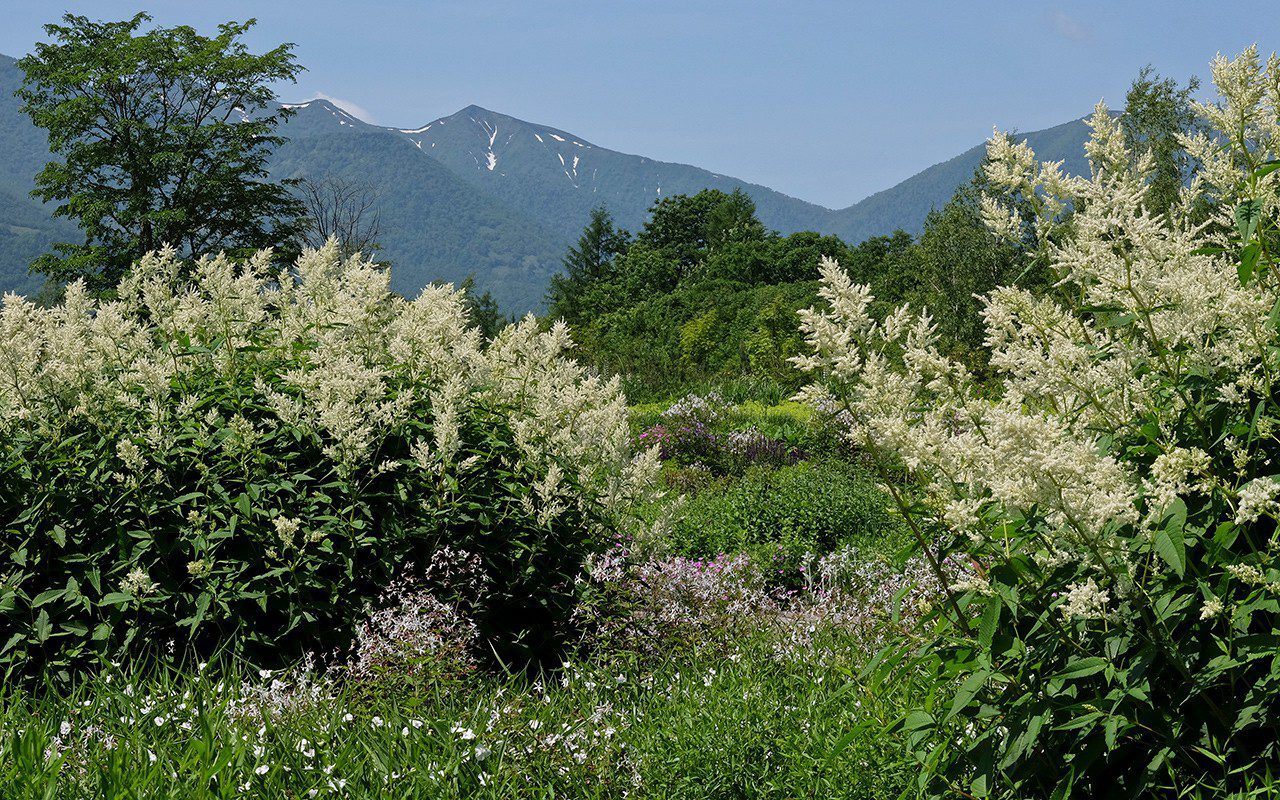 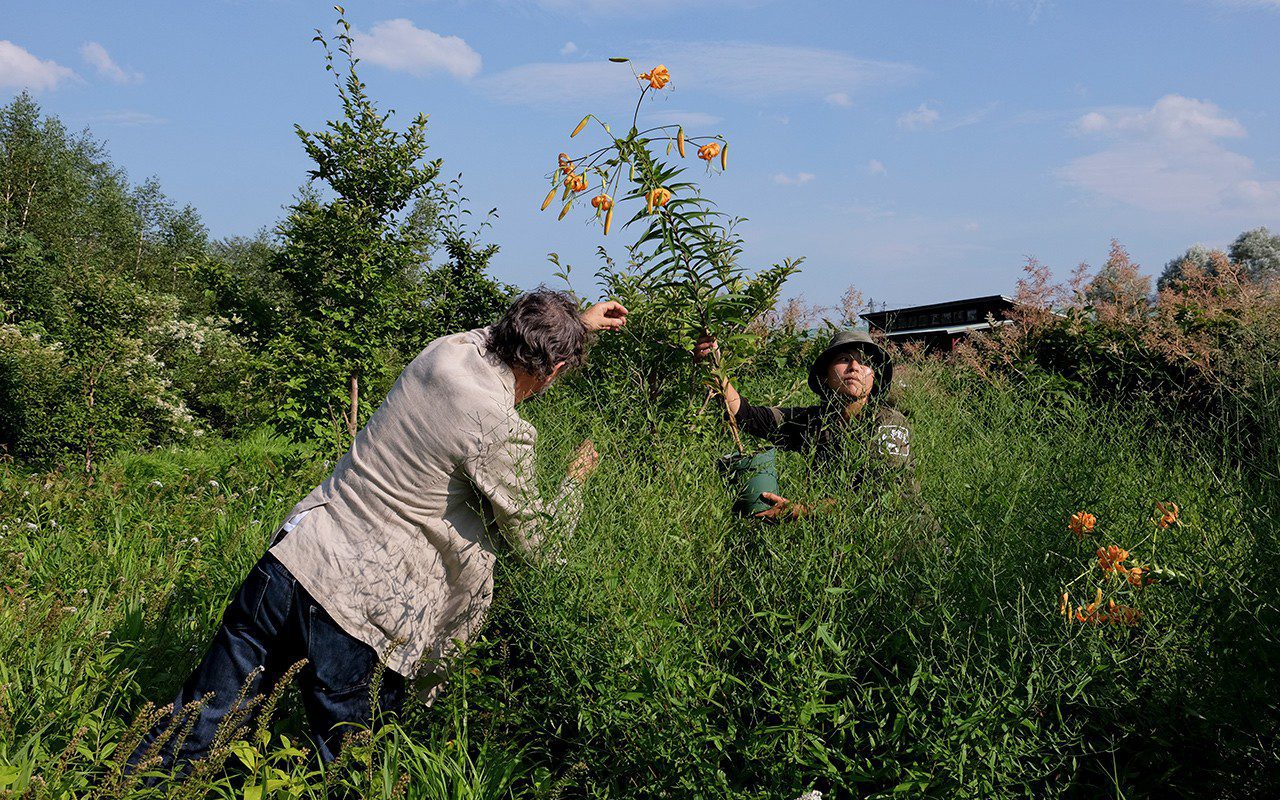 Last year, to challenge the thousand year brief of sustainability, a tornado swept across the island. It hit last summer, just before I visited and I arrived to see the carnage. The mountain water had swelled the streams that braid the site to rip and tear and deposit a silver sand from afar and boulders that are now new features. Miraculously the waters divided to either side of the Meadow Garden, but they swept away all but two of the bridges, which have never been found. We were left feeling very small and of little consequence within the time frame that had been set for the preservation of this place.

The repairs have been slow but sure and in scale with what is possible. New shingle banks have been embraced as the new places and opportunities that they are. Already they are being colonised. It is the gardener’s way to repair and to move on, but we have been humbled nevertheless. Midori walked me through the garden, pointing out ‘weeds’ that have been swept in to the planting that were never there before. And there are anomalies that are hard to get to grips with that point to changes of another scale. Some plants have taken a hit a year later to sulk or fail, and we do not know why, whilst others have seized life with a new vigour as if the charge from the mountain has revitalised them. With ten years under our belts and the knowledge we have gained that is specific to this place, we are adjusting again and moving on. On to a second decade and the certain changes that we will be responding to, to move with it.