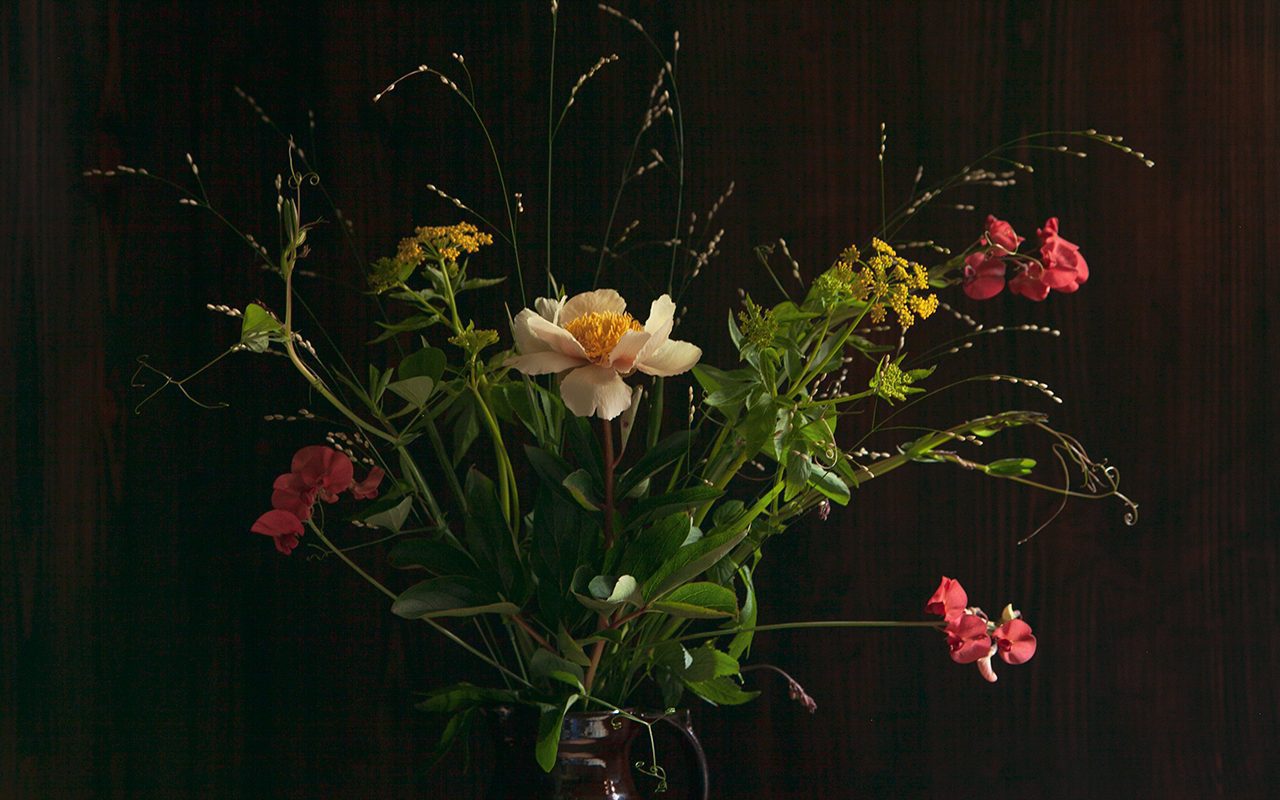 It has been good to have had rain in the last week. The water butts are brimming where they were running low and the spill of cow parsley is narrowing the lane. The late spring garden has responded accordingly. Plants never look better than immediately after a natural watering, the rain seemingly charged and the growth enlivened with a refreshed and tangible energy.

The changes now are exponential. Mayflower balloons in the hedgerows to stop-start them cream and electric green. The Tump, which rises behind the garden, is now dusted with dandelion clocks. Silver, where just a fortnight ago the dandelions rolled the hill in gold.

Things are happening fast in the garden too and we have been pleased to have a run of early peonies, which handsomely open the season. The Molly-the-witch (Paeonia mlokosewitschii) has lasted the best part of a fortnight where the weather has remained cool. A luxury this year compared to the usual week of flower.  Paeonia ‘Claire de Lune’ has taken the baton almost perfectly, opening the first few blooms as Molly has dimmed. Though the pale, luminous colour is similar, ‘Claire de Lune’ is a different animal, rising up strongly with florists’ Paeonia lactiflora clearly in its blood. The foliage is dark and lustrous and upright to three foot or so with a plant that decides it likes you. Friends who were in residence at Stoneacre in Kent introduced it to me first. They had it combined with ‘Graham Thomas’ roses, which were to follow, but continued the memory of yellow. Together they welcomed you nicely by the front door.

For now, my single plant resides in a slow-burning trial of a couple of dozen garden peonies in the cutting garden where their opulence can be enjoyed for what it is and not compete with the naturalism of the garden proper. When I know more – for peonies take a few years to really let you know what they are made of – ‘Claire de Lune’ has enough elegance and ease to find her way into the garden. The single, primrose yellow flowers pale as they age and if you bury your nose close to the yolky boss of stamens, you will be rewarded with a lemony perfume.

In the garden we have a run of Zizia aurea that follows the woody Paeonia delavayi that frame the entrance. Yellow is good at this time of year when things are fresh and the sombre mahogany red of the peonies benefits from the zesty injection provided by the Golden Alexanders. Marina Christopher of Phoenix Perennials introduced me to Zizia first and I am pleased it has taken well here to bob and hover at about knee height in the garden. In the Americas, where it grows in deep damp soils towards the edge of prairie grassland, Zizia is happy to adapt to sun or light shade. It is an adaptable plant here too, as long as the soil is retentive.

I combined this delicate umbellifer with scarlet Tulipa sprengeri in my Chelsea Flower Show garden in 2015, planted in wildflower turf to the edges of the Trout Stream. I am sure that in real-life our mild, damp winters would not allow it to grow in grassland here. Where prairie grasslands become completely dormant in cold American winters, our grasses continue to grow off-season and choke perennials that are not adapted to our plant community. In the garden I have teamed it with Aquilegia longissima and the beautiful Melica altissima ‘Alba’ which is happy in relaxed company and dances in the slightest breeze, the flowers pale, silvery and shimmering.

Last in the bunch is Lathyrus rotundifolius, the Everlasting Persian pea. Hailing from Turkey, but equally happy in our damper climate, it is up early and has already clambered to the top of a twiggy hazel support. My solitary plant is too far back in the bed to be appreciated so, rather than attempt to move it, I saved seed which was sown last autumn and germinated in the cold frame before the onset of winter.

As with sweet peas, which always make a better plant from an autumn sowing, I have a clutch of healthy young plants which will be found a home in the garden where I can get closer to admire their delicacy. Although it is without perfume, this pea is a treasure and being light of growth they make good companions. They will probably combine well with the tree peonies which, once they are over, will benefit from the patter and smattering of their brick red flower. I can see them now, trialled and tested for colour in this posy, making equally good bedfellows in the garden.