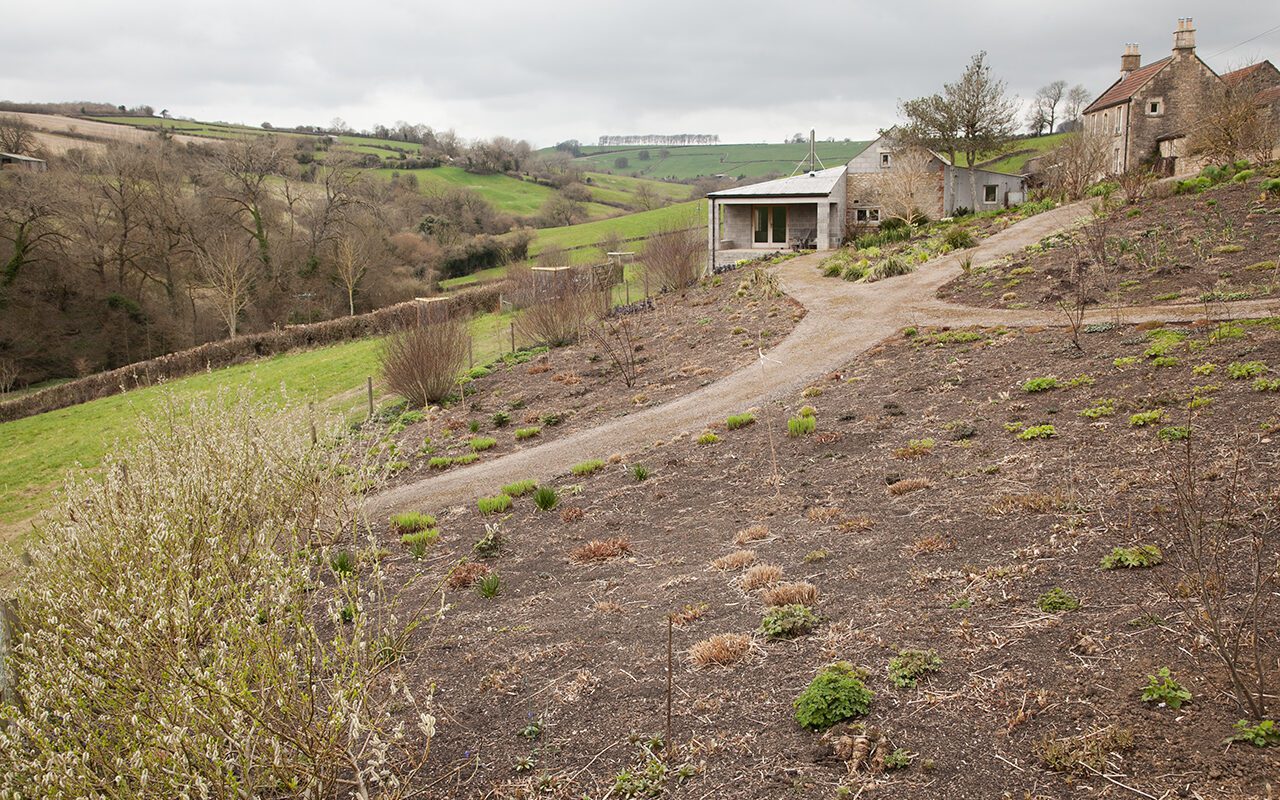 The garden is cleared now of last year’s growth and what has stood the winter. It is a process that runs over a month of weekends and witnesses the last grips of winter and the first of new life. The meaty red nosing of peonies, almost as good in shoot and anticipation as later in flower. Newness appearing around them daily. Lime green shoots on the hemerocallis, the visible inching of regrowth where the pennisetum were cut hard back just a week ago. It is a garden gathering pace and we need to keep moving now to ready it with final edits before mulching. The last big gesture and the equivalent of smoothing a quilt.

It is four years, almost to the day, since the first section was planted. The second half followed the autumn of that year and the two halves are all but indistinguishable now that they have grown in. Already we have made the first big splits, our hearty ground rearing unexpected bulking in some of the perennials. Sanguisorba that required a crowbar to lever them from their grip. One Amazonian hellebore, apparently with extra genes, did so well in every department it just looked out of place. After overwhelming its companions for four springs in as row, I finally went to battle last week and lifted it. The struggle took time and eventually I heaved it out with a huge rootball that had to be rolled into the wheelbarrow, for it was too heavy to lift. I put it, carefully bundled with a label saying ‘Please help yourself.’, out on the lane.  Though it was a Sunday afternoon it had gone within the hour.

These changes make the difference. With half the sanguisorba split randomly, they will feel like a family with differing generations rather than a pack of heavies. And so the garden retains a feeling of having evolved here, with the weights of the plants in balance and differing much as they do in the meadows. Mother plants and their offspring.

An evolving garden becomes more interesting for the weave that inevitably happens when you begin to see the self-seeding and my final edit before the mulch goes down is to manage this migration. Digitalis ferruginea that would rather be on the edges and not in the shadows of the middle of the beds. Their tall poker-black seed heads cast a million and one seedlings, not too far, but far enough to jump the path.  The seedlings that fall into the crowns of anything that is slower off the mark, like panicum, will be winkled out. Those that fall into a gap where I can imagine their spires ascending will be left for the feeling of having arrived by themselves. Nothing makes a garden feel more lived in than an opportunist.

Not all the interlopers are welcome and the mulching will smother the majority of the seedlings. Where I feel we might need their presence – or that of black opium poppy or florist’s dill – we do “intelligent mulching”, a practice that Great Dixter’s Fergus Garrett told me about, where you spread the mulch more lightly or not at all where you want the seedlings and deep enough to smother where you don’t. The method works with self-seeding annuals like red orach and Californian poppies and short-lived perennials like Cenolophium denudatum. The beautiful creamy umbels are a good leveller in a planting, sitting easily amongst other perennials and, like the digitalis, feeling most comfortable where they have arrived by themselves.

Some of the interlopers, such as the Ranunculus ficaria ‘Brazen Hussy’, are wilfully oblivious, setting seed after you have mulched and finding a crevice to set up a little tuber that goes completely un-noticed until suddenly there they are. I have had this plant since I was a teenager. It probably came from Great Dixter originally as it was selected by the great Christopher Lloyd himself, found in the surrounding woodland, and named appropriately. I do not mind it moving about and I have no idea how it moves so far, the seedlings sometimes springing up in another part of the garden entirely. Leaves as dark and iridescent as beetles’ wings and flowers as gold and uplifting as the very season they make their own. Let them move about as a ‘Brazen Hussy’ might, for they are gone and have not imposed themselves by the time the growth closes over around them.