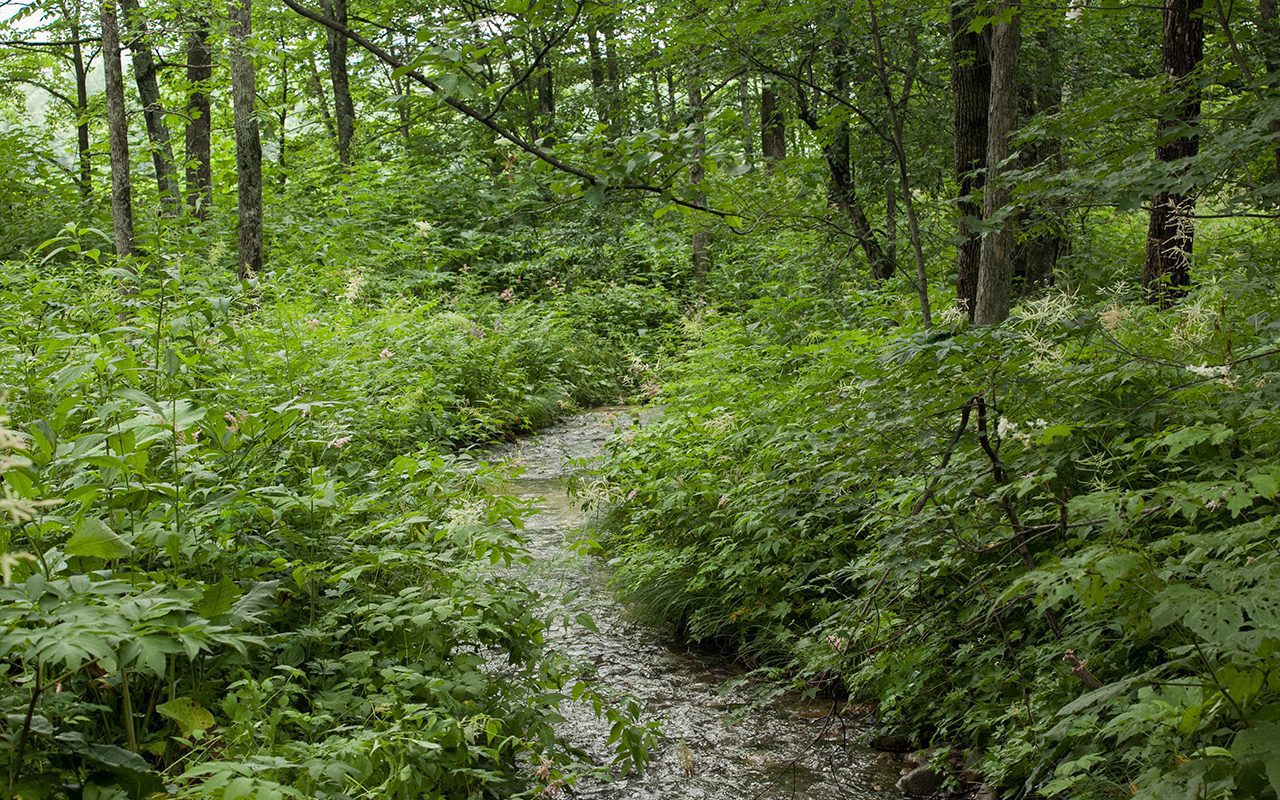 We have been visiting the Tokachi Millennium Forest in Hokkaido this last week. It was my annual visit to meet with Midori Shintani, the head gardener, to gauge the past year’s developments and help move the garden gently forward. Gardens are never static and the elemental nature of the surrounding forest and the backdrop of the Hidaka Mountains has a strong influence here. In 2016 a typhoon hit the forest, swelling the braided streams and charging them with boulders that swept away the footbridges. Miraculously the waters parted around the garden, but we have only just recovered from the influence. This past winter the eiderdown of snow was not as deep enough in parts to insulate all of the plants effectively and so the minus twenty degree winter has taken its toll in some areas.

Such are the challenges faced by Midori and her assistant head gardener, Shintaro Sasagawa, and when I arrived they were already well advanced on replanting the areas that had been worst affected. This year – for with contrary mountain weather every year is different – we found the garden in a cool, damp week. The cloud hung heavy to shroud the mountains and the Hokkaido drizzle bowed the perennials in the garden to the ground. The northern climate here compresses the summer so that it rushes fast in the growing season and, though the garden was pausing between the first flush of early summer and the coming wave of high summer colour, we saw significant change in the five days that we were there. Persicaria amplexicaulis ‘Firetail’ starting to open its flame-red tapers and Cephalaria gigantea reaching ever taller over a river of Achillea ‘Coronation Gold’.

Huw accompanied me this year because we were also meeting to discuss the book I am currently writing to be published by Anna Mumford of Filbert Press next autumn. The richness of the Tokachi Millennium Forest and the way that it is being tended has a growing following and so the book feels timely. Midori is contributing to the book and one of the most important themes she will write about is the ancient Japanese tradition of satoyama – the practice of living in close harmony with and showing reverence for the land. A renewal of this approach, where the people make the place and the place makes the people, has been a central component in the genesis of the gardens.

We met with Kiichi Noro, a highly respected landscape photographer in Japan, and a man of great humility who has been recording the forest and gardens for the last 5 years. He has delivered around 40,000 images, which need to be distilled to ensure that we capture the gardens and all the nuance of the forest influence throughout a working year. Huw has been working on the picture selection and look of the book with Julie Weiss who is designing it, and who also joined us in Hokkaido. Julie used to be an art director at Vanity Fair magazine before changing direction three years ago, since when she has immersed herself in the world of horticulture, working as a trainee gardener at Great Dixter and travelling to see and learn as much as she can.

We are also doing what we can to provide educational opportunities. Midori and I led a Garden Academy this week, spending an afternoon talking 40 attendees – many of whom had travelled from other cities in Japan, and one very keen group from Korea – through the principles of the Meadow Garden and how its sits alongside the gently tended forest that inspired the planting. Midori has also taken gardeners from Great Dixter on an exchange basis as well as student gardeners from around the world who have taken it upon themselves to write to her. This year there are three volunteer gardeners from overseas working in the garden to gain a deeper experience and understanding of Japanese gardening practice and culture in general. Two young English designers, Charlie Hawkes and Alice Fane, who are staying this year from snow melt to snow fall and Elizabeth Kuhn, a horticulturist and nurserywoman from America with a particular interest in the native flora.

The woodland is the ultimate inspiration for the way that everything is done here and I return to it constantly to provide me with focus. In the week we were there we watched it moving through its final peak before dimming now that the canopy of magnolia and oak has closed over. Stands of Cardiocrinum cordatum var. glehnni stood tall and luminous to scent the pathways. The glowing purple spires of Veronicastrum sibiricum var. yezoense stood sentry at the forest edge. The vestiges of Trillium and earlier flowering Anemone and Glaucidium are already in the shadow of the Angelica ursina which were pushing up in a last great bolt of energy to flower. Most had not yet reached their full height, but those that had broken into flower stood twelve feet high with the parasols of Petasites japonicus ssp. giganteus at their feet.

Walking through the forest was as spellbinding as ever and you cannot help but feel charged by the experience of being there. Now all we have to do is try to capture that on the page so that the forest reaches beyond its boundaries, as it should.